and now I know it was real designs,we can open new topic for it.
S

hesham said:
and now I know it was real designs,we can open new topic for it.
Click to expand...

Only if there's more to add than these pictures, which I'm not sure about. Although it certainly has nothing to do in this here topic, it's not completely unrelated as Horkey was a former North American engineer, deeply involved in design and development of most fighters during and after WW2. He died in 1996 and his design died with him.

Similar concept.....
I have never seen the original drawing of Me509. Sorry for off topic.

GTX said:
This was supposedly a proposal that North American had come up with in case the war had continued. As you can see, it had forward swept wings as well as an advanced (specifically how I don't know), a Westinghouse jet engine in the rear fuselage and a tricycle undercarriage.
Click to expand...

I ran across this in NARA during this week in the Sarah Clark Files. Apparently this was an unsolicited proposal that NAA gave to the USAAF in the hopes of maybe pushing the Mustang forward.

jimbrooks said:
This book does have 1 or 2 pages of details and pictures about a rocket-powered P-51.
Click to expand...

"P-51D Flash" Program. Begun during the winter of 1944/45 to counter German Jet fighters. Was intended to counter them by providing the P-51 and P-47 with a brief one time burst of speed to 500~ MPH to catch up with jets.

Damn, I wish Steve Pace was still with us. He'd love the stuff I found. :-[

The AAF during the development of the P-51H just could not make up it's mind over armament:

They tried pushing a 4 x 20mm armed pair of wings onto NAA, to which NAA replied "sorry, we're too busy with detail engineering on the P-51H and P-82 project to do a change order for 20mm in the P-51H."

Last week I ran across the following document in the P-51 folder at NARA II in P-26 Sarah Clark:

1. Confirming our conversation, the following Serial Numbers were assigned:

Was there plan for P 51 Mustang follower with 20 - 30 mm cannons and contra props or 8 bladed propeller ( maybe forward swept wings, I am not sure) ?
Someting with R mentioned in the name. I am not sure is this real "what if" Project or somebodys imagination.
I remeber seeing an 1:48 plastic model or RC build picture in internet, but can`t find that picture.
Please can somebody help ?

The forum search function may help

Nice, interesting you drawn in cuffed prop blades ---- my conversation I've had with David Birch who co-wrote the Rolls Royce Heritage Trust book called RR and the Mustang, said it would have been a De Havilland prop. He also told me it would have been armed with three 20mm cannon. It wouldn't have had the wing root leading edge extension either, RR used wings from issued 'surplus to requirement' Mustang Mk.1. There is actually a 1/10 scale wind tunnel model of it still in existence where I was able to check my model dimensions from. At the time though, it was a Private Venture Fighter, not a Flying Test Bed.

Just your standard TF-51D. Cavalier also did two-seater conversions, but those had different canopy.
R

The USAAF only bought a handful of TF-51D trainers shortly after WW2.
Cavalier added second seats to a few of the P-51Ds they overhauled during the 1960s. Cavalier canopies look almost the same as stock P-51D canopies. Cavalier conversions can be distinguished by their taller tails and wing tip fuel tanks.
All the Cavalier modifications were incorporated into the Piper Enforcer COIN prototype of the -970s. The Enforcer also got a turboprop engine and a longer, re-lofted aft fuselage, the US AF never ordered production. We wonder what political forces drove the Enforcer project????

Later civilian conversions to two seats have a horrid mosh-mash of rear seat pans. Some after-market rear seats accept stock USAAF seat-type parachutes, while others require custom-sized back type parachutes.
I have packed pilot emergency parachutes for all the different P-51 variants. Many of my customers competed at the Reno Air Races.
Air racers did a wide variety of modifications to become more competitive in Cleveland or Reno air races. They started by gutting race planes of superfluous military equipment like guns, radios, armour, etc.
Cleveland Air Racers tried a variety of ways to increase range: wet wings, etc.
Reno racers went the other way by clipping wing tips and sometimes horizontal tails as well, but some found that they needed taller vertical tails to handle increased speeds and horsepower.
At least one racing Mustang was retro-fitted with Learjet wings!
A few racers even tried to remove belly radiators to reduce drag. A few Mustangs races with evaporative cooling, but never medaled.
During the late 1940s, one smooth-bellied P-51B got wing-tip radiators that resembled ram-jets from a distance.
One or two racing Mustangs even got RR Griffon engines that are distinguishable by the counter-rotating propellers.Most racers got tiny canopies and extensive detailing to further reduce drag. Think about Bondo and micro-balloons and thousands of hours of hand sanding to hide skin joints.
These days, racing Mustangs almost look like stock P-51Ds with smaller canopies. They get much of their extra speed by boosting manifold pressures up to 50 inches!
R

The only production jet-powered Mustangs were the 33 FJ-1 Fury fighters built for the US Navy. The first batch of Furies used P-51D wings and tails to support a completely new fuselage. Later, NAAA morphed the Fury into the F-86 Sabre swept-wing jet fighter. The last batch of FJ-4 Furies shared no common parts with the first batch.

Aubi said:
Just your standard TF-51D. Cavalier also did two-seater conversions, but those had different canopy.
Click to expand...

Not so, I believe. Take a look at the image below. At 'A', is what appears to be a flush-type air intake, and at 'B' there's some sort of air outlet that I've never previously seen on a P/F-51.
My thought is that this version was to be powered by the same engine, or variant of, the engine used in the F-82 Twin Mustang . . .

The belly scoop is F-82ish, extending back to the LE of the horizontal.
K

Just what I was thinking . . . hadn't noticed until now, there is no kink in the inboard leading edge, so not a 'D' . . . I'd still like to know what those'extras' are on the cowling, though.

The tail is more H-ish, I agree. So does the belly scoop. For me, the rest is probably fault of the artist who did the drawing. No such thing on the cowling of P-82 either.

It has a fair few hardpoints, proposal for a ground attack variant?
J

Also, note the similarity between the canopy and that of the T-28. Based on the exhaust, I'd say it had Packard-Merlin power, rather than the Allisons that powered most of the F-82s.

I've read that the F-82's adoption of the Allison engine was driven by the unavailability of US-built Merlins rather than engineering considerations. All Merlin-specific production hardware was apparently scrapped with the end of P-51 production in compliance with the licensing agreement.
I

taildragger said:
I've read that the F-82's adoption of the Allison engine was driven by the unavailability of US-built Merlins rather than engineering considerations. All Merlin-specific production hardware was apparently scrapped with the end of P-51 production in compliance with the licensing agreement.
Click to expand...

I've read the same thing. But it nonetheless looks like a Merlin in the trainer. The Allison did not stay in production very long either. So I'd speculate that the trainer would have been planned around existing engine stocks until Korean War demand consumed the inventory.
K

The story I read it was something to do with the licensing cost Rolls Royce wanted for the Merlin production post-war that killed the Merlin powered Mustangs.

From the book, The American Fighter.

On a side note: 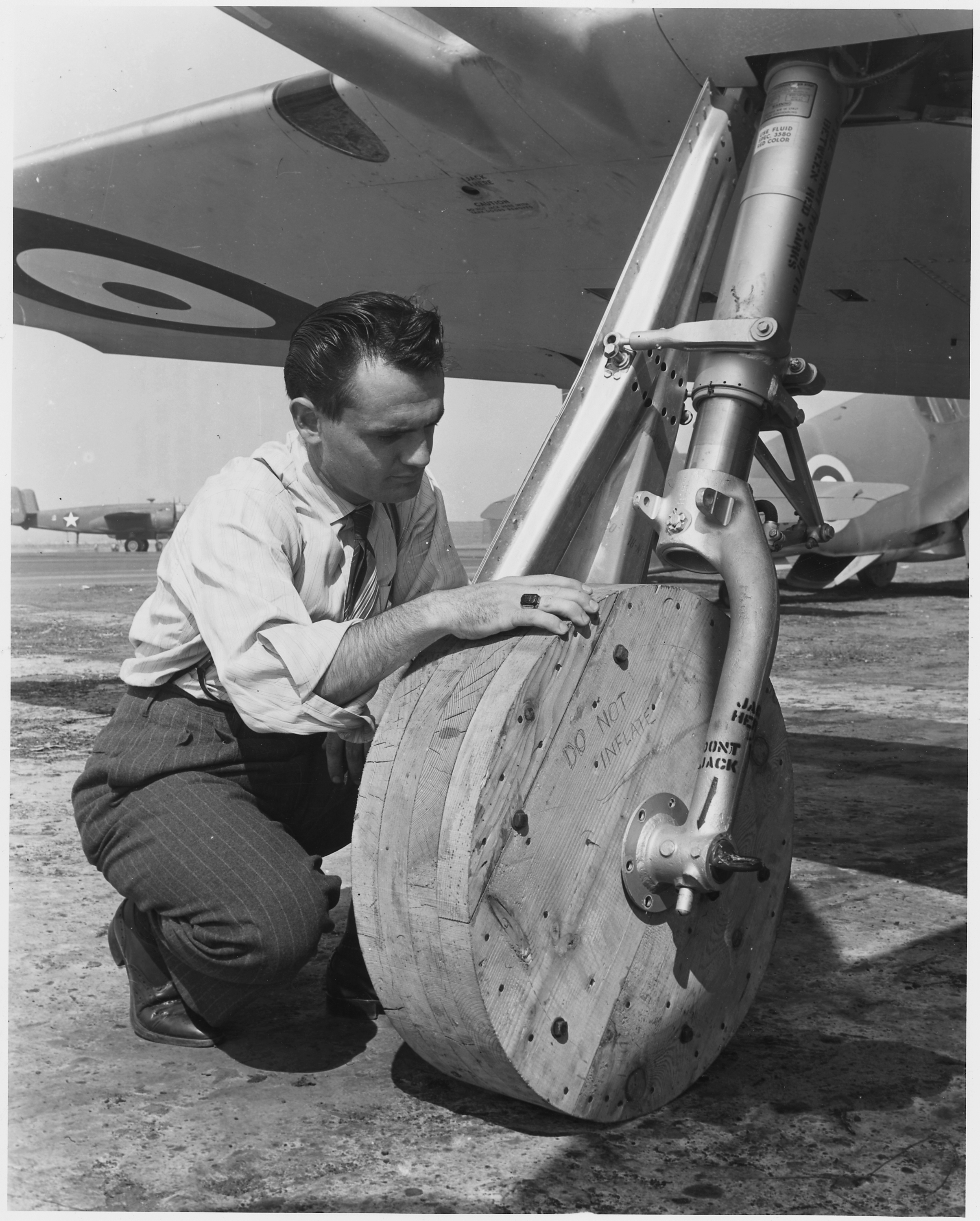 Photo: Alfred T. Palmer. These weird wooden wheels were fitted to the early Mustangs -a British Mustang IA in this case- to move them round the ramp, North American Aviation’s Inglewood. To s…

Okay, there's a Mustang variant I've seen in only one picture in Debden Eagles, a pictorial history of the 4th Fighter Group. It appears to be a P-51D with the aft canopy split into two parts to allow entry to a second seat behind the pilot and it appears to have radar antennae on the wings.

Anyone have any information?
J

Assigned to 336FS, 4FG, 8AF USAAF. This aircraft was a specially modified P-51D Mustang. It had its fuselage fuel tanks removed, a second seat fitted in the rear for the radar operator and mounted a radar antenna on the starboard wing. This aircraft was the personal mount of Colonel Everett W. Stewart.

taildragger said:
I've read that the F-82's adoption of the Allison engine was driven by the unavailability of US-built Merlins rather than engineering considerations. All Merlin-specific production hardware was apparently scrapped with the end of P-51 production in compliance with the licensing agreement.
Click to expand...