The E-155UVP as STOL aircraft project.

Merged topics. Here's a picture published in a recent Russian book about MiG by Eksmo which is an early Ye-155 layout with a strike cruise missile under the fuselage. Note the canard foreplanes on the nose and the more delta-looking wing shape. An inboard view of the same design was in the recent Red Star 34 MiG-25 by Yefim Gordon.

You can see the family tree to Ye-150/152 in this design. Ventral strake and tailplane are close. Wing has a dogtooth but seems largely delta still. Forward canard was intended on Ye-152M. Difficult to tell if its twin vertical tails. 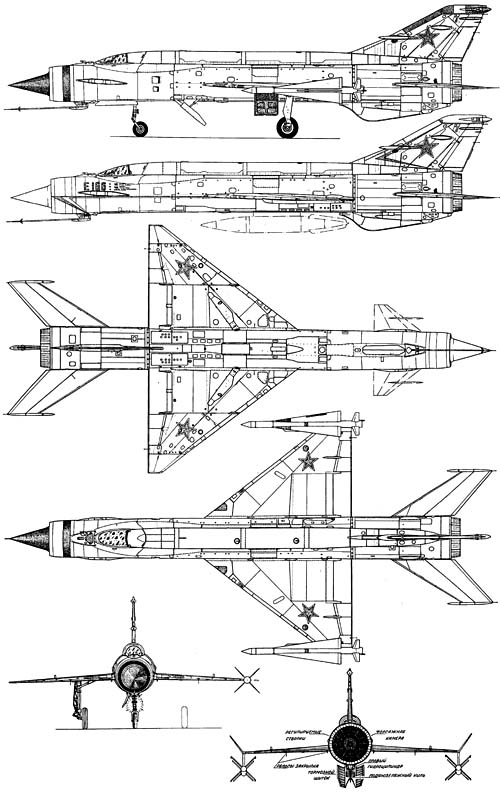 In line with the directive of the Council of Ministers dated 5 February,
1962, a provision was made both to further develop the E-155
R15B-300-powered aircraft in the reconnaissance aircraft and interceptor
variants and to convert two E-152s for testing elements of the S-155
intercept system being under development. In accordance with that, it was
envisaged to fit the E-152/1 with new R15B-300 engines and carry out its
flight trials. Besides, a decision was taken to equip the E-152/2 with the
Smerch-A radiocontrol and homing system, as well as with K-80 missiles in
order to test and prepare them for the E-155P interceptor.
In 1962, a working draft was developed with all necessary drawings issued.
The work on conversion of the E-152/1 into the E-152M/1 began after the
world records had been set on it. The R15B-300 engines, featuring enhanced
thrust and an all-mode nozzles, were installed on the aircraft. Extra fuel
load was added. It was housed by three detachable grotto tanks and by the
first fuselage tank. It was envisaged to install foreplanes. Due to this,
the E-152/1 fuselage's fore and rear sections were redesigned. The work had
been finished by the end of 1962, but sub-standard engines had to be
mounted. The completion of the second prototype was also delayed due to the
lack of the engines. It was assembled only in the first half of 1963,
equipped with sub-standard engines, too, and was sent to the factory flight
testing on 14 June, 1963. The E-152M/2 aircraft was equipped with R15B-300
engines and two K-80 all-aspect homing missiles, mounted on the wing tips.
The aircraft was equipped with the Smerch-A radar with the radio
interception system, SAU-1I Polyot automatic control system with flight
navigation devices, Lazur-M command link system, RSBN-2 Iskra short-range
navigation and landing system and the KSI compass system.
The R15B-300 engine ?8, delivered in November 1963 and installed on the
E-152M/1, ensured only the ground test programme, with the engine started.
The flight trials were not carried out due to the ban on operating the
engine in the air. In 1963-1964, the flight tests failed to begin because
there were no R15B-300 flight-ready engines on hand. That is why further
work on them was cancelled, and it was the E-152A aircraft that was used for
experiments.
Click to expand...

Look at the timeline, it seems that the Ye-152M's intended canards were probably to test this element planned for the Ye-155.

A picture published in that article showed a Mig E-155P (or Ye-155P) with 2 missiles (K-155 ??? ) under the wings.
I took a quick shot with my mobile phone camera (Sony K750i) at the local newsagent.
I'll try to get a better scan during the next few days. But I presume, that other German members in this forum like Deino, boxkite or Jemiba might have a copy at home...

I'm interested in getting more details of that article, maybe get a copy of the magazine. It doesn't appear to have any cockpit... Definitely seems single vertical fin too.
K-155 missile was mentioned in the article quoted above but perhaps they are rocket boosters underwing, not missiles?

In conclusion, it is necessary to note that the aircraft with the factory
designation E-155 was, at first, slated for operating as part of the
Uragan-5 intercept system. In accordance with the above resolution of the
Council of Ministers of 4 June, 1958, three E-155 interceptors powered by a
combined powerplant (turbojet engine + liquid-propellant rocket engine) were
to be submitted for factory flight trials in the second quarter of the 1960.
They were designed to intercept targets at an altitude of up to 30-35 km at
a 140-170 km range. Their maximum speed was to be 3,500-4,000 km/h. At the
first stage of the testing, the armament was to consist of K-9 missiles, and
further K-155 missiles. Besides, development of four unmanned reusable STOL
interceptors, designed to operate from unpaved airstrips, was planned and
produce them for tests in the fourth quarter of 1961. However, it did not
proceed beyond the conceptual design stage.
Click to expand...

After taking the picture with my phone camera at my local newsagent, I skimmed over the article. I remember reading not anything new or unknown about the Mig-25 development. "Ye-155" was only mentioned in the picture caption.

The caption also mentions that that shown Ye-155P has a delta wing and a single vertical fin too.

I'll try to lend out the May issue at my local library in the next 10-14 days. A better picture scan and a short summary will be posted in this topic. Of course, I won't attach the full scanned article to this topic.
B

The E-155UVP as STOL aircraft project.
Click to expand...

Can I assume that it used blown flaps? Would it still work after being subjected to the heat from flying in Mach 2.8-3 (if that was the intended maximum speed)?

Has there ever been plans or paper projects on making a MiG-25 with the weapon system of a MiG-31 (look-down, shoot-down Pulse-Doppler radar etc)? I imagine it would make a truly deterring interceptor (about as advanced as a CF-105 Arrow with ram-jets or the XF-108 Rapier), and have a better chance of taking down SR-71 Blackbirds. (JA 37 Viggens were able to detect Blackbirds flying over or near Swedish territory.)

The Ye-155A project would've added the Smerch-100 FCS, which did become the FOXHOUND's Zaslon. A lot later there was also the MiG-25PDM proposal, which would've added the MiG-29/Su-27 FCS, but they realized that the R-27 wasn't compatible with high-Mach external carriage. Dunno why that was their reason for dropping it, as they were able to make the Kh-58 work. But, I don't think they ever seriously looked at adding the MiG-31 weapon system back into a FOXBAT. I think there was talk of an upgrade adding the R-33 and perhaps elements of the Zaslon, but I can't remember the details. Syria was mentioned as a potential customer for that refit.

Wow,amazing,thank you my dear Paul.

Also from my files,

I feel the Model differs a little,am I right ?.

While the Ye-155P was still under development (what would become the prototype of the MiG-25), plans were considered for a version of the aircraft with variable geometry. 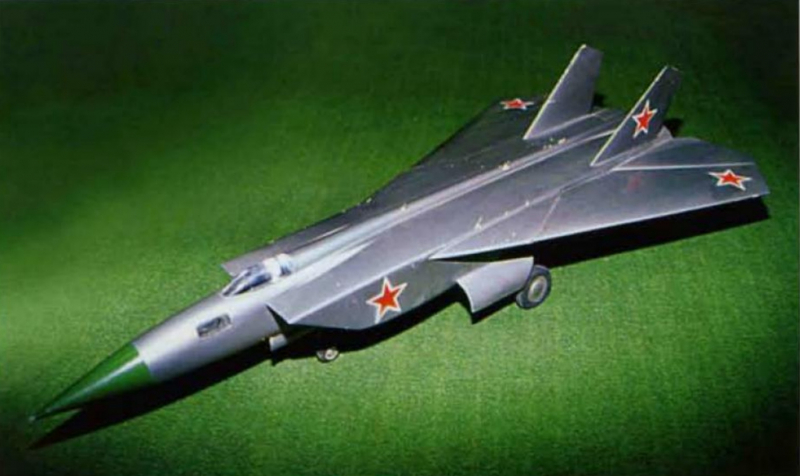 These plans were drawn on the basis of the Ye-155R - the planned recon version of the Foxbat. It would have had a total of two crew members and its wings resembled the FB-111A's greatly.

This was designated as the Ye-158, a project intended to produce an aircraft for high-speed, high-altitude PHOTINT and ELINT, with a secondary tactical bomber role. It would have been also able to carry tactical nukes. However the variable geometry wings increased its maximum takeoff weight and the wing design was of little use to the aircraft's primary mission, nor was STOL called for due to it envisioned as being too heavy for that; originally there was also the idea that it would be able to operate from short landing strips, and the navigator seat idea was deemed unnecessary and thus dropped in the MiG-25R.

Never made it to the prototype phase past the drawing board. Only models existed.

The design performance is as follows: 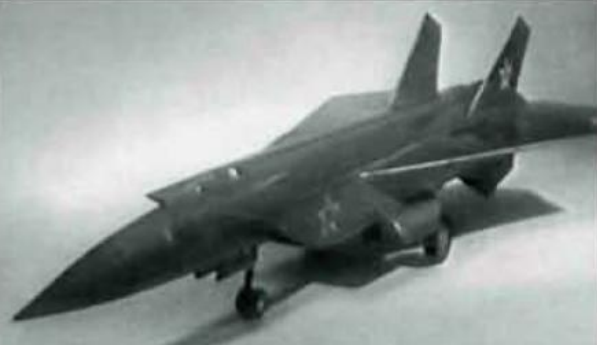 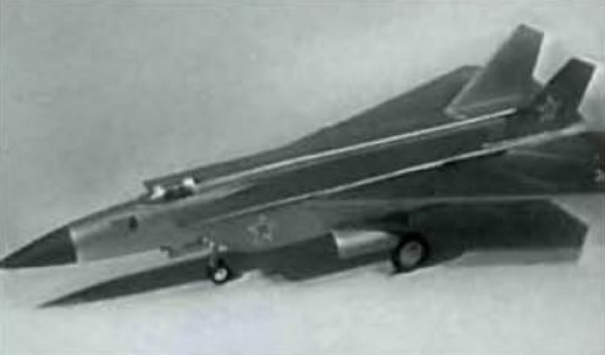 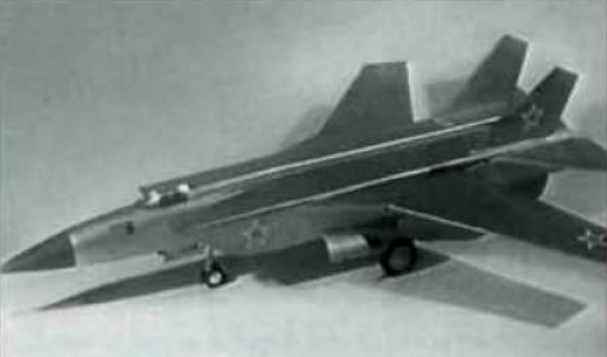 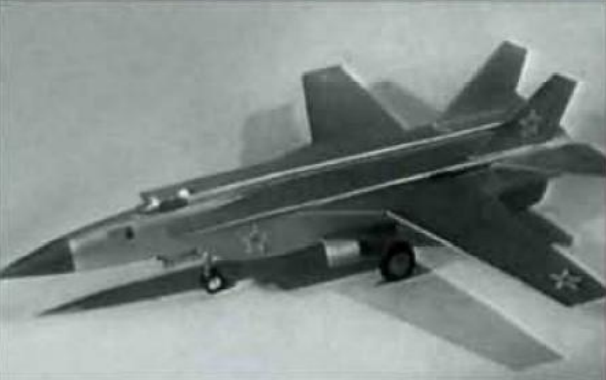 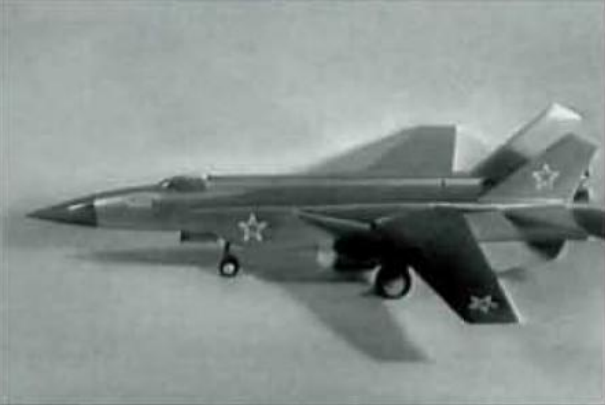 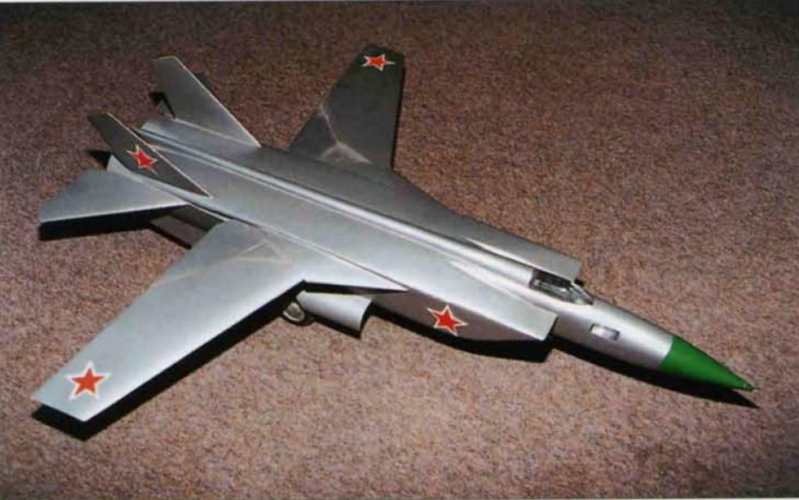 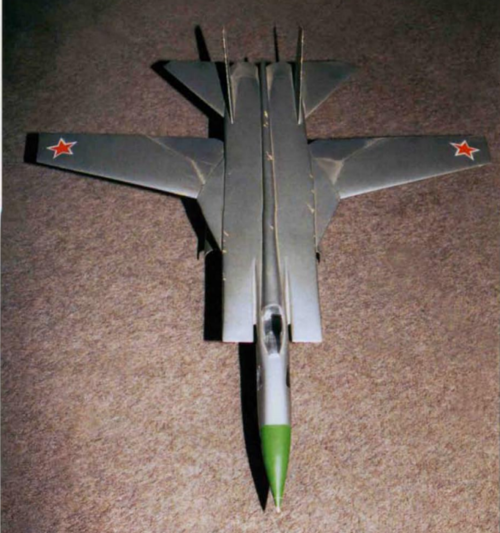