Since it seems like I'll be able to uncover more on McDonnell helicopters with access to the Greater St. Louis Air & Space Museum's archives (and a couple of the museum members which I'll be interviewing soon), it seems like a good time to combine all the different designs into a single thread.

Thanks, Mark. Can't wait for what's to come.
S

Mark, this is all fabulous!

McDonnell's convertiplanes has always been one of my pet topics, and it's nice to see some other people interested in them as well... I wish the HRH and HCH programs had not been canceled.

As for the Model 120, I've wondered for a long time why the Army demonstrator carried that strange "V-1 Jeep" designator on its frame, considering the "XV-1" designation was already allocated to McDonnell's Model 82 convertiplane, the the V- for VTOL series starting with the OV-1 Mohawk was not around until 1962. Now with this plan, we may get some explanation: probably a commercial name by McDonnell... and wishful thinking in the hope it might stick with the Army, maybe?

Thanks anyway, and I look forward to your great McDonnell discoveries!

NOTE: I attach two pictures, one of the prototype Model 120 in civilian guise and another one of the V-1 Jeep guise (from the site Aerofiles).

This really is fantastic stuff. Thanks so much. Certainly look forward to more.
A

Thanks for the post on the Model 120 and I'm looking forward to more.

Last night I was over at the museum and found a drawer full of goodies, some if which are McAir rotorcraft.

Simply amazing! Thank you so much for researching McDonnell archives and for sharing these treasures. Many unseen pics here, and I wonder what is rarer between the front view of the XV-1 (a first for me) or the color picture of the same!

Thanks Stargazer - I wish it was the McDonnell (McBoeing) Archives but for this area, the next best thing is the Greater St. Louis Air & Space Museum and it is their archives I am sorting, cataloging and uncovering this useful info. Here's hoping more to come....

NOTE: This new topic was split from the old "McDonnell rotorcraft" thread.
S

Just a thought: I wonder if the use of the "V-1" designation was not a mere reflection of the fact that the Jeep reused the rotor hub of the Model 82. Of course it would be a little far-fetched to make it a production version of the same (especially considering its experimental status) but that would pretty much explain it.

The flying qualities of the unleaded rotor compound helicopter incorporating the XV-1 principle have been ascertained through many years of theoretical study, model and full scale wind tunnel test programs, and experimental flight test of both the XV-1 convertiplane and the McDonnell Model 120, a crane, pressure jet helicopter designed around the XV-1 rotor system.
Click to expand...

A few photos of the McDonnell Model 120 (McDonnell 120) just posted by the San Diego Air & Space Museum (SDASM) on their Flickr photostream, including one photo illustrating a fire fighting rig mock-up.
https://www.flickr.com/photos/sdasmarchives/13630149953 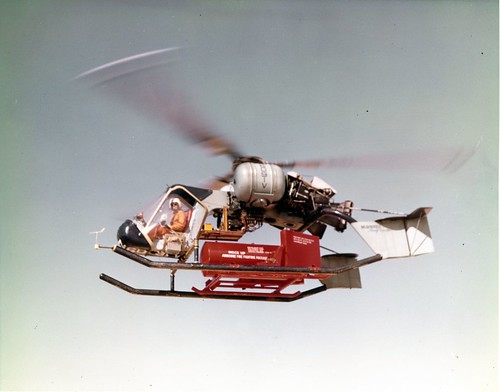 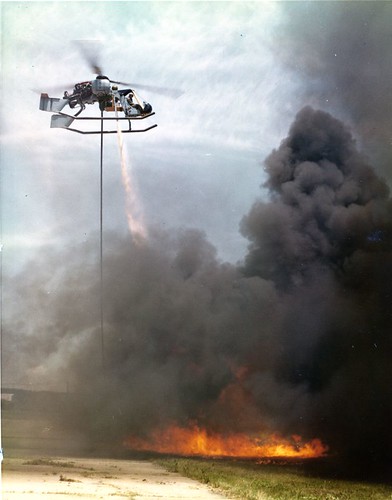 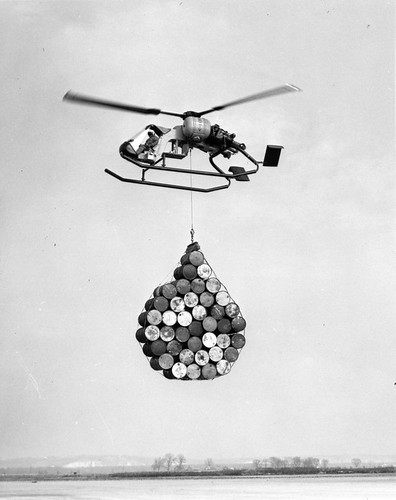 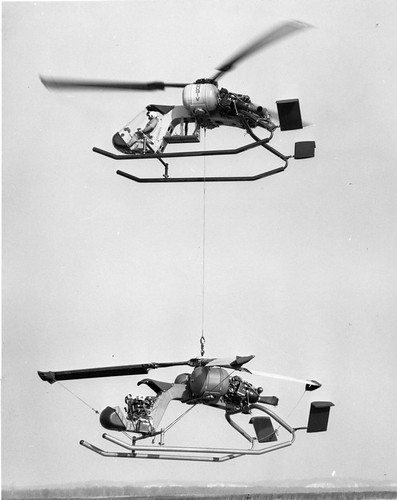 Wonderful photos. Had never seen these, nor had I seen the Model 120 in color before!
J

These new photos started me thinking about that 'V-1 Jeep' designation again, something that I perhaps should have done way back in 2009 when Mark posted the first images.
Based on information published by Aerofiles, the model 120 was tested by the US Navy from around 1957 and then transferred to the US Army in 1960.
So, if (and I mean 'if') it would have been designated by the Army it would have been in the 1956-1962 designation system and it would have been something like VZ-* or HZ-*, followed by a two letter code for McDonnell. As far as I know, the US Army did not have a two letter code for McDonnell.

The key to the solution seems to be:
1. the US Navy use (and it would be nice to see a photo of it in US Navy use);
2. the fact the US Navy never had a designation for experimental aircraft in their pre-1962 designation system, hence the Douglas D-558 Skystreak and Skyrocket, the Kellett KH-15 and the Kaman K-225 (in spite of suggestions that the HTK designation was used); and
3. the fact that the very first diagram posted by Mark on 13 August 2009 seems to be a McDonnell drawing on which the (presumably) McDonnell V-1 Jeep model designation is mentioned.

So I would suggest that the US Navy simply used the manufacturers type designation as its designation and that the US Army did not bother to change that.
Also significant in this whole thing is that we do not see a US Navy or US Army serial in the usual places and that US Navy or US Army serials listings do not include the model 120. (US Army designation have gaps, potentially allowing something we don't know to be included, but US Navy serials do not have any gaps in that period)
This makes me think that the model 120 was never procured by either the US Navy or US Army, so there was no need for a serial. The military markings were there most likely to ensure that military pilots were capable of flying (= testing) in their military capacity.

OK, so far for my two Aussie dollars worth of contribution....
S

Thanks a lot Jos for this perfectly logical explanation, which is probably our best bet until we get a definite answer from company or military documents — if ever.

Flight test film of the McDonnell Model 120 (McDonnell 120) just posted by the San Diego Air & Space Museum (SDASM) at their YouTube site. Here it is shown lifting a 2,000 lbs. weight (presumably in an air crane role), and also flying fitted with what appears to be a mock-up of a passenger-carrying pallet.

Found an interesting US Army evaluation of the McDonnell Model 120 conducted in December 1959.
It also has some specs of the prototype Model 120 and flight qualities as opposed to the 1957 proposal (but sadly no pictures). Thought this would be of relevance..

Direct link to the PDF document: (note: if you use the site search engine it won't come up..)