In October 1942 the war was shifting to the way of the Allies--the United States had come into the fight ten months earlier, Operation Barbarossa (begun in June 1941) was at this time being recognized as a complete failure (though the operation would continue on for two more years, costing 5 million German army lives, 20 million Soviet civilian lives, and 9 million Soviet army lives and more when all was said and done), and American military production was very well underway and unbeatable, and so on. The Battle of the Atlantic however was still very much underway, with action returned their, again, during the summer and autumn of 1942.

One way of defeating the U-Boot was to not sail the Atlantic much at all, and flying troops and supplies above it. As we can see in this compelling graphic from The Illustrated London News of 17 October 1942, the editors of that magazine made a case for the Mars flying boat. It was a theoretical case, as the 5,000 Mars planes depicted in the graphic never materialized--actually, it seems as though only seven were made.

But the case looked very compelling.
Click to expand...

Decided to post this here; as we didn't have a dedicated MARS thread:


WAR PRODUCTION BOARD
WASHINGTON, D. C.
MEMORANDUM​
July 28, 1942​
To: Files
Subject: Proposal for Replacing Cargo Vessels with Cargo Aircraft
A brief study made by the Navy regarding the proposal that a fleet of Martin Mars flying boats be built to replace cargo vessels has brought out the following data.
First, approximately 10,000 Mars aircraft would be required to replace 100 cargo vessels of the 10,000 ton size for carrying cargo 3000 miles, assuming that gasoline for the return trips of the Mars aircraft would be available at destination so that they would not have to carry their own gasoline supply for the round trip.
To operate these Mars aircraft 80,000 trained men would be needed, whereas 100 cargo vessels would require a total of only about 4,000 men of whom 1,000 would have to have special training.
The Wright 3350 Cyclone engines to operate these Mars aircraft would total 80,000 units, assuming 100% spares on the basis of 2750 man hours per engine, and figuring that the entire quantity would have to be produced in two years in order to see service in this war, a total of about 35,000 men would be required for the production of the engines alone.
Since material shortages are critical, it is obvious that the construction of 500 Mars flying boats per month would have a very serious effect on presently planned programs for other types of aircraft.
One other item to note is that 100 cargo vessels would ordinarily keep 100,000 to 150,000 fighting men supplied with equipment, food, and other necessities. To do this with Mars flying boats would mean that 80,000 very well trained personnel would be required to operate the flying boats to keep 100,000 to 150,000 men supplied for fighting Since trained pilots, navigators, radio operators, etc. are scarce, this in turn would reduce the number of skilled personnel available to operate fighting aircraft.
It was the opinion of the Navy personnel with whom I discussed this subject that the man power and materials could be used more effectively by building and operating fighting aircraft, probably of the heavy bomber type, to destroy the opposition's submarine building facilities and thereby eventually reduce the cargo vessel sinkings to a point where they would again become a reliable method of transportation. The Navy indicated that they were not too optimistic over the possibilities of combating the submarine menace with aircraft as this method has been rather unsuccessful to date.

Thought we had a dedicated thread now on the Mars or at least Martin military flying boats, but no joy.
View: https://www.youtube.com/watch?v=YCKLuBi9C1E

With regards as to its would be civilian sibling: 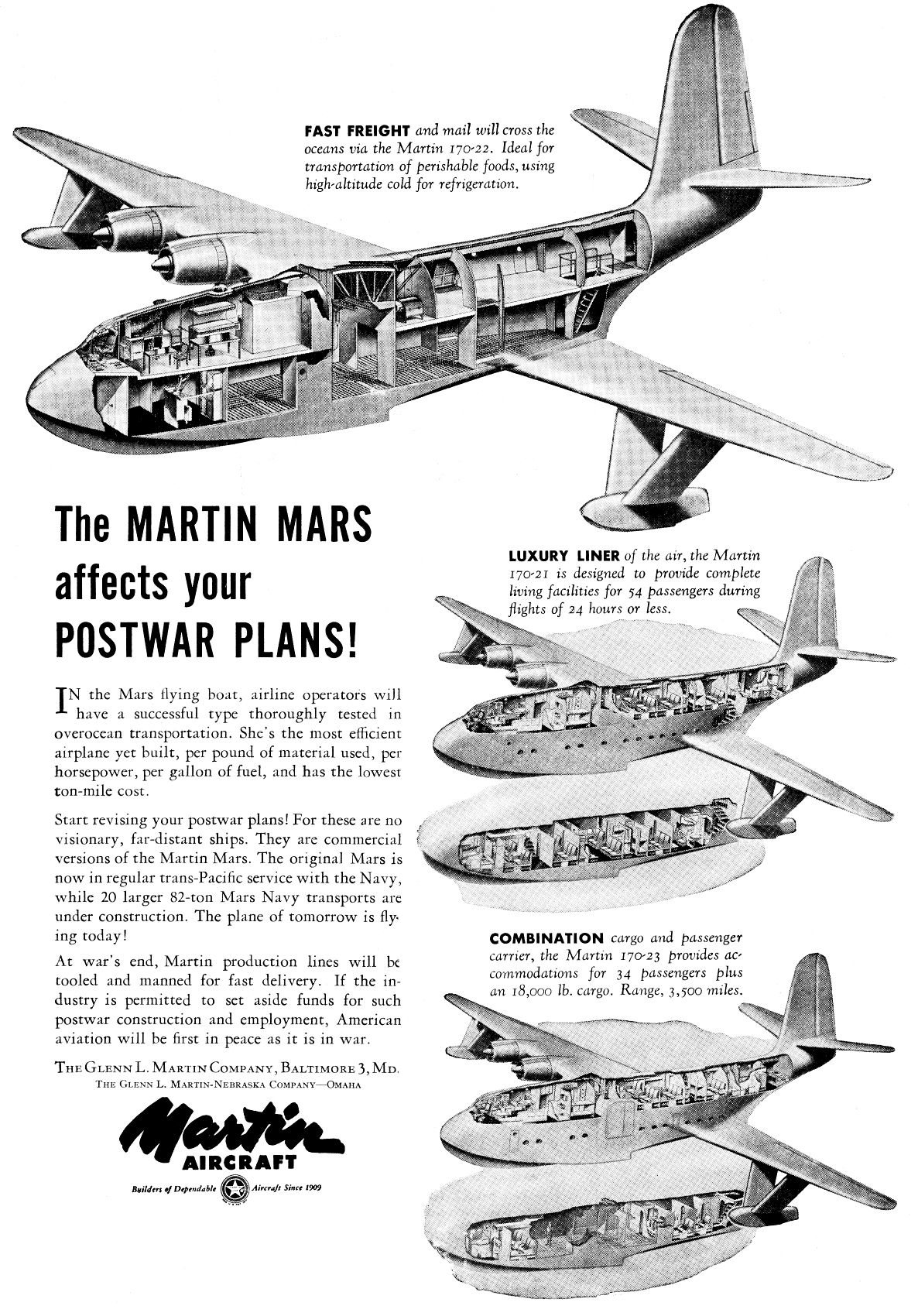 As beautiful as the big UK designs, and as superseded by all those lonnnng big-bomber runways...
R

The most beautiful pieces of art-deco.

Does anyone sell a sub-scale model of Martin Mars?
K

"Sub-scale" is anything smaller than 100 percent, full-sized.
Only the USN Museum at Pennsacola, Florida can afford to house a full-sized Martin Mars.

I've been to the museum in McMinnville to see the Hughes Hercules, it's nearly twice the size of a Mars so I don't think you need too big of a museum for a Mars
Last edited: Oct 10, 2021
F

Pretty sure Anigrand does not make one.
K

Pretty sure Anigrand does not make one.
Click to expand...

Yep! you're right --- I saw a pic of the resin and it looked like Anigrand's work style, it's actually a CMR kit.