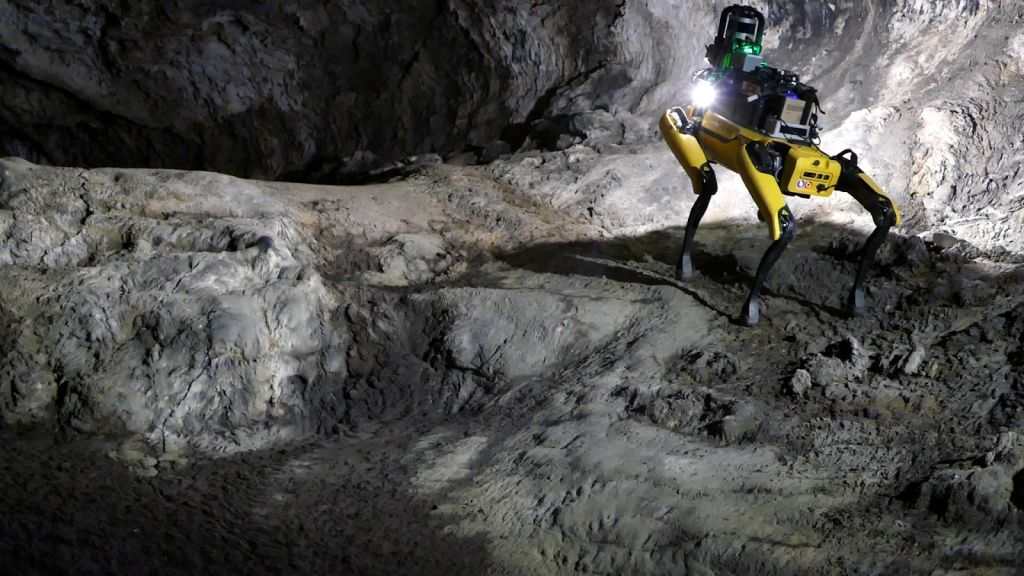 Scientists are equipping four-legged, animal-mimicking robots with artificial intelligence (AI) and an array of sensing equipment to help the bots autonomously navigate treacherous terrain and subsurface caves on the Red Planet.

In a presentation on Dec. 14 at the annual meeting of the American Geophysical Union (AGU), held online this year, researchers with NASA/JPL-Caltech introduced their "Mars Dogs," which can maneuver in ways the iconic wheeled rovers such as Spirit, Opportunity, Curiosity and the recently launched Perseverance never could. The new robots' agility and resilience are coupled with sensors that allow them to avoid obstacles, choose between multiple paths and build virtual maps of buried tunnels and caverns for operators at home base, scientists said at AGU.

Traditional Mars rovers are limited mostly to flat surfaces, but many scientifically interesting Martian regions are only reachable by crossing very rough terrain or descending below ground. Walking robot "dogs" are well-suited for such challenges — even if they fall down, they can get back up again.


"Toppling does not mean mission failure," the scientists said during the presentation. "Using recovery algorithms, the robot can self-right from a multitude of falls."

A Mars Dog would also be roughly 12 times lighter than current rovers and would be capable of traveling much faster, reaching normal walking speeds of 3 mph (5 km/h) during terrestrial tests. To put that into perspective, the Curiosity rover rolls along the Martian surface at about 0.09 mph (0.14 km/h), the researchers reported.
Click to expand...

The autonomous Mars canine, dubbed "Au-Spot," is a modified version of "Spot," a four-legged mechanical explorer created by the robotics company Boston Dynamics. More than 60 scientists and engineers on the team of Collaborative SubTerranean Autonomous Resilient Robots, or CoSTAR, equipped Au-Spot with networked sensors and software to help it safely and autonomously scan, navigate and map its environment.


Au-Spot processes input from Lidar (remote sensing using laser pulses), visual, thermal and motion sensors to create 3D maps. The Mars Dog also uses AI to learn which structures to avoid, and to identify objects that may be of scientific interest, while a communications module allows the robot to transfer data to the surface while it's exploring underground.
Click to expand...

They ought to call it Woola, I think
A

Major issue will be powered autonomy. Nuclear-powered MarsDogs anyone?