PARIS, Oct. 23, 2012 – With two Littoral Combat Ships (LCS) currently in the U.S. Navy fleet, two more in production and two others under contract, Lockheed Martin [NYSE: LMT] is leveraging experience gained through the LCS program to offer a Multi-Mission Combatant for navies worldwide.

The Multi-Mission Combatant is an agile, modular vessel capable of speeds in excess of 40 knots. It provides the power of a larger platform with a smaller crew, similar to the core 40 sailors the U.S. Navy uses on its version of the ship. As a next generation surface combat warship for international navies, the ships can deliver maximum firepower to meet current and future operational requirements with lengths ranging from 85 to 118 meters and displacement ranging from 1,800 to 3,500 tons.

“The resurgence of piracy, and threats to open trade and commerce, along with the need for nations to protect sovereign shorelines, requires a ship class capable of multitasking without compromising mission effectiveness in complex security environments,” said Joe North, vice president of Littoral Ship Systems at Lockheed Martin’s Mission Systems & Sensors business. “Our proven multi-mission design offers a formidable combatant with less cost, less risk and lower manning requirements, resulting in a ship that can be efficiently and affordably adapted for a variety of combat and humanitarian missions.”

The ship’s design is intended to be adapted for a variety of missions, including anti-air, mine countermeasures, anti-surface, anti-submarine and electronic warfare, with inherent capability for supporting counterterrorism activities, anti-piracy missions, special operations missions, maritime interdiction and humanitarian relief operations.

By leveraging the U.S. Navy’s latest technologies, international navies can benefit from the ship’s interoperable capabilities with systems like the common radio room and platforms such as Lockheed Martin’s MH-60R helicopters and Remote Multi-Mission Vehicles.

The Lockheed Martin-led industry team is building the Freedom-variants for the U.S. Navy on schedule and on budget. USS Freedom (LCS 1), the U.S. Navy’s first LCS, will deploy to Singapore in 2013. USS Fort Worth (LCS 3) was commissioned in September and is now homeported in San Diego. The fifth and seventh ships – Milwaukee (LCS 5) and Detroit (LCS 7) – are under construction. Earlier this year, the Navy funded Little Rock (LCS 9) and Sioux City (LCS 11). Follow-on options call for six more ships by 2015.

Headquartered in Bethesda, Md., Lockheed Martin is a global security and aerospace company that employs about 120,000 people worldwide and is principally engaged in the research, design, development, manufacture, integration and sustainment of advanced technology systems, products and services. The corporation's net sales for 2011 were $46.5 billion.

The Multi-Mission Combatant provides fleet modernization that addresses emerging regional threats well into the 21st century. It enhances the ability to perform critical missions, protecting energy resources, providing anti-piracy and counter insurgency operations maritime support to allied nations. The ship and its combat system are designed to provide multi-warfare capability and operate in shallow water or deep-ocean in all weather conditions.

Based on the Lockheed Martin-led team’s design for the U.S. Navy’s Littoral Combat Ship, the Multi-Mission Combatant is the next generation surface combatant for U.S. Allies. It delivers maximum firepower to meet the current and future operational requirements. At 115 meters in length and approximately 3,300-ton displacement, the ship provides simultaneous Anti-Air, Anti-Surface, Anti-Submarine, Electronic Warfare and Special Operations support capabilities.

The Multi-Mission Combatant is a high speed, highly maneuverable combatant capable of executing missions both in open ocean and near coastlines in all sea state conditions. The ship design uses the latest U.S. Navy technologies, allowing interoperability with U.S. and allied naval forces to participate on joint and coalition operations.

The Multi-Mission Combatant is available in multiple configurations and is adaptable to meet the needs of naval forces around the globe. The international design features the proven Aegis combat system with the SPY-1F (V) radar and the MK 41 Vertical Launching System.

These make the LCS look even worse than it already is. The U.S. Navy should just buy a bunch of different variants of this and call it even. Seems the same way with Foreign customer versions of the F-15/16 that are more advanced than our versions. Sure we may have 185 F-22s and upcoming F-35s but we could spend our money a lot more wisely by buying stuff like this and more advanced versions of legacy fighters.

Lockheed Martin is being awarded a contract totaling $450 million to begin the detailed design and planning for construction of four Multi-Mission Surface Combatants (MMSC) that will be built at Fincantieri Marinette Marine shipyard in Marinette, Wisconsin.

The Kingdom of Saudi Arabia (KSA) will acquire four Multi-Mission Surface Combatants as part of a larger agreement between the United States and KSA to enhance global security and stimulate economic progress in the two regions.

"We are pleased the Kingdom of Saudi Arabia has selected the Multi-Mission Surface Combatant to support its Royal Saudi Naval Forces fleet," said Joe DePietro, vice president, Lockheed Martin Small Combatants and Ship Systems. "The MMSC provides the Royal Saudi Naval Forces a lethal and highly maneuverable multi-mission surface combatant, which features the flexibility of the Freedom-variant Littoral Combat Ship steel mono-hull with expanded capabilities that include an integrated Mk41 Vertical Launch System, an increased range of 5,000 nautical miles and speeds in excess of 30 knots, making it capable of littoral and open ocean operation, and able to confront modern maritime and economic security threats."

In March, Lockheed Martin was awarded $481 million for long lead material for MMSC. The contract award of the MMSC is a significant milestone in the relationship between Lockheed Martin and the Kingdom of Saudi Arabia.
Click to expand...

The MMSC probably makes sense for Greece. The don't need the range/endurance of a larger, more traditional frigate, and a little extra speed can't hurt. Possibly these ships could act as flotilla leaders for their FACs.

It appears that the intent would be for three of the MMSC hulls to be built in Greece. And that's probably the basis for the FFG(X) cooperation -- laying the groundwork for possible future FFGs to be built in Greece as well. That sort of ship would bring something resembling an area air defense capability, long lacking in the Greek Navy. 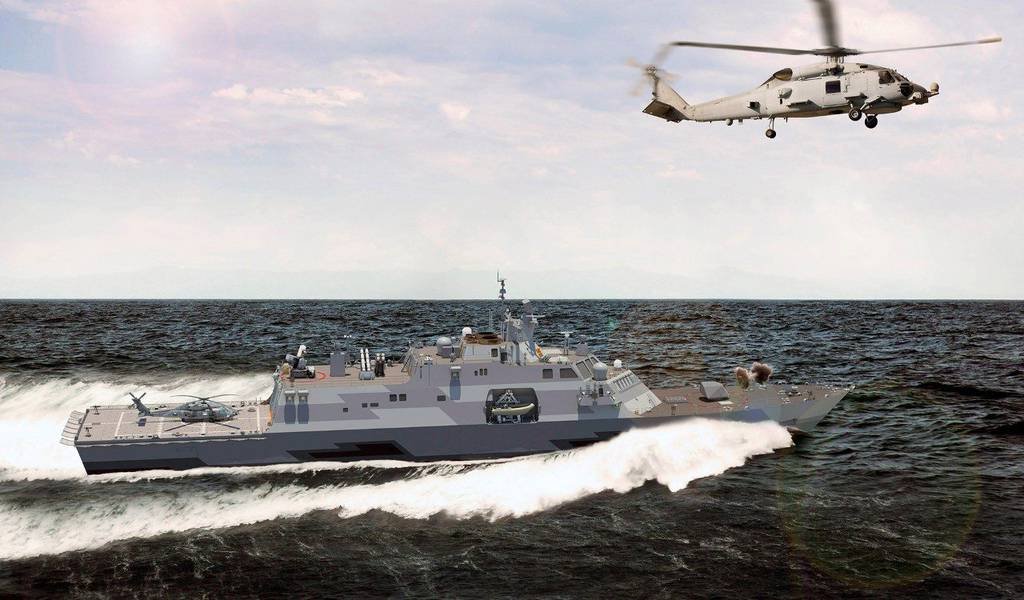 US pitches Greece on a frigate co-production deal

American shipbuilder Onex, based in Greece, could help construct new frigates for the Hellenic Navy.

Interesting that the plan to buy 2 FDIs from Naval Group falling apart might lead to Greece buying 4 MMSCs from LockMart. One to keep an eye on.
J

Which version of MMSC are Greece interested in. Unlike the US navy I can see the point of the high speed for the Greek navy. However, IMO the light and medium versions have totally inadequate air defences for the narrow seas around the Greek coast and islands.

JohnR said:
What are FDI?

Which version of MMSC are Greece interested in. Unlike the US navy I can see the point of the high speed for the Greek navy. However, IMO the light and medium versions have totally inadequate air defences for the narrow seas around the Greek coast and islands.
Click to expand...

JohnR said:
Which version of MMSC are Greece interested in. Unlike the US navy I can see the point of the high speed for the Greek navy. However, IMO the light and medium versions have totally inadequate air defences for the narrow seas around the Greek coast and islands.
Click to expand...

Reporting seems to be the same version that the Saudis are getting, so RAM and 32 ESSM, controlled via TRS-4D and Ceros directors. Not area air defense but not shabby.

Presumably the long-term plan would be to add FFG(X) for (limited) area AAW cover.
J

I hadn't noticed the VLS on the smaller version of the image, so I agree it has better AA defences than I thought. Are the two white panels on the largest version, aft of the AShM's are the covers for additional VLS emplacement, presumably for land attack missiles or VL Asroc? She would have plenty of AA missiles so if I've counted right it has 6 vls groups of 8 so up to 192 ESSM. I would sooner the RN had adopted that rather than the inspipid design that has been adopted for the Type 31. 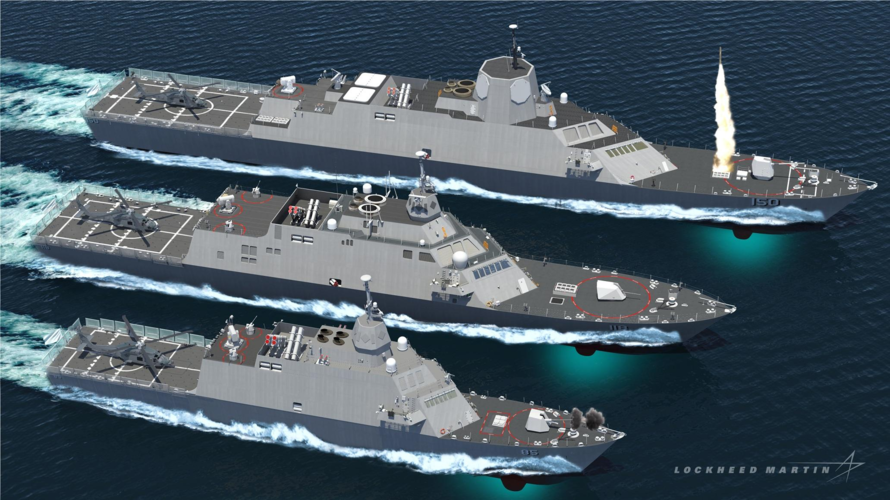 I think the white sections on the largest ship are actually LCS mission module units. There are additional VLS alongside the RAM launcher and Hangar, however, for a total of 48 cells.

But I think the Saudi (and possible Greek) version is actually closer to the middle configuration, with just 8 VLS cells (32 ESSM). Edit: Rumor mill also has it that the Saudi ships get a 76mm gun instead of the 57mm, which would make sense for the Greeks as well. I'd call this more of a corvette than a full-fledged frigate by modern standards.