In the 1964 HYLEAP brief, available from Scott here:
http://www.up-ship.com/drawndoc/drawndocspaceother.htm#spacedoc30, the HYLEAP is compared to two other then-current projects.

However I have not heard anything on them. Google wasn't much help either. So I find myself stumped.

The first projects is the "Boeing HL-10". This seems to be similar to the HL-20 NASA worked on later in the 90's. However, as we all know, Boeing didn't build the HL-10, Northrop did. So the mystery remains

The other project is a capsule from Lockheed called BALLOS. This appears to sometype enlarged Apollo-type CM on the order of Big Gemini. In fact it looks very similar to the Big G artwork here. I'm also pretty sure that it was BALLOS I've seen in SPACE STATIONS by Roger Launius, though it's not mentioned as such.

It was Northrop that built the HL-10.

Steve, that's exactly why he's curious about this report data

I stand corrected. Something I missed like my Grandmother's wedding.

BALLOS was the Lockheed CL-635 "Ballistic Re-entry Type Logistics Spacecraft," from which someone, somehow, derived "BALLOS." Dates from 1964, for transporting 12 (emergency 14) suited astronauts. Launched by either Titan IIIc or Saturn Ib.

There's an article on it with so-so drawings in the V2N2 issue of "Quest" magazine, and a follow-up in V2N3 with the drawings completely redone by Rick Pavek.

I forgot to mention the North American MODAP. This has the appearance of an Apollo CM (minus the Service Module) with a simple retro pack. Simple enough.

As for BALLOS, could it be related to the "Diana" capsule? In the Launius book, mention is made of a proposed, enlarged 6-man Apollo named "Diana", meant to service the MORL. The picture shown looks alot like BALLOS.

Something about the "Boeing" HL-10 reminds me of the LUNEX lifting body.

XP67_Moonbat, is the Lanius book to which you refer in your previous post be Space Stations: Base Camps To The Stars by Roger D Lanius, Smithsonian 2003?

I 'm searching some image of the Orbital version of the HL-10 (Scott recently in his blog published a b/w cutout).

archipeppe said:
I 'm searching some image of the Orbital version of the HL-10
Click to expand...

There were a *lot* of orbital versions of the HL-10, by every American company and of every size from small to bigger than the Shuttle.
C

Arrow down to figure 4...In the corner is a poor-quality illustration of the BALLOS/Diana capsule. In fact I say it is Diana because that's almost the same drawing that's in Launius's space stations book. 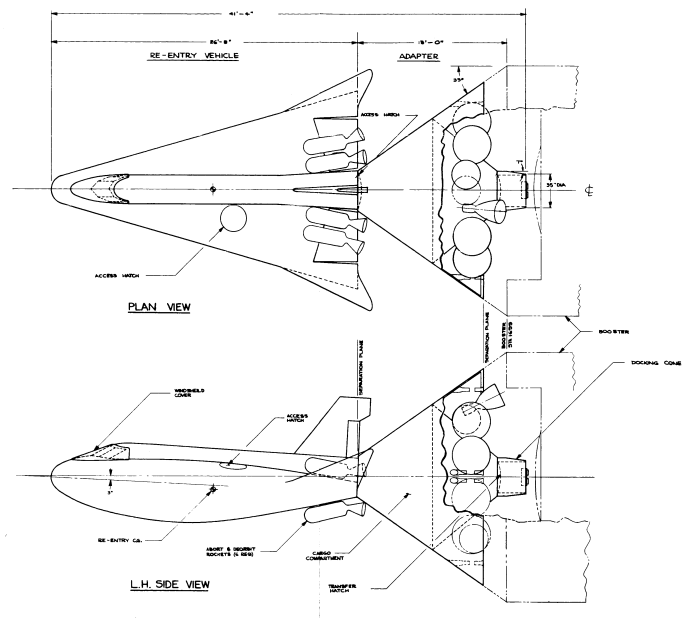