I have always liked the Loening Amphibian and Grumman Duck amphibious biplanes with their integrated float/fuselage design as well as single-float seaplanes like the Mitsubishi "Pete" and the Vought Kingfisher.

With those in mind, I have been kicking around some ideas for a light, two-seat amphibious homebuilt in the European microlight category and I am very attracted to the single-float layout, which seems to offer better rough-water performance and perhaps a little less drag. Admittedly, the wing floats make it harder to come alongside a dock, but that is true with hull-type flying boats as well.

Here one example I have been able to find, DH.60G Gipsy Moth G-AADV on a Short Bros amphibious central float and wingtip floats. 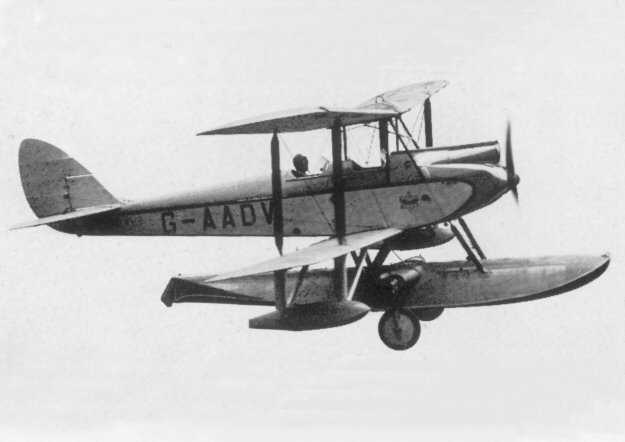 Does anyone know of any more examples of relatively light, single-float amphibians or seaplanes that might help inform this concept? Any particular pros and cons come to mind with this configuration?

About the pros and cons of central floats compared to twin floats, maybe the Arado Ar 196 can
be used as a good example (there aren't too many, I think), as two of the four prototypes were
fitted with central floats. Will look, what I can find ..
S

The Curtiss SC-1 Seahawk seems to pretty much correspond to the configuration you're after.

Stargazer2006 said:
The Curtiss SC-1 Seahawk seems to pretty much correspond to the configuration you're after.
Click to expand...

Still the Seahawk is a great example of what you can do with careful design--even with the floats, it was almost as fast as the FM-2 Wildcat with the same engine and at a slightly higher gross weight.

I'd go with a twin engined design (of some sort):

One of the appeals of float planes is that you can conduct emergency landings on bodies of water (eg. in case of changes to weather). In Canada we have hundreds of thousands of lakes - but you don't want to suffer an engine failure and end up somewhere in the trees between them.
F

Here's the attractive Edo XOSE-1 of 1946. It was going to be the USN's next catapult-launched scout plane but for the end of the war and the advent of the helicopter.

About the Arado Ar 196 I had a look into the Luftfahrt International N° 4, which featured a very detailed article
about the design and construction, but unfortuantely without performance data. In Novarra "Die deutsche Luftrüstung"
are no comparable data for both versions, too, but at least it is stated, that the Ar 196 V 5 (prototype of the B series)
with single central float was somewhat lighter and faster. Nevertheless the twin float type was favoured. My guess is, that
it was better compatible with the then current ship based catapults and maybe less prone to damage and mishap due to
lost auxiliary floats, but as said, that are just my guesses.

That's a new one for me, thanks!
S

As the single-float version of the Arado Ar 196 was mentioned earlier in this thread, here is a clip of one during trials. Landing goes well, but the takeoff gets, ahem, interesting. You'll see what I mean.

From "Die deutschen Militärflugzeuge 1919 - 1934" by Helmut Stützer,
a fighter, but nevertheless still a light aircraft, I think, at least according
to our standards (1627 kg empty weight: Arado SSD I

... and a photo from http://vintageaviation.michikusa.jp/germany_arado-ssd1_1929.jpg

Thanks, the way the bottom wing is actually below the fuselage with the space between used for the radiator is an interesting design feature. Honestly, though, I am really looking for examples much lighter than these, say under 1000 kg gross weight.
Share:
Facebook Twitter Reddit Pinterest Tumblr WhatsApp Email Share Link