Latest news on the possible fate of the CG Ticonderoga class

"Adm. Greenert has been in a cruiser tug-of-war with House Seapower chairman Randy Forbes for years. The Navy has 22 aging Ticonderoga-class guided missile cruisers, whose Aegis radar and targeting system is more powerful than the version on the newer but smaller Arleigh Burke destroyers."

I love the chairman trying to characterize similarly to the way the A-10 fight has: The mean old Navy just doesn't like these fine ships and wants to ditch them because they're mean.


[/size]“If they were serious about this they would put the funding in the FYDP. They did not do that,” Forbes growled at the subcommittee mark-up today.
Click to expand...

[/size]Ok let's play the game your way Mr. Forbes. If you were serious about maintaining the fleet's cruiser force you would put in the funding needed to begin buying new cruisers to replace them, which we were supposed to be buying in 2011, earlier than 2030. You did not do that.

Is the capability gap between the latest ABs and the Trigs still so great?

Would love to see a cruiser version of the Zummmmmwalt

Its not a capability gap of how far the radars can see or how well the computers compute, if that's what you are asking. The Cruiser which rides "shotgun" on the carrier in a CSG is the nexus of the group's air (and missile) defense screen, it's the flagship where defending the fleet against aerial threats is concerned and the coordination of the battle flows through it's CIC. To perform that role effectively requires additional equipment and personnel than a Destroyer has for "just" fighting its corner of the battle. That's the big problem which the Burke class can't cover, at least not without an even more extensive redesign than the Flight III.

Yeah, I was puzzled by the mention of "more powerful" radars on the CGs. That was kinda sorta true for SPY-1B compared to early SPY-1D, but it hasn't been accurate for new radars for a decade or more.

The missing capability is squadron staff and AW commander capacity. You'd have to redo the DDG's CIC spaces for starters, and figure out where to shoehorn the staff accomodations on ships that are already notoriously "tight" and short on free arrangeable volume.

Randy Forbes: Navy Has ‘No Credibility’ On Cruisers

This may get intense...

my little offtop
I love old style missile magazines, they have something attractive
clip without sound i cant that, my choise of soundtrack

Used to be on a forum where one of the members was a former Captain / XO (don't recall which at the moment) of one of the Leahy "double-enders". Said their SM-2ER (RIM-67), with the NTU (New Threat Upgrade) had some abilities even Aegis at the time didn't. Of course that was pre SM-6. . .

"New Threat Upgrade allowed the full use of newer Standard missiles (SM-2ER BlkII w/Mk80 booster) and improved the interoperability of the radar, computer, tracking and engagement systems aboard the ships.[citation needed] The system allows the ships to which it was fitted to time share illumination radars for multiple missile interceptions in a manner similar but far superior to the Aegis Combat System.[citation needed] NTU Combat System also allowed full on Engagement of other ships inbound raids while they laid in silent undetected wait to decimate the inbound raid. Many sources affirm and verify that NTU ships were easily combat superior in most respects to Aegis ships of the same era, particularly in the area of tracking and engagement through high jamming environments at nearly double the range of then current Aegis technology.[citation needed] They were inferior to modern Aegis cruisers in that their berthing, messing, and habitability systems were antiquated and needed constant repair.[citation needed] " 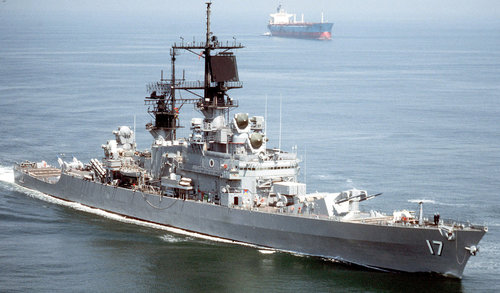 I wonder what shape she’s in on the inside? Didn’t even reach 30 years… 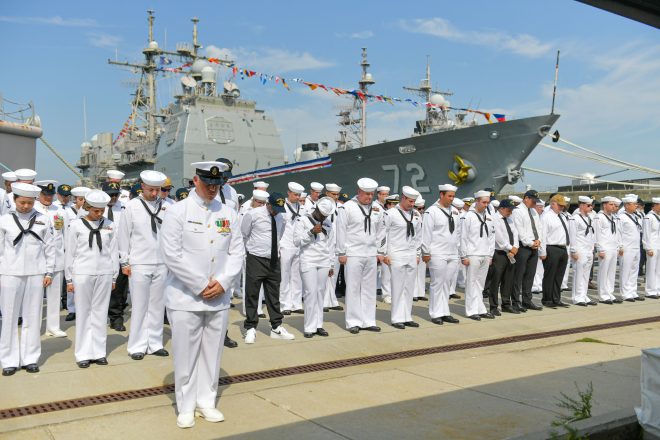 Nearly 29 years ago, USS Vella Gulf (CG-72) sat in the waters around Norfolk, Va., waiting to be commissioned into the Navy. The ship sat in the same waters Thursday, this time for its decommissioning ceremony as its current crew and plankowners said goodbye to the ship. When Vella Gulf...