who can ID those twin boom airtcraft ?,one was glider and the other
was powered aircraft .

The glider is the Kokusai Ku-7 Manazuru (Crane),

and the powered version is the Kokusai Ki-105 Ohtori (Phoenix),

Thank you very much Robunos.

What was the towing aircraft used for the Ku-7?

robunos said:
What was the towing aircraft used for the Ku-7?

robunos said:
What was the towing aircraft used for the Ku-7?

Hi! Ku-7 larger image and another Ki-105 three side view. 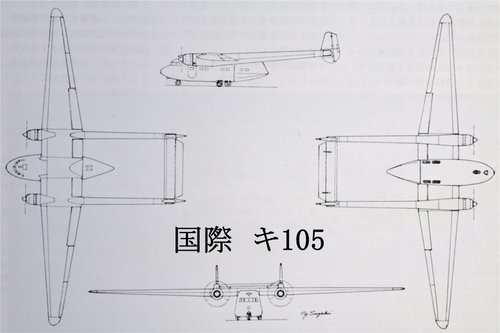 Ku-7 is a fork type tail military glider of the Imperial Japanese Army, which was prototyped during World War II. Design and manufacturing are by Japan International Aviation Industry. The nickname is "Manazuru". The Codename of the Allies is "Gander" (Gander, "Male Goose" and the meaning of "goofy").

The Ku-7 Glider was a enlarged type of Maeda Ku-1 Glider, which was ordered by the IJA in February 1942 as a "wooden glider capable of transporting Type 98 light tanks" to the Japan International Aviation Industry. Japan International Aviation Industry Co., Ltd. started the basic design in the same month with Kozo Masuura as the design manager, and in January 1943, the Ku-7I for strength testing was completed. Then, it began the production of Ku-7II as a practical type in response to the results of the strength test. The prototype of the Ku-7II was completed in July 1944, and it first flew on August 15, the same year.

The main fuselage and flight control surface of the Ku -7II was made of light alloy and otherwise made of wood. The fork type shape of the Ku-7II was able to secure a large square cargo compartment, which could be carried 32 - 40 personnel, 7,000 kg of cargo, or even light tanks. At the rear of the fuselage of the Ku-7II, it was equipped with a hydraulic upward opening door and a lower opening lifting plate, which became the standard in modern military transport aircraft. Ku-7II required a powerful towing aircraft, and it was scheduled to be filled with type-100 heavy bombers and type-4 heavy bombers, but these aircraft had few deployments. Since the development of the powered Ki-105 based on ku-7Ⅱ started, the development of Ku-7Ⅱ discontinued, only one Ku-7I and one Ku-7II was completed. It should be noted that, Ku-7II production was continued as Ki 105.

The Ki-105 was a prototype transport aircraft of the Imperial Japanese Army during World War II, and was developed and manufactured by Japan International Aviation Industry. The name “Ootori”, which is often introduced as the name of this aircraft, is an in-house name in Japan International Aviation Industry, and there are differences in notation depending on the literature. The code name by the US military is Buzzard.

From 1943 (Showa 18), the Japan international aviation industry has been developing the large-sized transport glider Ku-7II, but the Japanese Imperial Army which examined Ku 7-II completed in August 1944 (Showa 19) Instructed Japan International Aviation Industry to make this aircraft as transport aircraft with an engine. In a situation where the US Army's thorough trade destruction operations had taken its right to control seas in Southeast Asia, the Imperial Japanese Army replaced the oil tanker ship from the south to mainland Japan using segmented transportation with hundreds of transport aircraft. Also, they planned an extraordinary emergency measure to transport fuel as much as 20 percent.

At that time, as a request to the transport aircraft was raised as follows.

The transport aircraft named Prototype Name Ki-105 was modified in the second prototype of Ku 7-II, and the prototype was completed in November 1944. The prototype had two engines, so the front of the fork-type fuselage was slightly extended. The central fuselage was made of light alloy and the other parts were wooden. As the fuel tank, a main tank was provided in the fork type fuselage, and an auxiliary tank was provided at the leading edge of the central wing. The engine was initially equipped with Ha 13 (450hp), but was replaced with Ha 26-II or Ha 102 due to insufficient output.

In response to the army's mass production instructions, the mass production system was drawn mobilizing all the woodworking furniture factories around Kyoto (the elementary school auditorium was also used as a assembly place) by Japan International Aviation Industry, but production did not progress due to the intensification of air raids, shortage of supplies, and the decline in smelting by engineers and student mobilization, and only nine aircraft were completed by the end of the war due to the bombing of the production plant. The completed aircraft was used for training at Yakkaichi Airfield in Shiga Prefecture, but was destroyed by air raids (10 completed aircraft, there is also a opinion that the flight inspection ends 7 aircraft) remaining aircraft were also incinerated at the end of the war. In addition to the normal transport aircraft type (Ki -105 Ko), fuel transport type (Ki-105 Otsu) was also planned, but ended without completion by the end of the war.

If the development was carried out several years earlier and used as a strategic weapon, it would have been evaluated as one of the aircraft that could have a significant impact on the war situation , while it consumed most of the fuel from Southeast Asia, which was about 2,500 km away, to reach the mainland of Japan, and fuel was needed on the way from Japan to Southeast Asia. In addition, after the loss of air control, there is no guarantee that the slow and dull aircraft will be able to escape from allied fighters aircraft full of fuel, and there are negative opinions such as "in a desperate situation ... it does not seem almost insane". 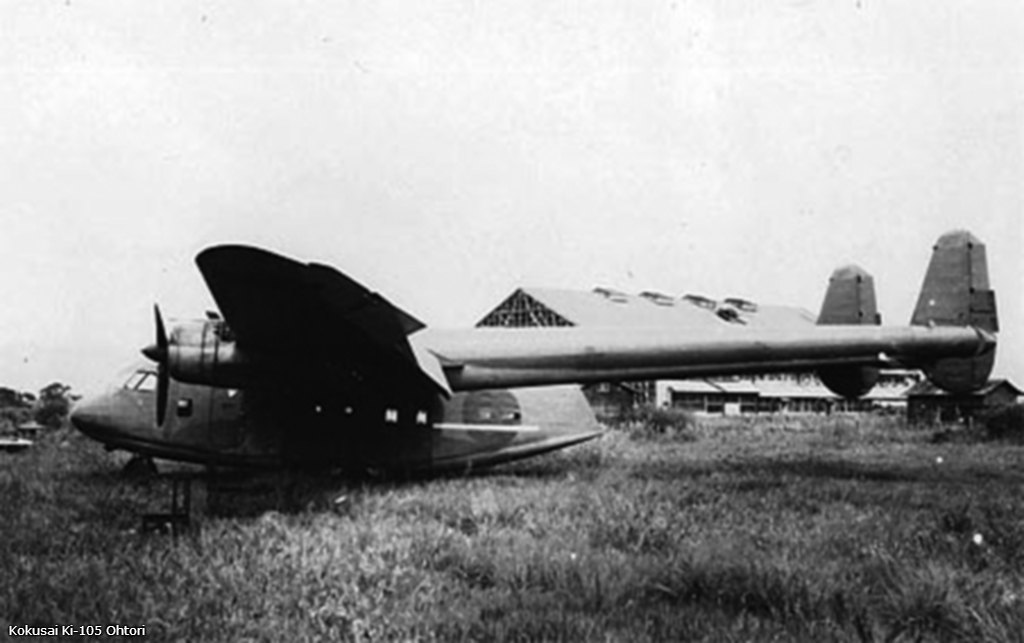 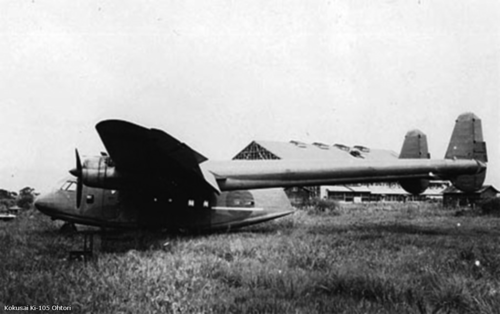 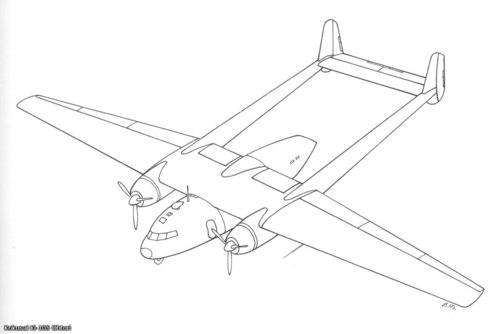 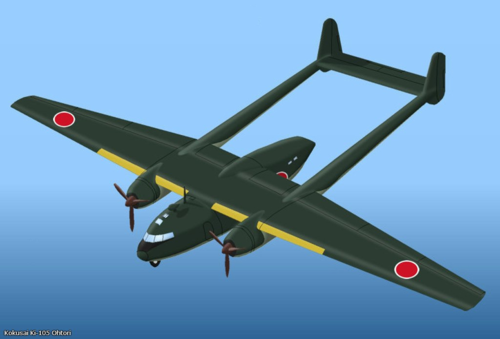 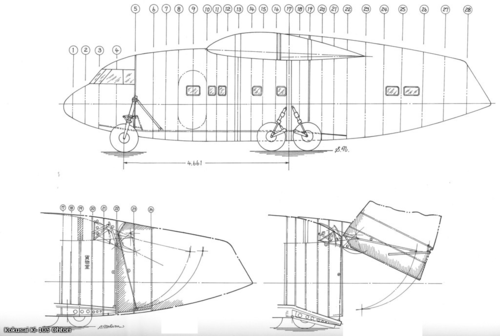 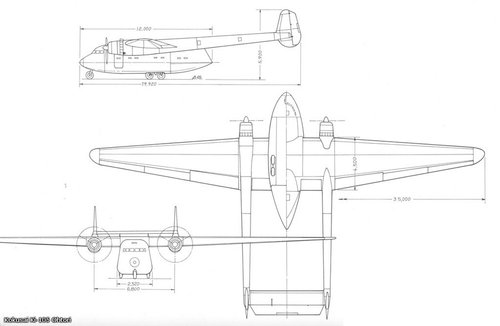 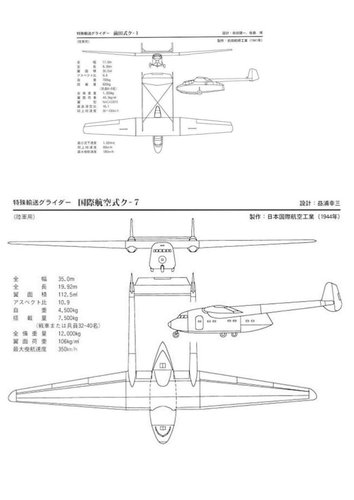 Please tell me from which edition of these drawings: 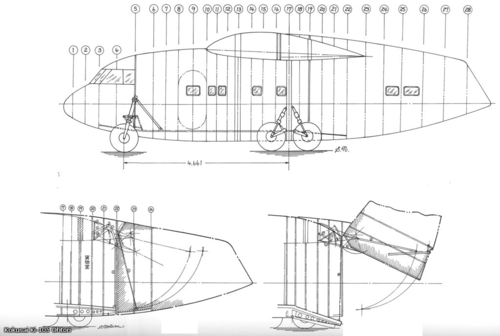 Are there any more drawings for this glider plane? I collect information on it for the release of a scale model. Brand - Micromir.

Original document about the Ki-105, with some interesting drawings: