Thanks Borovik! I've read descriptions of this project but the drawings are quite different from what I had imagined

So thanks for image !

My dream is see Ju-186 and Ju-286 designed like design concept like in books of Putnam ! ;D

From the same source,


here is the all data.

In Novarra "Die deutsche Luftrüstung 1933 - 1945" the Ju 186 is mentioned as a planned test aircraft
for high altitude equipment only, not as a service aircraft. I know, that Novarra sin't still regarded as
a very reliable source, but as this project was started quite late and then still intended to use a fixed
landing gear, this interpretation doesn't seem to be totally unplausible to me.


if you have a time,please can you make a 3-view to Ju-186,and if possible a sketch drawing
to Ju-286 with six engines.

Hi Hesham and anybody else interested. I don't have the skills of Jemiba, but from the plans above, I have tried to clean it up and provide the missing bits. Hope this gives just a flavour of the Ju 186. 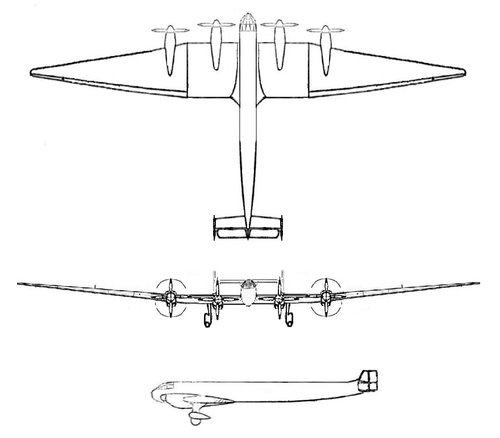 Jemiba said:
In Novarra "Die deutsche Luftrüstung 1933 - 1945" the Ju 186 is mentioned as a planned test aircraft
for high altitude equipment only, not as a service aircraft.
Click to expand...

This is also as written in Putnam's Junkers Aircraft and Engines 1913 - 1945 by Anthony Kay, which includes a paragraph on each, containing only what we know already, but no illustration. Although powerplant of the Ju 186 was four Jumo 208s, derived from the 207 as mentioned in the book's text, or two Jumo 218s, while the Ju 286 bomber was to have six Jumo 208s.
P

As I mentioned, that's what the book says. It doesn't say it was the same engine bored out.

"This was a larger version of the 207 and embodied the continued development of the 206. Only 12 examples were built for development between 1939 and 1942, and no production was undertaken."

Figures provided for Jumo 208B are as follows: