There was anther old escape concept from the 1970s,the Fairchild Model-616
AERCAB aircrew escape rescue capability for combat aircraft,the purpose of
AERCAB was to permit recovery of aircrew who eject from their aircraft over
enemy territory and to provide capability to fly the ejection seat up to 43nm
(50 miles;80 km)at up to 100 knots (115mph;185 km/h) prior to vertical descent
by personal parachute.

the AERCAB had small straight wing and small V-tail.

This two interesting escape concepts are from Boeing from mid 90's.
Published in FLUG REVUE March 1995.

I think that I have it in English. I will take a look @ home.

"The military airplanes division of the Boeing Defense & Space Group
introduced two new designs for fighter cockpits, intended to be usd for
tactical fighter aircraft commissioned after 2005. There are two concepts:
A cockpit with an ejector seat and an aircraft with a rescue capsule.
The high-performance ejector seat would have digitally thrust vector
control, enabling ejection nearl in every attitude. An even better
protection for the pilot has the rescue capsule :Thrust vector
controlled rocket motors separate the capsule from the aircraft with-
out hitting the ground and providing a stable attitude. A controllable
parafoil with a good gliding performance would replace the conventional
parachute.
Both designsshall lessen the pilots workload by automatic processing of
a lot of data and by assessing the situaton. Both cockpits will have large
LCD displays, the cockpit glazing will automatically protect against
blinding lasers. Many analysis showed, that this concept would reduce
workload considerably."

At least the german version probably wasn't the best piece of information,
I think. " ..separate the capsule from the aircraft with-
out hitting the ground" That's the least, what I would expect it to do ! ;D

I saw that article, regarding the Boeing concepts, in Aviation Week.

There was another mock-up(?) for a rescue capsule, not shown in the above mentioned website. Published in aero 12/1962. I've seen this before as an artist's impression, but now I have to realize it left this 'paper stage'. 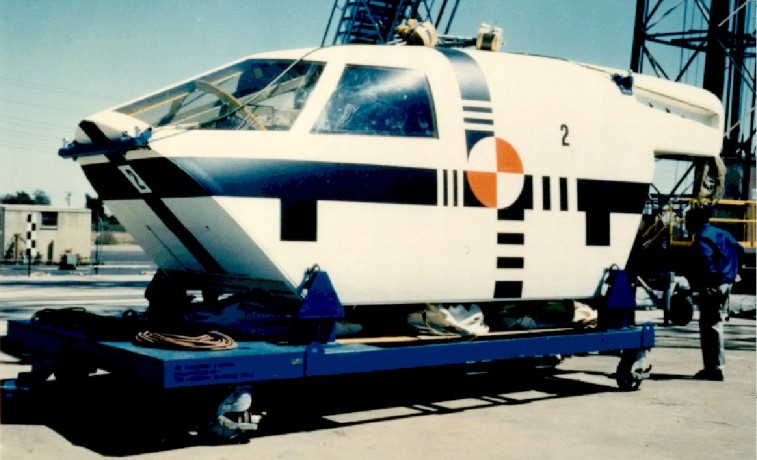 Other escape capsule concepts and mockups

The Miles M.52 had the pilot in jettisonable escape capsule because of the uncertainty about bailing out at high speeds, especially with the annular air intake just behind the cockpit. IIRC from MILES AIRCRAFT SINCE 1925, the idea was to jettison the capsule with explosive bolts and then bail out normally from the capsule.

There was another mock-up(?) for a rescue capsule, not shown in the above mentioned website. Published in aero 12/1962. I've seen this before as an artist's impression, but now I have to realize it left this 'paper stage'.
Click to expand...

I've got a fairly detailed Lockheed report on that laying around here somewhere (bought it for a buck at a used book sale at a library... along with some "Weltraum" magazines from 1939-1942... muahahahahaaaa!). Anyway, I'll see if I can dig it up. Photos and detailed drawings of the several units that were built and, IIRC, rocket-sled tested.

In the mean time, here's what I have immediately to hand...

here from my collection
The B-58 Escape Pod
source: Convair
the Test were made with stunned Bears
over White Sand Testside, New Mexico


i heard that some Prototypes like Boeing 747 or XB-70
had Escape Pods during test phase. true or Internet legend ?

I don't know about the 747, although it seems unlikely to me. Certainly the YB-70 was intended to have escape pods, which would later be used on the service aircraft, but these weren't available for the XB-70. The prototypes did have conventional ejection seats, though.

RLBH said:
I don't know about the 747, although it seems unlikely to me. Certainly the YB-70 was intended to have escape pods, which would later be used on the service aircraft, but these weren't available for the XB-70. The prototypes did have conventional ejection seats, though.
Click to expand...

...Nope. The Valkyrie prototypes all had the pods. From

16 seconds after the impact, the XB-70 started a slight roll. Al White corrected the roll -- and instantly recognized the Valkyrie's peril as she began a snap roll to the right. Ramming the number six engine's throttle to maximum afterburner, he tried to save AV/2 -- but after 2 slow rolls, the plane broke into a sickening spin, taking any hopes of recovery with it. White pushed his seat back into the eject position, but caught his arm in the ejection pod's clamshell doors (see inset photo at left) as they closed. Unable to communicate with the struggling Carl Cross, and unable to eject until getting his arm clear, White could only watch his co-pilot fail to get into his pod for ejection. Finally, with the realization that he needed to get out now, Al White worked his arm clear and ejected just moments before AV/2 slammed into the ground a few miles north of Barstow, California.
Click to expand...

Not a concept, but a limited-production ejection system for aerobatic aircraft, the Zvezda SKS-94 combining a lightweight rocket-launched seat on a telescoping pole with a rocket-deployed parachute to pull the pilot away from the airframe. Nothing much seems to have come of this over the last decade or more, though, so it may already be in the realm of failed projects. Only 50 lbs weight but a hefty US$40k price, the seats were installed in some Sukhoi aerobatic aircraft.

Manufacturer's page in Russian or in English via Google Translate.

Air Racing and Ejection Seats: Part 2 - Can it Work?

The escape capsule, in the form of a detachable nose, was a concept
asked for in France , too, in the specification from 1954 for a supersonic
VSTOL interceptor. In the case of the MS.1001, it could have looked like this :

Mole said:
....a lightweight rocket-launched seat on a telescoping pole with a rocket-deployed parachute to pull the pilot away from the airframe....
Click to expand...

Get those straps right, or we're talking The Wedgie From Hell ;D

Regards & all, and enjoy the Easter