Actually, there's no need to identify them, as the designations are below
these drawings. As given in the header of the NASA paper, source was an
issue of FlugRevue from 1973. I could provide a scan, but it won't give many
other information and it would be, of course, in german.
B

Besides, the original test flown Feuerlilie 55 didn't have canards.

Sorry Hesham,
it wasn't quite clear, that you wanted to know the companies/
organisations, who designed those missiles:

By the way - do we know any picture of the "original test flown Feuerlilie 55"?

I'd rather say Konrad aka Conrad did not have much to do with the Enzian. He only developed one of the engines intended for the missile, as well as for the R 3. But the original idea of the Enzian came from FGZ Stuttgart.

Griehl wrote, the F 55 was developed by LFA and built by Ardelt. No mention about Rh-B!

"By the way - do we know any picture of the "original test flown Feuerlilie 55"?"

I rectify: the original test flown version of the rocket. There were no canards on the built examples. Perhaps the canards would have been placed on a production version.

The thing in Cosford is an wind tunnel model only, I think.
Then, I do strongly believe, these well known pictures showing the F 55 during "pre-flight preparations" show a mock-up only, not the real rocket. It has even no steering surfaces, if you look closely, no inspection hatches, it looks just to neat and to tidy as compared to live German rockets, while silly placed panel lines are visible in some shots.
Only the engine section shot with four 109-553 may show a sub-assembly of an actual F 55 A1.

There were no canards on the built examples. Perhaps the canards would have been placed on a production version.
Click to expand...

Yes, there were probably no canards. But the canards of the 70 cm span were developed indeed, after first test flights and after tests in the AVA Göttingen wind tunnel.

Grzesio, thanks for that, I always assumed it was a piece of flight hardware.
Also, I don't think Cosford have it any more, I couldn't find it listed on their website.
Does anyone here know one way or the other?? 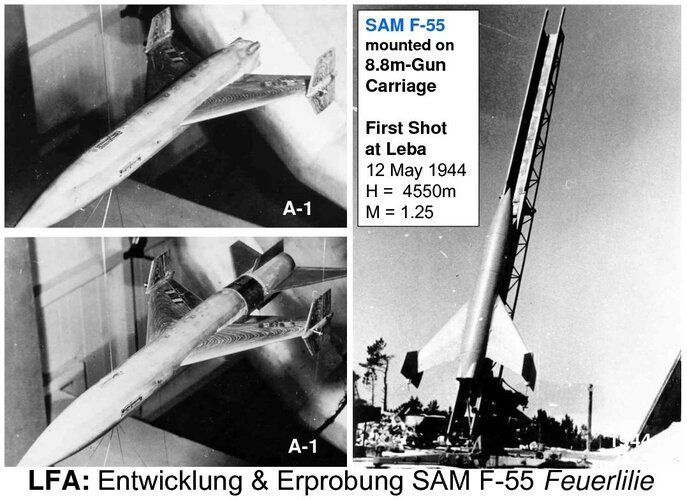