I remember vaguely reading somewhere that there are some provisional drawings in ( maby ! hope my memory is not fooling me ) Air Enthusiast ( i think 1994 , there is a big article on romanian aeronauthical industry in WW2 there ...). Does anyone have these drawing please, i cant find absolutely no drawings,or a side profile , anything so far for IAR-47 ... :-[

There's very little information about this aircraft , and only few blurred pictures exist, all known ones are here...

http://modelism.info.ro/forum/index.php?showtopic=690&view=findpost&p=3579
I remember i saw some specs on another forum , i'll look for them and get back ...

PS:Here's the page with the specs , and an interesting discussion there...aparently the article containing the drawings did indeed apeared in Air Enthusiast nr.56

I have 'Air Enthusiast' 56 in front of me...
Bear with me and I'll get something posted in due course...

Wow, thank you very much Robunos , looking forward to that !

In 1941, it became apparent that the then current Romanian reconnaissance type, the IAR-39, was no longer an effective design. Therefore IAR designed a replacement type, the IAR-47. Effectively a hybrid of the IAr-39 and -80, it used their IAR 14K IV C32 engine.
It's fuselage, based on the IAR-39, was of mixed construction. Compared to the IAR-39, the observers fuselage side windows were deleted, and the crew reduced to two, pilot and observer/rear gunner, armed with a 7.62mm Rheinmetall MG.
Like the IAR-80, the IAR-47 was a low-winged monoplane, and used a re-inforced version of that type's undercarriage. Two 7.62mm Rheinmetall MGs were mounted in the wings, and six 110lb (50kg) bombs could be carried in a bomb bay between the crew's positions.
Reconnaissance was it's primary mission, however, and the bomb bay was normally filled with a fuel tank, increasing it's normal fuel load of 127 Imp gal (580 l) to 209 Imp gal (950 l).
The mission fit was three cameras, one vertical and two 45o oblique, in the fuselage underside.
The unarmed prototype was flight tested in autumn 1942, and exhibited good handling characteristics. However, in the light of the improved Soviet fighters now in service, it's low powered engine, and light armament, it was considered obsolescent, and anyway, all of IAR's production capacity was required for Bf109 production.
Therefore development of the IAR-47 was stopped in January 1943, the prototype being destroyed in a USAAF air raid in 1944.

Image below shows a PROVISIONAL side view of the IAR-47.

Thank you Robunos for posting this , it is a very interesting read indeed!

Obviously the author used whatever little information he had at that time which wasnt much . It looks from what i can gather around ( and the few blurry pics existing ) that there were maby 2 prototypes , one had fuselage glazing -probably- for a 3rd member, while the other ( YR-IGR) doesnt seem to, but it might have been modified in time , who knows. Also the wing seems to have the root extended forward for the landing gear ( like the Macchi fighters , for instance ).

Also in the TMA book about IAR-80 , brief info about IAR-47 states that the incomplete prototype was transfered in 1940 to SET and the prioject finished there ( in modified form )and flown in 1943( ?).

Again , thank for sharing this Robunos , much apreciated.
L

Something very interesting ... i was just going thru Max Axworthy's "Third Axis Fourth Ally" book ( 1995) and in the Romanian aviation chapter( which by the way , it's brilliant , even if some of the info might be old and maby a bit inacurate, it is exceptionally well made for that time. Hats of to him and Mr.Craciunoiu and Scafes who are the co-authors), there's some info on the IAR-47 , which doesnt differ much from what was written in Air Enthusiast , EXCEPT the performance of the machine. Here is what it says in the book:

on wikipedia english we speak about three guns of 7,62 mm .

That third machine gun is probably the observer's gun on a flexible mounting.
P

Now, does anyone have any speculation on what the IAR-471 looked like?

From http://beyondthesprues.com/Forum/index.php?topic=197.165, I found these two profiles, showing the differences between the two prototypes of the IAR-47. The top one, with the additional windows was destroyed in a bombing raid, but the other one with the civilian registration, survived until the 1950s at least, as seen in the attached photograph. 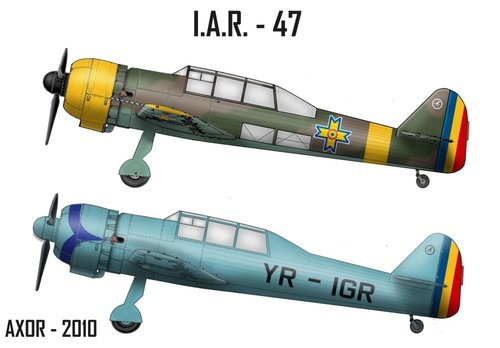 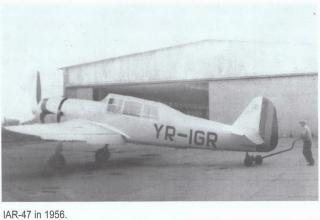 A larger version of that photo of the second IAR 47 marked as YR-IGR. The image came from a collection of photos on the Cartula discussion group:
http://www.cartula.ro/forum/topic/7267-iar-47/ (Post #4)

Alex (axor) based his profiles on those photos.