This interesting photo was published in the russian magazine "Aeronautics Gerald" (Вестник воздухоплавания) at December, 1910.
The caption reads: "New original biplane by prof. Гатчинсон was built recently in England and just has made a flight over the sea bay"

I suppose that Гатчинсон = famous aerodynamic F.W.H. Hutchinson. But there are now any information about his constructions (exept Frost orthopter) nor in the book "British aircraft 1808-1914" neither in "British aircraft before the Great War".

Couldn't you clarify what is in the photo? 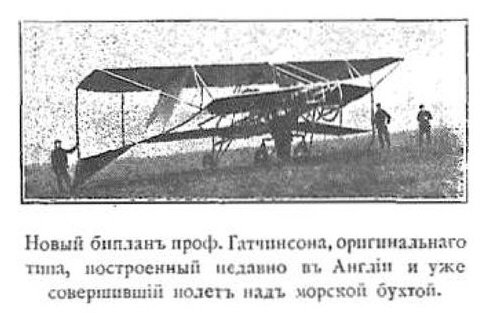 This is actually Prof. Huntington, one of the pioneers at the Royal Aero Club flying ground at Eastchurch. The aircraft was built in partnership with John Dunne

https://eastchurchaviationmuseum.org.uk/
It is described in British aircraft before the Great War