how small can LO/stealthy combat aircraft designs get?

Posting a new thread since @Overscan felt it should be a stand alone topic.


What is the "smallest" a 5th or higher gen manned LO aircraft can be?

but with the need of having an internal bay, this may limit the minimum size of an aircraft.

With MiG throwng out all kinds of models, it made me want to talk about what the minimum size manned LO aircraft could be?
- Bays? could a light weight LO aircraft just have one bay, like many of those stealthy UCAVs?
- Range? bays take up space for what could be used for fuel. If its a small design, it likely wont have much range.
- Does one need LO for a short range fighter? usually LO is associated with stealthy strike, which requires range. a short range fighter tends to be more defensive.. is LO necessary?
- UCAVs, would UCAVs be a better fit for the field of small LO fighters?
T

The smallest stealth fighter aircraft will have only directed energy weapons on-board, long range radar offset on the cloud (data link b/w heavier aircraft and satellites), hence only a small aesa inboard, a FLIR and an IRST (that might have a commune aperture with the laser)... And that's it.
Every A2A missiles (long range aam) would be carried by a teamed UCAS and all A2G weaponry would be also carried by the UCAS or would be a swarm of suicide drones, gliding weapons and cruise missiles (gliding weapons launched from the back of a cargo aircraft).

Your minimal Stealth fighter would then be optimized for fuel carriage to fly and cool its weapons and sensors. The fuel fraction would then be probably very high (including the non usable fuel stored in normal operating conditions).
Last edited: Wednesday at 1:08 AM

To make a jet smaller vs F-35 or this Checkmate prospect.
Well you go down to Drone town, don't you?
So right there is the threshold i think.

One could try the 'brain in a jar' approach, though that would have major ethical and other implications.
S

Technically suicide drones are LO by their very nature so a quadcopter with an IED attached is the smallest you can make it.
Z

I think it's possible to have a smaller but still useful manned aircraft if you drop the supersonic and turning performance requirements while keeping range and payload relevant. Think more of a stealth A-4 or A-7 than F-16. Such a hypothetical aircraft would obviously require a large development program without bringing anything to the table that a slightly larger but more versatile stealth fighter can't, which kind of explains why we haven't seen a plane in this category since the F-117.

However, like others here have said, the obvious answer to your question is drones.
T

Someone revived an old similar thread. It reminded me of my idea for a wet weapons bay (the bay is filled with fuel and can close hermetically). That would be a good way to carry internally a pair of medium range missiles in such a small airframe (you obviously use the fuel stored in the bay first).

Tricky to pull off though.
T

Many Hypersonic drones in the US have had their avionics submerged inside their main fuel tanks.

weeeell... Advanced Trainers are smaller than an F-16.
Yak-130 etc. And they can carry weapons. So there is that. But trainers have their own capability limitations.

With weapons bays I think the smallest manned stealth fighter you are going to ever see would be gripen sized, just maybe a tad larger.
H

Anyone considered submerged weapons or fuel tanks (like those on the strike F-15) that add to an aircraft's stealthiness but can be jettisoned and still make the aircraft stealthy? That way you could at least have a standoff interceptor that becomes more and more like a fighter the more ordnance it drops. 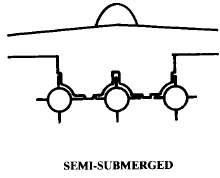 Hypersonics Anonymous said:
Anyone considered submerged weapons or fuel tanks (like those on the strike F-15) that add to an aircraft's stealthiness but can be jettisoned and still make the aircraft stealthy? That way you could at least have a standoff interceptor that becomes more and more like a fighter the more ordnance it drops.
View attachment 661280
Pure speculation, of course.
Click to expand...