An incredible Hiller project of 1964.

the Hiller Type-1108 was tip turbojet-powered very heavy helicopter project,
it appeared in 1964.


Update
Urp: My Bad....this is a different Chopper
The one I was thinking about is mentioned here...
http://www.thespacereview.com/article/1045/1


Update
Urp: My Bad....this is a different Chopper
The one I was thinking about is mentioned here...
http://www.thespacereview.com/article/1045/1
Click to expand...

I thing it was not,and here is a model for it.

Did this flying crane project compete for a USN program with McDonnell's Model 86 XHCH-1? They seem to be very similar in size and shape.
S

After investigating the matter for awhile, I have found means of identifying some of the many flying crane designs from Hiller:
- The Model 1108 is a Hiller-Continental proposal that won an Army contract then was canceled.
- The helicopter in Hesham's second post is NOT the Model 1108 but most probably the Class HC HEAVY LIFTER.
- The Hiller/NASA crane that was supposed to carry the Saturn V boosters is NOT the Model 1045 (the type is already identified as a T-tail tilt-wing proposal and the date is much too late for that number).

Here is a text found on the web (taken from J. P. Spencer's Whirlybirds: A History of the U.S. Helicopter Pioneers, 1998) and some new photos that shed some new light on the subject and recapitulate all the power-blade type flying crane projects that Hiller came up with:

In 1949 the company built and tested the Hiller Powerblade, the world's first hot-cycle pressure-jet rotor. Hot exhaust gases ducted through various Powerblades produced greater efficiency, which was further boosted by the use of "tip burning", a term describing the combustion of fuel at the blade's exhaust nozzle. However, even this arrangement yielded substantially less propulsive efficiency than was obtainable by mounting jet engines right at the rotor blade tips. In 1950, therefore, Hiller abandoned the pressure-jet approach to tip propulsion and dedicated his company to experimentation with tip-mounted engines.

Over the next fifteen years, Hiller actively pursued the construction of tip-powered flying cranes with a variety of jet engines at their blade tips. In 1951, the [Hiller] company offered the Army a midsize flying crane called the "Aerial Carryall" or "Flying Truck".
Click to expand...

This could be the quoted Model 1005 flying crane.

It also responded to a Navy request for an aerial-resupply helicopter with the huge "Class HC Heavy Lifter", a collapsible flying crane of tubular construction. Neither of these efforts reached the prototype stage.
Click to expand... 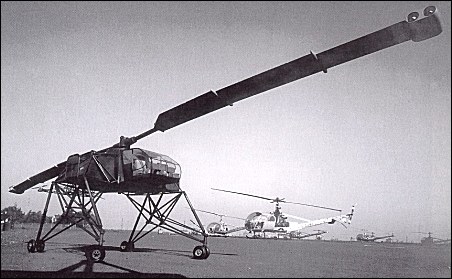 This photo most certainly depicts the Class HC HEAVY LIFTER in mock-up form.


The Army requested a design study for a flying crane with a 60m rotor in the mid-1950s. Hiller's response was BARC, an acronym for Besson's Aerial Railhead Crane. Named for Major General Frank S. Besson, chief of the Army Transportation Corps, this proposal similarly failed to find support. Neither did a series of parametric studies for a variety of tip-engined flying cranes that Hiller prepared in response to a 1955 military request.
Click to expand...

No pics of these projects so far... About the Model 1108, presented in the first post of this page, also known as the Hiller-Continental FLYING CRANE:

By decade's end, it appeared that Hiller's continuing tip-propulsion efforts might at last pay off. Prompted by this promising body of exhaustive research, including thousands of hours of tip-powered rotor testing on Hiller whirlstands, the Army solicited industry bids for a tip-turbine-powered flying crane in the Hiller mold. Clearly favored to win a contract, Hiller teamed with Continental, manufacturer of the J69 turbojet engine. Although the Hiller-Continental team won the initial contract, funding for this Army program was cut in the early 1960s before a prototype was produced.
Click to expand...

This is the Hiller-Continental crane, also known as Model 1108.

Company hopes for giant tip-powered helicopters revived briefly in 1965 when the National Aeronautics and Space Administration considered sponsoring a Hiller flying crane to recover Saturn V moon booster first stages during Project Apollo. Aerial recovery of this spent first stage, which weighed up to 400 tons, dictated that the Hiller/NASA recovery vehicle be the largest aircraft of any kind yet proposed. The resulting design featured a gross weight of about a 450t and a rotor more than 100m in diameter. Powered by two or more jet engines per blade, this rotor would have turned at 60 rpm, presenting the illusion of slow motion to observers below.

As laid out, the Hiller/NASA flying crane would loiter at 3000m some 750km downrange from Cape Kennedy. Sighting the moon booster descending by parachute, it would use special recovery gear to snag the spent rocket and winch it securely in. If the first pass was unsuccessful, sufficient time would remain for two more attempts before the booster was too near the ocean's surface for another try.

Expensive as such a helicopter would have been, the huge aircraft would have paid for itself with the first several recoveries. But long-range planning for the nation's space program was beginning to favor the concept of a reusable space shuttle over single-use rockets, and this recovery helicopter was not funded.
Click to expand...

An artist's view of the Hiller/NASA crane proposal.


We should also add to all these helicopter-type projects a series of ducted fan/shrouded rotor flying crane proposals, all derived from research gained on the Model 1031/VZ-1 program, and as yet undesignated (see attached files).

To make matters even more complicated, here are two Hiller heavy lift designs, that
surely are related to those already shown (mainly model 1108), but designated
H-1089 A and B here:
(from Les Ailes February 1961)

thank you my dear Jemiba very much.
S

A Hiller Flying Crane concept, circa 1957:

In Aero, September 1964, I've found a 2-view of the STORC (in configuration for fixed-wing
and rotary wing flight) and an artist impression, that should show the STORC, too, but too my
opinion it's more akin to the H-1089A.

I have a color version of the same picture, which I filed under "Model 1108" but perhaps you're right about it being a 1089. I do not know exactly how different the two crane helicopter projects were.

Then we have a problem, I think, because here http://www.secretprojects.co.uk/forum/index.php/topic,6820.msg118728.html#msg118728
he already had identified another type as 1108, which, with regards to Les Ailes 1961, could be the 1089 as well, at least to
my opinion. Had a look inbto the NASA paper, where the picture comes from. Not absolutely clear, but in one of the
tables there, the Hiller 1108 is mentioned, making it quite probable, that it actually is that type. Nevertheless, some
posts later another type again is designated as 1108 ....
If nobody minds, I would merge this thread with the "Hiller Type-1108" one, at least, until clarification.


I do not mind to merge them.
S

Some studies published by Aviation Week in 1953:

Not sure what the second drawing is - was part of the article and worthy of inclusion.

Thanks a lot for these fine images, Mark!

Here two pictures of the Hiller Model 1098 STORC model from an another source:

The caption reads : A model of the Hiller-Continental flying crane "flies" in a wind tunnel in the early 1960s.

Apart from mentioning utilizing a turbojet tip rotor very little detailed information on the flying crane is in the book which mainly covers built designs.

hesham said:
From University of Illinois at Urbana–Champaign project hummingbird 1961,
Click to expand...