S. Helmy was Egyptian and he lived in UK,he designed the Aerogypt-I,it was a
four-seat low-wing light transport airplane,powered by three 22 hp Douglas Sprite
engines,appeared in 1939 and later flown as Aerogypt-II without hanged roof,
and in 1940 flown as Aerogypt-III with end plate fins.

The Aerogypt-IV was developed from the same series,but powered by two 65 hp
Continental A65 engines and fitted with tricycle undercarriage.

Lots more on the Aerogypt to be found at http://forum.keypublishing.com/showthread.php?92132-Helmy-Aerogypt&highlight=helmy%20aerogypt and http://forum.keypublishing.com/showthread.php?105061-Helmy-Aerogypt. Somewhere I must have copies of the Saleh Helmy papers that were kindly supllied to me in 2009. I'll have a hunt this week.

Thank you my dear Avion.

Here's a publicity shot of the Aerogypt I, with the young lady being helped out of the aircraft by the kind gentleman. 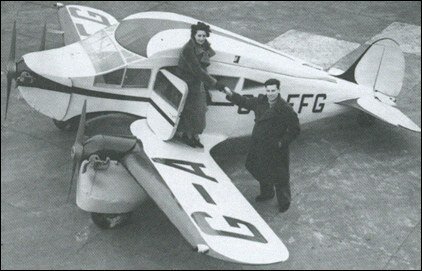 I'm a bit surprised that he was allowed to work on the Aerogypt IV in 1943 with the war still raging.

Still I haven't looked for the copies of Saleh Helmy's papers - which, four years ago, I said I would. I will try to do so.

Grey Havoc said:
I'm a bit surprised that he was allowed to work on the Aerogypt IV in 1943 with the war still raging.
Click to expand...

Well technically Egypt was not at war with Italy or Germany. Remember that Egypt was not part of the formal British Empire and had its own monarchy and government and military forces that were 'advised' by London as a de facto puppet state. That's why there was no Egyptian participation in the fighting in North Africa and why they were generally unhappy about British military occupation and the war being fought on their doorstep over the Suez Canal which they did not own. It was a curious affair with the Axis forces attacking British forces in Egypt and Britain defending Egypt but with the Egyptians more or less being ignored by both sides as bystanders.

So as long as he could obtain materials, Helmy was probably free to do as he liked.

The work was undertaken at White Waltham, rather than in Egypt. Ord ('British Light Aeroplanes') says that on the outbreak of war, when Helmy joined the RAF:

Nothing further was done to the [Mark III] Aerogypt until early in 1943 when, as Flt-Lt Helmy, he was given permission to continue experiments in his own time. Considerable problems were encountered with control-flutter and also with the jerky, undamped undercarriage suspension.

The aircraft was flown to White Waltham where it was radically rebuilt. The three Sprite engines were discarded and replaced by two Continental A-65 motors and a tricycle undercarriage. At this time, Helmy had formed a new company called Aerogypt High Speed Development Co. Ltd..

Tests with the Aerogypt Mk. IV as it now became proved satisfactory and it was noticeable that the initial rate of climb, only just over 200 ft/min with the total of 66 hp available on the Mk.1, had now increased to 600 ft/min..
Click to expand...

The Aerogypt did have an Egyptian connection. Pre-war Helmy had plans to produce 'scaled up' versions of the Aerogypt, in various sizes up to that of a small passenger airliner, in Egypt and, it is said, that he had secured state funding for this. After the war, Helmy sought to revive these plans and so planned to fly the Aerogypt to Egypt in November 1947. Unfortunately the Aerogypt's flight from White Waltham to Cairo got no further than Northolt (where it was planned to clear customs). On approach the Aerogypt snagged overhead cables, stalled and crashed. The Aerogypt was badly damaged in the crash and further damaged when it was dropped by the crane that was recovering it. The Aerogypt never flew again and saw out its existence as a hen coop in the garden of a house near White Waltham Airfield, where it expired at some time in the 1960s.

I have now found my copies of the Saleh Helmy papers - a dusty CD-ROM on top of a book case - and I'll study these as soon as time permits.

Grey Havoc said:
I'm a bit surprised that he was allowed to work on the Aerogypt IV in 1943 with the war still raging.
Click to expand...

It appears that, during the war, Helmy held a senior position in the MAP. Maybe this, and the fact that the Aerogypt apparently was under evaluation prior to the outbreak of war, contributed to him being given permission to work on it from 1943.

avion ancien said:
The work was undertaken at White Waltham, rather than in Egypt. Ord ('British Light Aeroplanes') says that on the outbreak of war, when Helmy joined the RAF:
Click to expand...

I stand corrected, I had forgotten that.
Given that Miles was able to circumvent MAP restrictions for their private testbeds I am sure that it was possible to obtain some items and surplus equipment. I wonder where the Continental A-65s would have come from?
British Taylorcraft/ Auster were fitting Lycomings and I can't think of another British manufacturer using Continentals at this time.
Share:
Facebook Twitter Reddit Pinterest Tumblr WhatsApp Email Share Link