Navy researchers are asking industry for ways to design equipment that can detect, track, and shoot down incoming rocket-propelled grenades (RPGs) that threaten helicopter RPG attacks on U.S. and allied aircraft operating on or near the ground.

Officials of the Office of Naval Research (ONR) in Arlington, Va., issued a presolicitation Tuesday (N00014-15-R-BA14) for the Helicopter Active RPG Protection (HARP) program, which seeks ways to defeat an RPG with an expendable countermeasure launched from a tiltrotor aircraft or helicopter.

Instead, tiltrotor aircraft and helicopter aircrews depend on tactics, techniques, and procedures (TTPs) to defend themselves from RPGs and other unguided threats, ONR officials say. The kinds of emerging technologies that could defeat RPGs with hard-kill expendables are a particular focus of the HARP Future Naval Capability (FNC) project.

HARP technology should be developed with open-systems technologies in mind, and proposed HARP architectures should link into existing aircraft survivability equipment, such as the hostile fire indication (HFI) cueing from the AN/AAQ-24(V) Advanced Threat Warning (ATW) sensor.

Researchers want HARP's expendable countermeasure to be compatible with launch from the AN/ALE-47 Countermeasure Dispense System (CMDS). On cueing, the HARP system must sense the inbound RPG, reject false alarms, and shoot down the RPG far enough away so that it doesn't damage the aircraft.

The HARP program has three phases over four years: prototype concept; build a prototype; and build prototype hardware, code prototype software, and demonstrate the system in relevant environments, which include a tethered hovering helicopter. Three or more HARP contractors may be chosen for the potential $14 million program. Contract awards could be as early as July 2016.
Click to expand... 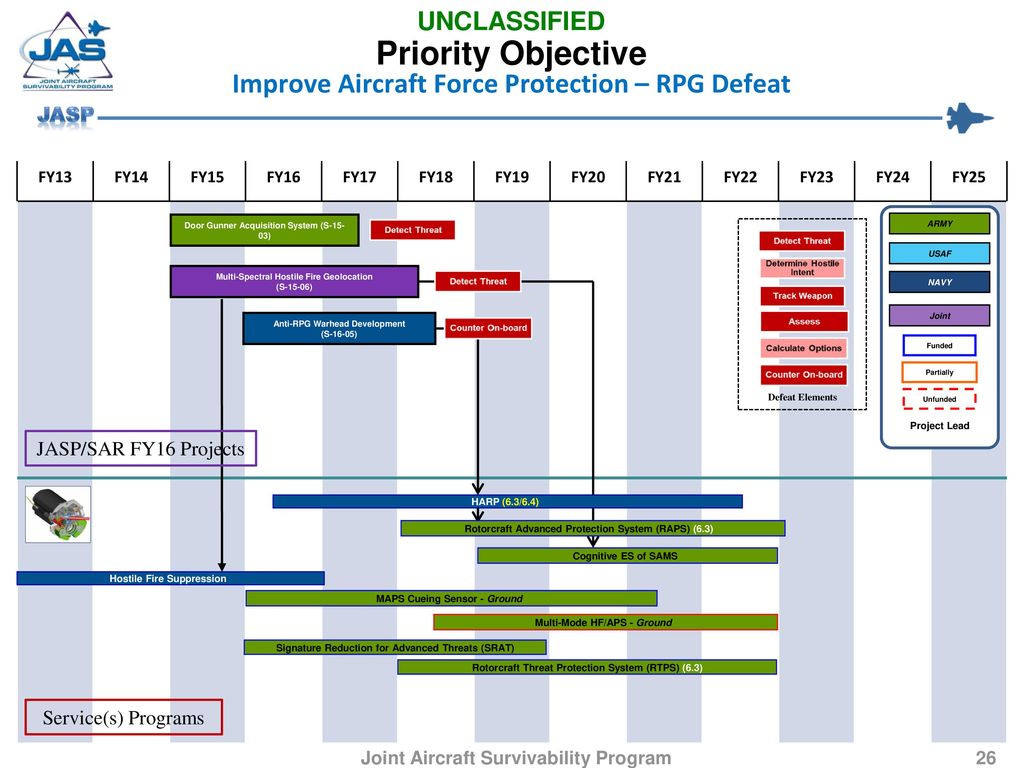 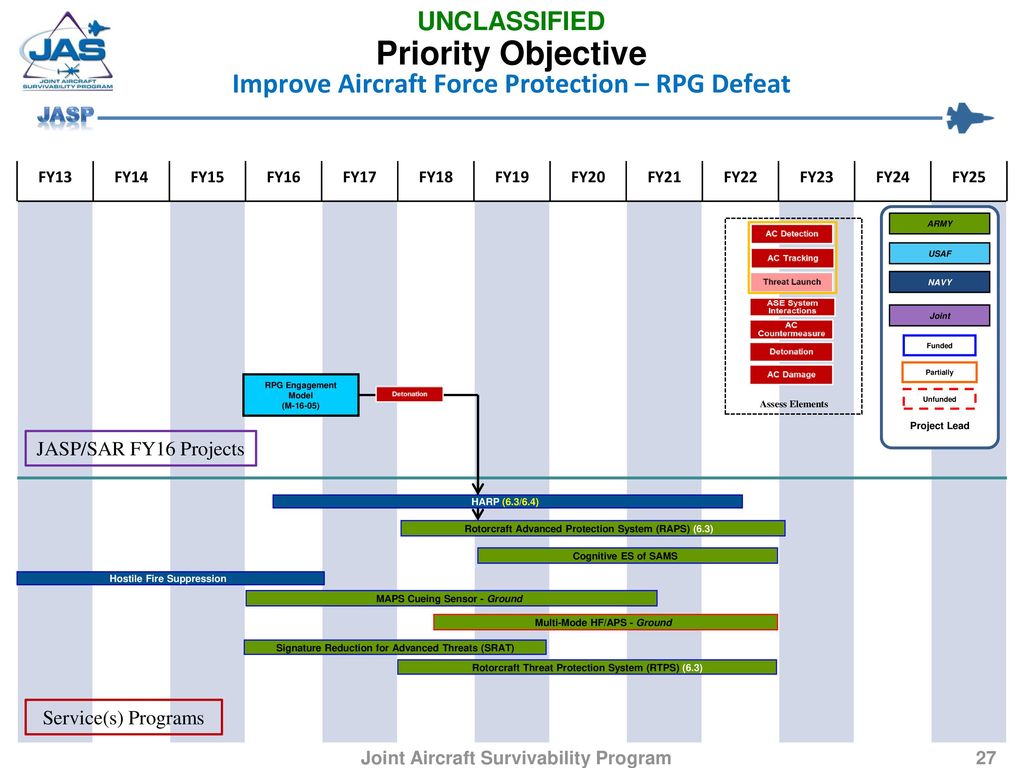 TO KILL AN RPG
The greatest weakness of an RPG is also arguably one of its greatest strengths. An RPG is an unguided weapon, meaning it contains no seeker or other electronics designed to guide the weapon toward a target. This weakness has typically required operators to position themselves close enough to ensure a direct hit on a moving targeted aircraft. 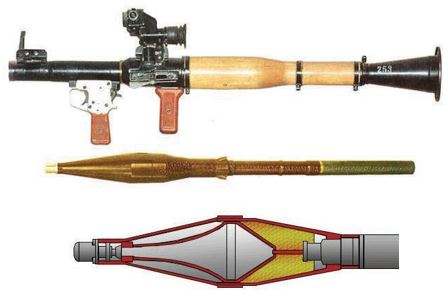 A weapon of this nature also brings forth many challenges to defend against it. An RPG, such as the one shown in Figure 1, does not have any guidance electronics capable of being jammed/tricked/or spoofed; wherever the RPG has been aimed, it is going to hit. Thus, a kinetic approach is one of the defense mechanisms being considered to counter RPG engagements against aircraft. One such method is to use an APS to detect, track, and deploy a defensive missile (aka a kill vehicle [KV]) and destroy the incoming RPG before it can make contact with the aircraft.

The focus of this project is to deter-mine what types of KV payloads are capable of destroying an RPG once the KV has successfully guided to its intercept. Our design objective was constricted to fit the KV within the standard Mobile Jettison Unit (MJU) flare size for the ALE-47 flare dispenser (shown in Figure 2). In the event that the objective could not meet lethality requirements, however, the ALE-47 tubes could be modified to fit a larger warhead. 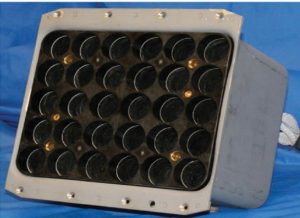 Another critical performance requirement was to minimize collateral damage, whether it be to troops on the ground, a wingman, or the launching aircraft itself. Strict timelines of intercepting close-range RPGs, near-by friendly troops during landing or take-off, and wingman aircraft could cause some engagements to occur extremely close to friendly aircraft or troops. Thus, lethal fragments from either the KV or RPG itself must be minimized.

NOTABLE WORK
Destruction of RPGs has been studied in the past by many Government laboratories and contractors. Most related to the work for this project is the research that was conducted by Lovelace et al. [1] at the U.S. Army Aviation and Missile Research, Development, and Engineering Center (AMRDEC) and Suarez et al. [2] at the U.S. Army Armament Research, Development and Engineering Center (ARDEC). In addition, based on the similarities in their goals, the U.S. Naval Air Warfare Center – Weapons Division (NAWCWD) teamed up with ARDEC to further the research in this area.

NAWCWD’s approach to reduce collateral damage uses an optimized liner designed to produce high-velocity fragments in the near field of the engagement but to slow down rapidly shortly after the engagement. The material, shape, and size of the fragments have been specifically chosen to provide effectiveness within the miss distance of the APS projectile and then slow down rapidly from air-induced drag.

Additionally, Lovelace et al. were able to demonstrate improved performance against RPGs over pure blast explosives by adding additional impulse to the engagement. However, there was some concern if this approach would be viable, when combined with the smaller amount of explosive, and ultimately be able to damage the RPG.

As such, a related approach was further investigated. Mike Jenkins from the U.S. Air Force Research Laboratory (AFRL) has performed multiple experiments on the efficiency of driving liners by explosive [3]. Using his research, a warhead configuration was optimized for the destruction of RPGs. Figure 3 provides an example of estimating liner ejection velocity and pattern as a function of distance from explosive detonation. 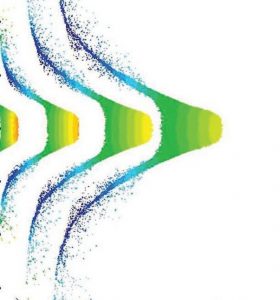 NAWCWD formulated two different types of experimental explosives: one impulse-loaded explosive and one highly brisant explosive. The impulse-loaded explosive is designed to produce a longer lasting pushing force on the warhead liner, where the brisant explosive is designed to produce a sharp high-amplitude force on the liner. These warhead designs were then both fabricated in two different diameters for a total of four warhead designs (shown in Table 1).

To test the effectiveness of the experimental warheads, two RPGs were placed at the same distance from the center of the warhead prior to detonation (as shown in Figure 4). One RPG was placed on its side to represent perpendicular intercept geometry, while the other RPG was placed nose down, representing parallel intercept geometry. To test the low collateral nature of the warheads, plywood boards and foam panels were also set up at selected distances. 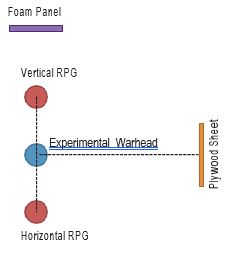 RESULTS
All four experimental warheads exhibited effectiveness against the perpendicular RPG in a similar manner; the RPG warhead section was pitted and ripped apart, much of the explosive remained inside the RPG, and the shaped charge jet (SCJ) liner was jettisoned from the body. In addition, the RPG section facing the warhead showed evidence of being blasted with high-velocity liner material (as shown in Figure 5). The nose cone on the front of the RPG was also blown off of the body, removing the impact sensor. The potential damage by the RPG debris from a successful KV interception is being studied simultaneously in a separate JASP-funded project.

The parallel RPG was affected most by Warhead B (see Figure 6). As shown, the RPG was severed at the base of the nose cone, and the SCJ liner was jettisoned along with some of the explosive material.

Interestingly, Warhead D was the same warhead design as Warhead B, albeit scaled to a larger diameter, yet it produced less damage against the parallel RPG. It was later assessed that the increase in the amount of explosive in Warhead D shocked the liner in the warhead hard enough to spall it into smaller fragments before they made contact with the RPG. This phenomenon has been studied by Ripley et al. [4]. The smaller fragments had much less mass and were unable to impart as much kinetic energy onto the RPG as Warhead B. 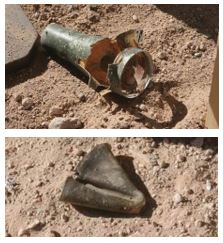 Warhead B showed the most effectiveness against both parallel and perpendicular engagement geometries, but the collateral damage metric still needed to be evaluated. The foam and plywood panels were examined after each test and revealed no perforations through the material from any of the tests. The foam material was much closer than the defined nonlethal distance and still remained undamaged. High-speed video evidence showed rapidly decelerating fragments ricocheting off the foam barrier, unable to impact with enough energy to penetrate into the foam (as shown in Figure 7). The only blemishes on the foam were blast marks created from panels set up in the arena to protect instrumentation (aka “testism”, or artifacts resulting from the test setup itself), indents from where the parallel RPG would make contact after being heaved, and bits of plastic foam from the test stand. All of the warhead designs were extremely low collateral, with one of the designs showing improvements in effectiveness over the others. 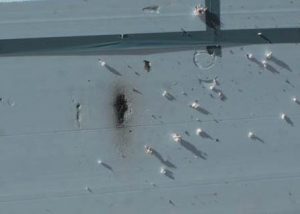 FUTURE PLANS
For the future, we will focus on increasing the effectiveness against RPGs using another unique lethality mechanism: self-consuming fragments. These fragments start reacting upon impact with the detonation wave and start ejecting mass until they become nonlethal. The idea behind these fragments is that they will be potentially more lethal within the expected miss distance of the engagement but will consume themselves shortly after and become nonlethal.

SMART D2 provides two-way communication between the dispenser and aircraft using the NATO-standard Smart Stores Communication Interface, providing crews with critical inventory information and the ability to program expendable, active decoys in real time to improve survivability against advanced threats. The system monitors the quantity, location, age, and carriage life of each expendable on the aircraft and can deploy a tailored mix of smart countermeasures to efficiently defeat specific threats.

This article, which is an update to work previously published in the summer 2018 issue of Aircraft Survivability, presents test and analysis results for warheads designed to dismember and/or dud incoming rocket-propelled grenades (RPGs) while simultaneously meeting stringent active protection system (APS) collateral damage requirements. As discussed, the near-field-velocity liner warhead technologies previously developed were found to be successful at minimizing collateral damage away from the RPG intercept point; however, only one design inflicted sufficient damage to the RPG to be considered a viable solution. Thus, it was determined that a new warhead concept was needed to provide the same limited level of collateral damage previously demonstrated while also having a significant increase in lethality to the warhead. What was needed were self-consuming fragments, which have the potential to improve lethality against RPGs over the previous lethality mechanism tested in Phase I by introducing larger fragment masses that are still capable of meeting collateral damage requirements.

I wonder what happened to the ATK HAPS (Helicopter Active Protection System). It seems like projects just die without a trace and people forget they existed. Yes, some years old.
B