I seem to recall several years back that there was some sort of oddball proposal for a pure tanker aircraft based on the Gulfstream business jet. Might have been for a USAF study, but given the current controversy with the A330 vs. KC-767 (damn, way to screw up the MDS, guys!) and that the USAF seems to want more booms than airlift, something about a Gulfstream-based proposal has fired off a few neurons in the old noggin. Anyone recall or have information on any such program from say, 10 years ago or so?
A

Don't know if this help or not, but I heard that the Israelis consider (ed?) a tanker variant of the G.550...

I have more detailed information and pictures somewhere, but I am not able to find it at the moment.

Here's a few links regarding:

GTX said:
Here's a few links regarding:
Click to expand...

The links have gone bye-bye in the intervening years, unfortunately. 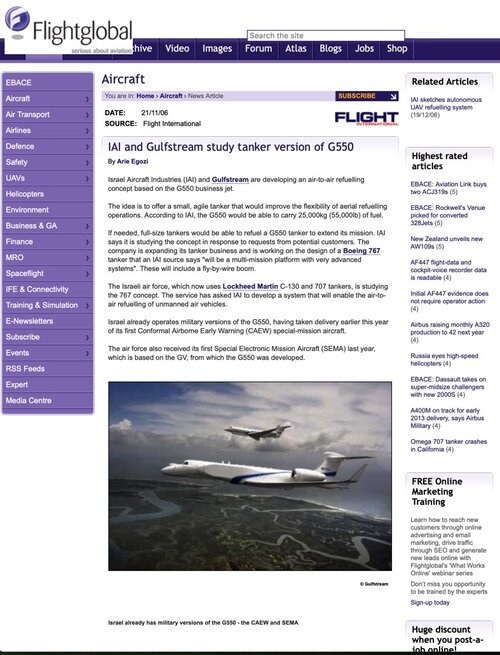 Lousy quality but here's an image of IAI's G550-based SSTT (Small and Smart Tactical Tanker) proposal. The tail fairing is similar to that of other IAI Gulfstream G550 developments (like CAEW and the underslung SIGINT/MP variant).

At first glance it sounds odd, but its offload capacity is similar to a 737 or C-130 offering with the benefit of much higher cruising speed. At least with the KC-135 their boom was rated at ~335 knots so a similar speed boom would be developed by IAI?
Share:
Facebook Twitter Reddit Pinterest Tumblr WhatsApp Email Share Link