Hello all. Whatever you want to call it a quite important aircraft for (at least) British aviation. But scant information that I can find on the internet that isnt a repeated source.

Specifically I am currently looking for some decent cockpit photos. I have come across two black and white low resolution photos. Ideally I would like something along the lines of this:
http://www.flightglobal.com/pdfarchive/view/1948/1948%20-%200521.html?search=gloster%20whittle
which teasingly is quite a nice diagram of the panel layout of the E.1/44...

Also some photos of the rest of the cockpit, sides and back would be good.

Any help is much appreciated.

Hole in the ground
S

Just a small question... I've always refered to this aircraft as the Gloster "Skirt"... Is this a mistake, or was that nickname also used at some point?
H

I believe "Squirt" was a gloster in house name for it.

At least so it says in Test Pilots by Don Middleton

I know the first example of the Bell XP-59A Airacomet was nicknamed Squirt.
J

Oooooh... I just LOVE that prototype. Could never tire of it! Thank you so much for sharing all this wonderful material, Justo!
H

My hero. Thank you ever so much
J

Forgive me as I am not an aircraft expert (or historian) but it strikes me how the Gloster design *seems* closer to the later Soviet MIG 15 and US Sabre designs.

Was the Gloster design never considered for further development as a fighter? Or was it a case that it was a little too ahead of it's time and the engine power just wasn't up to the job (hence the adoption of the twin engined Meteor design)?

I think the E.28/39 specification called for a technology demonstrator, pretty much like the similarly configured Heinkel He 178. This being said, the configuration was pretty similar, NOT to the aircraft you mention (which had swept wings), but rather to the Republic P-84 Thunderjet, so yes, it probably would have been a rather capable little fighter. The question is: why did they not do that? I have no answer.
B

Many thanks for that reply,

strange isn't it - but maybe it's a case of hindsight is a wonderful thing?

I checked out the Thunderjet, and yes I can see how one can imagine how a Gloster fighter based on the E.28/39 might have looked and performed in service.

It's interesting to wonder - sorry to speculate - what kind of performance a swept wing Gloster E.28/39 might have had and how it might have compared to the later MIG 15 (what's in the back of my mind is how much the MIG 15 was dependent on the work done by Whittle and indeed, the dependence on the British jet engine - so, in effect, is the MIG 15 the Gloster that might have been? - Yes, I know - I'm stretching it here!).

The speed of the technology progress during that era perhaps? In time when the hypothetical production version could enter service it could be already obsolete. Also the dependability of the very early jets wasnt just ideal for the operational service.
A

beaty1961: why twin Meteor, not militarised "Squirt"? Matej is, I submit, right. Grunt. Airframes evolved more rapidly than reliable reaction oomph. E.28/39 Spec included provision for (not fitment of) 4xBrowning .303 MG, though it was funded and awarded to Gloster simply as a technology demonstrator. "Gyres' " thrust, s.f.c and installed life would in 1939 be insufficient for any military purpose. So, why, in 1943 when (to be) RR Welland and (to be Halford H.1/DH Goblin) offered such attributes, did MAP fund single-engine DH.100 Spider Crab (to be Vampire) and twin (to be) Gloster Meteor? Simply the "insurance" principle that had caused multiple "Heavy" Bombers, Fury+Spiteful, &tc, &tc. MAP did not deliberately want Meteor to be deployed before Vampire: Gloster/HSAL+RR just got there quicker than DH/EE+DH. Bell Airacobra was twin, too. The first UK turbine with grunt, Nene, permitted MiG-15, F9F-2, Attacker and Sea Hawk to be cheaper, easier singles; GE, turning W2/500 into J35 (for F-84s) got good grunt quicker than did RR evolving W2B as Welland, then Derwent, but it was not until F-84G that their single engine type overtook the Gloster twin. LaGG-15 with 1xDerwent never did.
H

beaty1961 said:
Was the Gloster design never considered for further development as a fighter?
Click to expand...

In fact there was, the Gloster E.44
flight global to the rescue again

And the following document that Stargazer found in another thread:

On the aerodynamics of the Gloster E28/39 - a historical perspective.
http://www.raes.org.uk/pdfs/3272.pdf

Many answers to the questions in this thread, and a list of references with close to 100 items.


here is the Early two schemes of Gloster high-speed aircraft,designed by Mr, George Carter,
and led to develop the E28/39,also the a revised version which was very close to the final
shape of the aircraft.


Jet Pioneers. Gloster and the Birth of the Jet Age

hesham said:
here is the Early two schemes of Gloster high-speed aircraft,designed by Mr, George Carter,
and led to develop the E28/39,also the a revised version which was very close to the final
shape of the aircraft.

Jet Pioneers. Gloster and the Birth of the Jet Age
Click to expand...

The first two configurations looks like a Germany designs in the period of WW2 !.

On a related note: http://www.telegraph.co.uk/news/2016/05/08/sir-frank-whittles-son-accuses-whitehall-of-marginalising-jet-en/
J

Good morning all, I don't know if I can post this here so if we need to do another post elsewhere just let me know. I started to model the G. Pioneer fuselage on Fusion360. I went a little too fast, the fuselage is not round but slightly oval. And then I haven't forgotten the cuts. I'll fix that and keep posting on the G.Pioneer. Thanks for reading me. 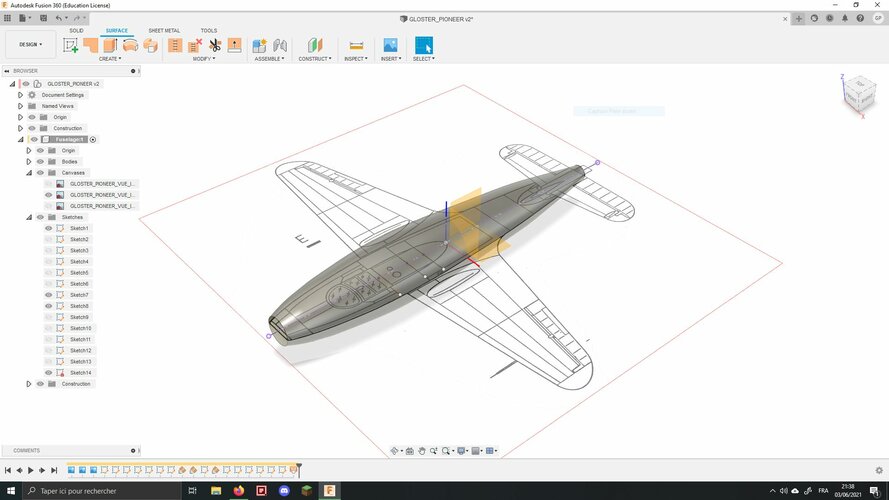 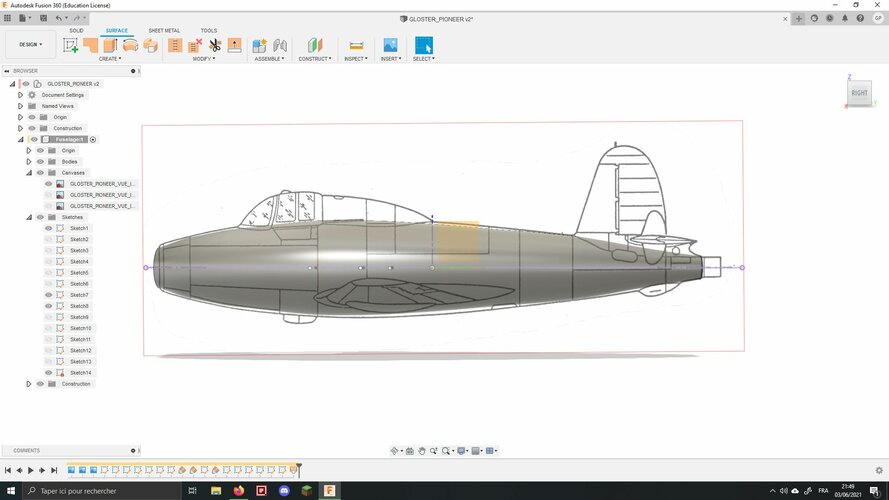