U.S. Air Force testers say the Global Hawk Block 20/30 unmanned aerial system (UAS) is unable to completely and reliably perform the high-altitude imagery and signals intelligence collection missions for which it is designed.

Eichorn acknowledges this is an unusual finding. Typically, systems are considered effective or not effective. “I was much more comfortable with the shade of gray in this case rather than the black and white of is it effective or not,” he tells Aviation Week in a June 3 interview. “This provides a valuable service to our nation, and to the allies … I felt more comfortable calling it effective because it does do some things well. But it has got a ways to go to being all that we want it to be.”

Of note during the three months of testing last fall at Beale AFB, Calif., (the first Global Hawk home base), was poor sortie turnaround performance.

Effective time on station (ETOS), or the amount of time the aircraft can loiter over a target gathering intelligence, was expected to be 55%, but the system achieved only 27%. Part of that was owing to an electrical generator issue. Action by the program office and contractor Northrop Grumman to fix this problem was “impressive,” Eichorn says.

Another factor contributing to poor ETOS performance was low-tech, but crippling. “Nut plates,” or panels on the aircraft, were breaking when maintainers opened and closed them. Fixes require a 24-hr. curing time, Eichorn says, effectively keeping an aircraft on the ground for a day without operations. He likens this requirement to airline operations; the airlines lose money if a jet is grounded. Spares availability also was a problem, an issue often heard with young systems.

Also problematic during the IOT&E period was performance by the two sensor payloads, the Raytheon Enhanced Integrated Sensor Suite (EISS) and Northrop Grumman Airborne Signals Intelligence Payload (ASIP). In both cases the sensors performed well at close range, but the imagery is “not so good” at longer distances once the slant range of the sensor begins to degrade, Eichorn says. The general notes that SAR performance was good, if the aircraft is close to its target.

Likewise, performance of the sensors has been good during actual operations, Eichorn notes. Two examples are the images of Japan’s failing nuclear power plant collected by Global Hawk after the recent earthquake there. Also, the system provided images of targets in Libya—both areas with permissive operations. Eichorn explains that Global Hawk was not designed to penetrate deep into hostile airspace.

However, slant ranges are important for standoff intelligence collectors. The U-2, for example, is credited with having good slant range performance, allowing it to peer behind borders at targets. Eichorn declined to provide actual ranges for the Global Hawk’s performance owing to security concerns.

The report’s findings appear damning to a program that has had its share of struggles, twice breaching Nunn-McCurdy cost-growth caps. But while Global Hawk has faced a stiff headwind in Washington on cost and now with its testing findings, the system has support in the field. This juxtaposition is reminiscent of the Predator UAS, made by rival General Atomics, for which testers issued an equally scathing performance report. However, that system—as well as the larger Reaper and Gray Eagle versions—are hailed by field commanders as successful.

Northrop Grumman's response to the report.

Looks like the current US administration is trying to sell South Korea the proverbial 'pig in the poke'. [shakes head]

Grey Havoc said:
Looks like the current US administration is trying to sell South Korea the proverbial 'pig in the poke'. [shakes head]
Click to expand...

Maybe they should by a Global Hawk equivalent from someone else. Oh wait, there isn't one. :

Global Hawk Block 40: Too Late to the Ball? (Ares blog)

A final deal hasn't yet been hashed out on the fate of the Global Hawk Block 30 after a year of wrangling within the government, and the Air Force seems to have added a second front to the Northrop Grumman's war to save the high-flying unmanned air system from the boneyard.

It simply comes down to money, and to bang for the buck, according to multiple defense sources. And, it seems the service has soured on once high hopes for the Global Hawk to deliver what it thought would be a reasonable price for collecting images, signals intelligence and radar data from 50,000 ft. over the earth or higher.

Senior Air Force leaders are expected to propose terminating the Global Hawk Block 40 in the forthcoming Fiscal 2014 budget build as a way to pay higher priority bills. This would leave the service with only six Block 20s, four of which are outfitted with the Battlefield Airborne Communications Node relay system and two smaller Block 10s at service museums.

Despite the likelihood of putting the program in the gallows, the Air Force's program office is proceeding with business as usual and preparing for an operational utility evaluation to assess the Block 40's readiness for an early deployment to support operations in U.S. Central Command, possibly as soon as this spring.
Click to expand...

Interesting timing of this then:

From:NewsComAu
February 22, 2013
AUSTRALIA is set to sign up for $2 billion worth of unmanned spy planes able to detect small, wooden people-smuggling boats.

Finding a small wooden boat in lots of water with no air threat is not exactly the same as a future USAF recce mission. It may also take a little more horsepower in the radar than the genny on a Predator B will support.

LowObservable said:
Finding a small wooden boat in lots of water with no air threat is not exactly the same as a future USAF recce mission.
Click to expand...

USN rather than USAF, but definitely a current and future mission. The MQ-4C Tritons are meant to pick up a significant part of the sea-surveillance role of the P-3C as they go away and the USN doesn't buy enough P-8 Poseidon's to provide the same degree of coverage.

Among doubts about the reliability and safety, problems with the release of technical data, that would have been
essenstial for gaining approval for Euro Hawks use in the European airspace, are said to be the main reason. :-\


Jemiba said:
Among doubts about the reliability and safety, problems with the release of technical data, that would have been
essenstial for gaining approval for Euro Hawks use in the European airspace, are said to be the main reason. :-\
Click to expand...

That's sort of detrimental to any cooperative effort.

“Germany has not notified us formally they have canceled, terminated or any way slowed down the program,” Tom Vice, Northrop’s president of Aerospace Systems, said Wednesday. “We have received no formal feedback and we’re disappointed in what we’re seeing in the press, but we can’t speculate on any of that until we have formal discussions with the Germans.”
Click to expand...

From the same piece, Cassidian's CEO:

“This experience shows how important it is to have full access to technology and information of a system. This also applies to future procurements. Only when certification standards are taken into account during the development of a flight system can future lengthy and costly post-certification be avoided.”
Click to expand...

Strangely it was announced in the media, that the problems with the certification of the Euro Hawk
for the civil European airspace were well known for years by the German ministry for defence and
that more than just one warning was given quite a long time ago. It was stated several times, that for
military airacraft the responsibility lies with military aviation authorities. Maybe the EASA was unknown
to the persons in charge ? Quite probably this affair will have a parlamentary sequel, but that surely is
nothing the culprits really have to be afraid of, I think.

As outlined in the 2013 Defence White Paper (the White Paper), the Government intends to replace the AP-3C fleet with P-8A Poseidon aircraft, complemented by unmanned aircraft capable of undertaking broad area maritime surveillance and fleet overwatch.

The goal is to provide long-range, long-endurance maritime surveillance and response and an effective anti-submarine and anti-surface warfare capability.

The acquisition of high-altitude, long-endurance unmanned aircraft for maritime patrol and other surveillance is being developed under project AIR 7000 Phase 1B.

One of the options being considered for AIR 7000 Phase 1B is the United States Navy MQ-4C Triton Broad Area Maritime Surveillance Unmanned Aircraft System produced by Northrop Grumman.

The MQ-4C Triton is a developmental variant of the Global Hawk surveillance aircraft which is being specifically developed for maritime surveillance roles.

To help assess the suitability of the Triton for Australia’s requirements, the Government will establish a Foreign Military Sales Technical Services Case with the United States Navy to obtain detailed cost, capability and availability information to inform future Government consideration of Project AIR 7000 Phase 1B.

The release of a Letter of Request for the FMS Technical Services Case does not commit Australia to the acquisition of the MQ-4C Triton.

Defence will continue to investigate options for a mixed manned and unmanned aircraft fleet to inform Government consideration later in the decade.

As also outlined in the 2013 Defence White Paper, Defence will analyse the value of further investment in unmanned aircraft for focused area, overland intelligence, surveillance and reconnaissance, including for use in border security operations.

This will include the potential expansion of the role of these assets in the ADF to include interdiction and close air support, subject to policy development and Government consideration.

The reasons for the cancellation by the German Airforce are politically/financially ones. Adding the ability
to fly in civil airspace certainly isn't impossible, it's just expensive. Why it was missed in the calculation from
the start ... who knows ? The EuroHawk GmbH is a joint venture by Northrop Grumman and Cassidian, the military
branch of EADS. And the latter one already has enough experiences how to squeeze money out of the state !
But with the imminent federal election, it's easier and better for the image to axe this program, it will appear to
a lot of people as consequent acting and cutting military expenditures always is advantageous for the image of
a German politician.
(translation of the cartoon text: "Well then ? What we shall do now with all those Euros we skimped on schools and
universities", from http://www.stuttmann-karikaturen.de/archiv2.php )


Interesting that the USAF/DOD seem to be trying to 'square the circle' here.

They're still trying to reactivate the Euro Hawk, as well as trying to revitalise USAF Global Hawk procurement:

A bit of a reprieve for the Global Hawk: 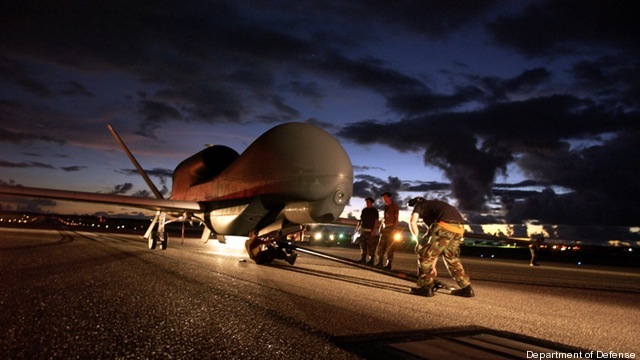 The HASC tactical air and land forces subcommittee wants the Air Force to explain "how ABMS intends to transition demonstrated capabilities into sustainable Programs of Record."