Yes, that Norman Bel Geddes. The yacht mentioned in the reddit post is the Wenner-Gren Yacht design of 1934, with a both a naval yacht and a naval patrol vessel derived from it proposed for the United States Navy in 1939 at the outset of WWII (see JaySea article). 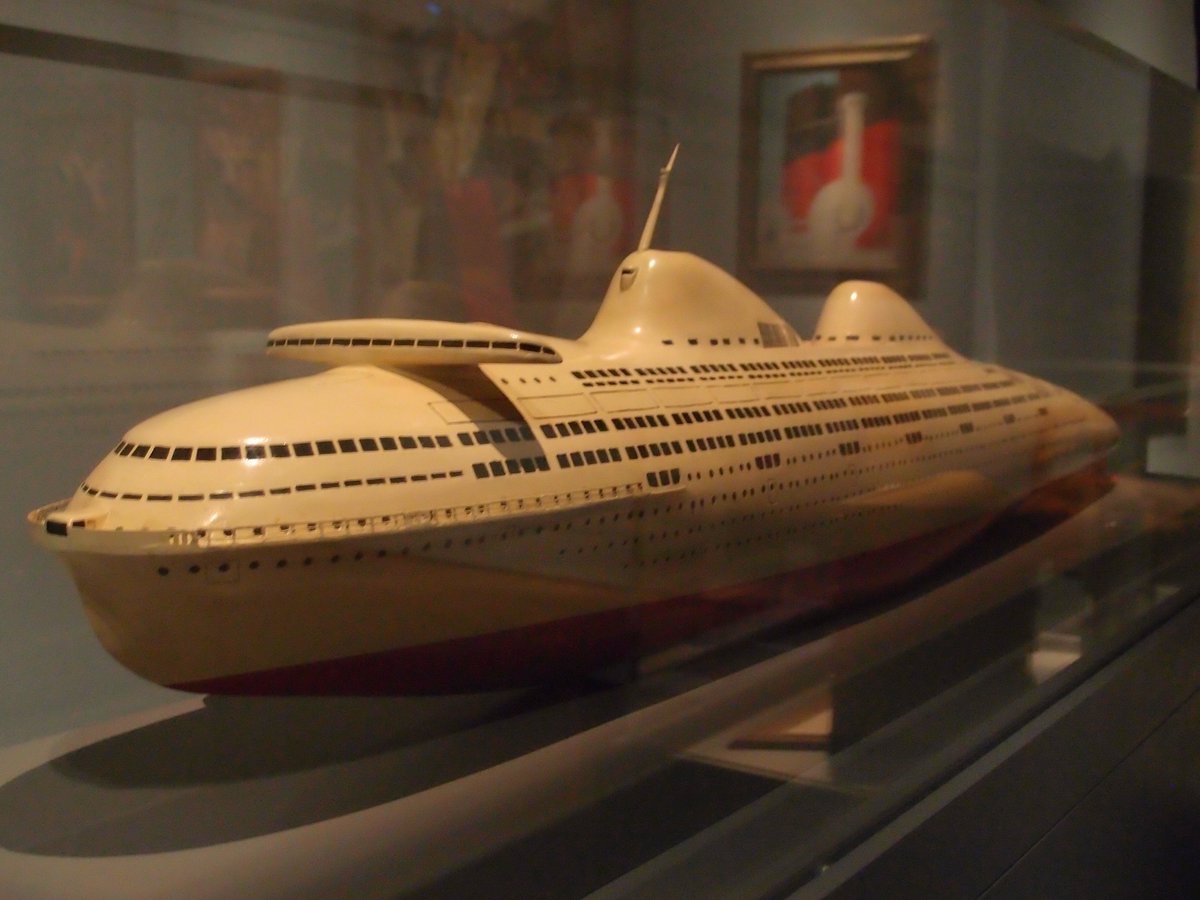 Dreams of a Future Past: the Geddes Ocean Liner & Yacht

An Ambitious Design This blog post is another diversion from the typical fare of JaySea Archaeology blog. Outside of the blog posts that discuss maritime pseudoarchaeology, most of the ships covere… 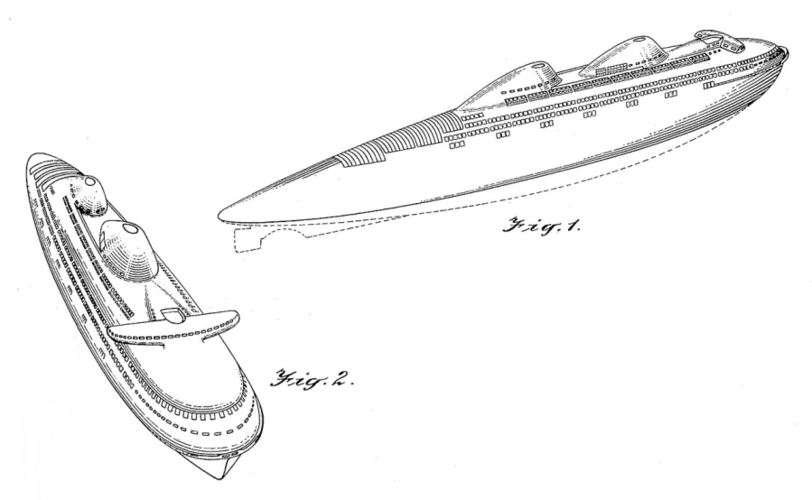 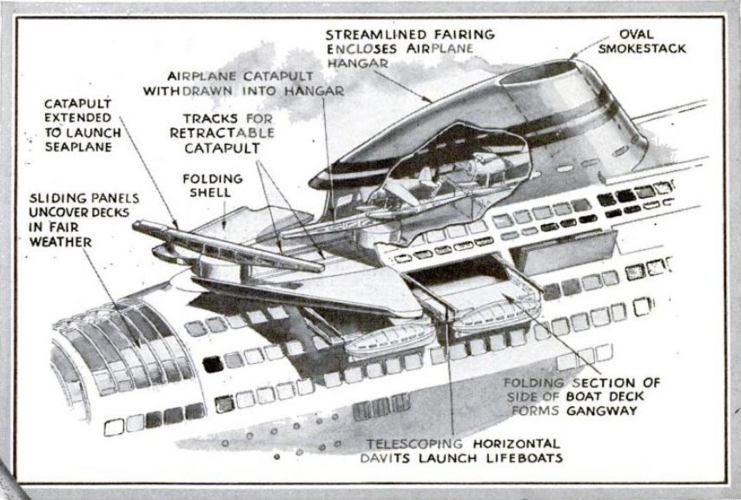 The stacks are oval in shape and each is multi-purpose than just engine exhaust. The first forward stack also contains a café with a dance floor, orchestra, and bar. The mast was blended into the structure of the first stack and allowed access to an enclosed lookout platform. The second and aft stack was to contain a hangar and machine shop for two tri-motored seaplanes. The after part of the stack containing the hangar was to fold open and extend out as a platform with a launch catapult for launching the aircraft. No provision was made for returning the planes to their hangar from the water though most likely they would be loaded aboard onshore.

Placing aircraft aboard ships and launching them was a relatively new concept and very much in vogue when the Whale was designed in 1932. The first aircraft to launch and land on a US ship was aboard the USS Pennsylvania on 18 January 1911, the first US aircraft carrier was converted and recommissioned only a decade prior and the first pair of US purpose-built aircraft carriers were launched and commissioned just five years prior to the Whale being designed. The difference is those are naval vessels, but why put seaplanes on a cruise liner? A few years prior to the Whale Liner the famous German shipping line Norddeutscher Lloyd had successfully implemented seaplanes aboard their passenger ships first with the Lutzow in 1927 but that was only to provide rides for their passengers.

In 1928 Norddeutscher Lloyd launched two next-generation ocean liners the SS Bremen and the SS Europa each equipped with a seaplane catapult specially designed by German aircraft manufacturer Heinkel. Each vessel had a specially designed seaplane the Heinkel He-12, which had a more practical use, cutting transit time for international mail. The first launch and flight of these planes were on 22 July 1929 launched from the Bremen 250 miles away from New York City. This set a record for international mail with mail from Berlin to New York being delivered in just six and a half days. On the return trip on 1 August, the small plane arrived in Bremerhaven transferring mail to another plane to Berlin. This time the turnaround of mail from New York to Germany was just five and a half days. Norddeutscher Lloyd had to have additional onboard support crew for these planes in addition to the conventional ship crew. With this very recent cutting edge development of ocean liner based aircraft, it was incorporated into Geddes design for the Whale. Geddes predicted that liner based seaplanes for delivering mail were going to become the standard when in reality only the Bremen and Europa ever carried seaplanes and even then only in service pre-WW2. It was an additional forward-thinking feature of the Whale’s futuristic design. One of the resources I had utilized while researching this blog post was the Harry Ransom Center which is the final repository of Norman Bel Geddes’ work. Inside the files relating to the Whale, there were photographs and deck plans of the SS Bremen which suggests that Geddes was certainly taking design cues from what was the most modern ocean liner of the time.
Click to expand...

On a whimsical side note, I wonder if it had been built and then called up as a troopship, what would it's prefix have been, WSA or USS? For example, WSA Whale or USS Whale?

ORIGINAL CAPTION: The model of the Whale. Note this model has four propellers.
Last edited: Apr 21, 2021

I wonder how such a teardrop shape affects the hydrodynamic properties of the hull?
G

Hi to all. The image below is from the 1938 comedy "The Big Broadcast". It is about a race between two Trans-Atlantic vessels of which the one below, the Gigantic, is most certainly influenced by the Bel Geddes design. 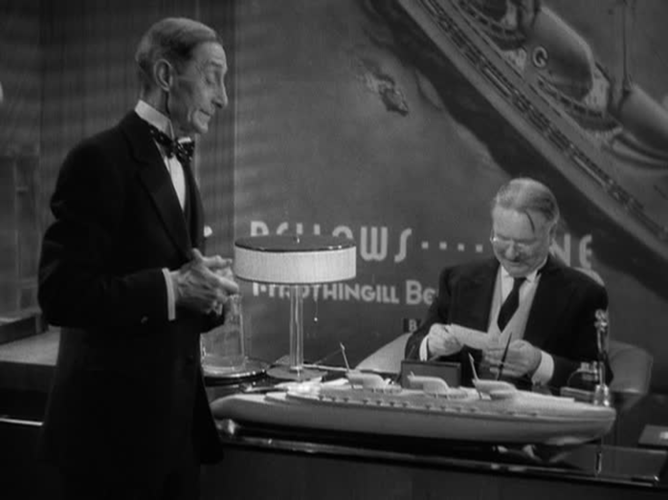 Here is the full film on YouTube in glorious 480p

A post about the 'Big Broadcast of 1938' at the Model Ships in the Cinema blog, if you go searching through that there are one or two other fictional ocean liners in there.

Model Ships In The Cinema: The Big Broadcast of 1938
R

Cool! There were several proposals along the Bel Geddes lines from the 30s through the 50s. None came to fruition, and the post war great liners all looked conventional, although somewhat cleaned up compared to the prewar liners. I don't know, but I would guess that construction costs would double at least to go from a 30 kt ship to a 50 kt ship, with fuel costs doubling at least. Jet airliners were in the works since 1944, and the liner companies probably realized airplanes would only get bigger and faster. Once aircraft got quieter and more comfortable (remember then, coach was more like modern business or first class) competing on speed was a mug's game. Unfortunate, they did look cool.
N

gusmobile said:
Hi to all. The image below is from the 1938 comedy "The Big Broadcast". It is about a race between two Trans-Atlantic vessels of which the one below, the Gigantic, is most certainly influenced by the Bel Geddes design.

Have this on DVD. Odd film, but great seeing the ocean liner Geddes designed in action.
P

I don’t know about rolling, but that would seem to let freak waves wash over it as opposed to today’s ugly slab-sided monstrosities that are sure to shatter inward. I’d just be happy if the SS United States were revived.

I'm not the expert (@RP1 ?) but I feel like that very shallow forefoot (the submerged part aft of where the stem meets the waterline) is going to create some nasty slamming behavior in heavy seas.
R

I'm not the expert (@RP1 ?) but I feel like that very shallow forefoot (the submerged part aft of where the stem meets the waterline) is going to create some nasty slamming behavior in heavy seas.
Click to expand...

Yeah, I'd expect nasty slamming, and some generally interesting pitch behaviour with so much volume forward. Maybe not mass (based on the era, I'm assuming heavy steam machinery), but you'd still see a lot more reserve buoyancy at the bow than the stern. Challenging for damage stability, too - they wouldn't approach it then the same way we would today, but the lack of buoyant volume aft would require much tighter subdivision. Handling would also be unusual, I expect, because the centre of pressure for wind forces is likely to be well ahead of the centre of hydrodynamic forces.
P

Now I have seen future Russian icebreaker models and other working ships with high rounded off bows and no real "deck" above-all nose. That would seem safer to me.

publiusr said:
Now I have seen future Russian icebreaker models and other working ships with high rounded off bows and no real "deck" above-all nose. That would seem safer to me.
Click to expand...