On Sunday I spent three hours at the Paul Garber facility in Silver Hill, MD. For those who don't know, it's where the Smithsonian keeps all the planes and space artifacts not on display or in unrestored condition. Obviously i took a bunch of pictures and wanted to share them, and ask for some identification help.

First picture is of a wooden prop. Looks like something that belongs in a YO-3 or rather a QT-2. I asked the docent, he confirmed it was from a quiet aircraft, but he said it predated QT-2...Any ideas?

Second picture is the restoration of the He-219 wing. The fuselage and nacelles are already waiting for it at the Udvar Hazy museum.

Third picture is from one of the hangars they showed me. It's full to the brim with aero engines. The shelves each can contain 4 large engines, more of the smaller variety. There must have been some 200 engines, ranging from one-offs to Conquerors, DB-601s, V-1710s, and obscure japanese ones. The docent says they have about as many engines as the rest of the world's collections combined. I believe him.

Next picture is a bit of trivia. name the airplane this bare aluminum part belongs to.

Then there is a picture of one of the two Kika airframes they have in storage (as well as engines). there is talk of making a full airplane out of the two.

Last picture is of a set of wings I was not able to identify (white wings with strangely thin nacelles). the planform is straight rectangular, untapered. I estimate it's about 6-7 meters span. It must be for a high wing aircraft, I could see no sign of landing gear attachments. i am puzzled by those nacelles. Any ideas?

I could not not take pictures of the Horten flying wing. One picture shows some damage, which gives insight in the internal construction and materials.

My first thought on those wings was a Twin Otter but now I'm not sure as the engines look like they're too close to the wing tips to be a Twin Otter.
I

Is the fifth (trivia) picture the remote-controlled tail turret of a Ju-388?

Yeah, i thought about the twin otter, but I think this is smaller...however I think it must share the overall configuration, but I could be mistaken.

regarding the rotating structure, Iverson is correct! It's the tail turret of the 388. As a reward you get a frontal shot of the 388 next to the collection's Me-410.
I have to apologize for the sub-optimal angles from which i took the photos. All the airplanes are litterally crammed one next to the other and it's hard to get a good complete view.

I just had another thought. Could those wings be from one of the COIN prototypes? Didn't the early OV-10s have a shorter wingspan?

I had the same thought. Looks like a slow but high-lift wing, and with two props you can get STOL out of it. But other than the OV-10 and the Model 48 charger, no LARA contender was built...and i don't think Garber would get a mockup.
Yeah, the OV-10 were supposed to have a 20' wingspan in order to takeoff from dirt roads, but that was dropped early in the life of the program.

By the way, is there any other explanation for the two structures I have been callling engine nacelles? they look awfully thin, IIRC they were little over a foot tall. What engine is that small?

If we can't positively ID this, i'll try pinging the docent, but even that does not guarantee we'll find out.

I got in touch with one of the curators. Turns out the wing I was trying to identify belongs to the VZ-2. The small dimensions of the nacelles derives from the fact that there is no engine mounted there, as the props were shaft-driven from the fuselage.
M

I went to school at George Washington University there in DC and lived in the DC area for a few years after that. Hitting up the NASM was a favorite pastime of mine. For one thing, it was free. For another, I could (and did) drop by there just to reset my watch to the relay display of the US Naval Observatory's Atomic Clock.

I did manage to get out to the Garber a couple of times and that was truly a place where dreams were stored. On my first trip, I went with a friend of mine, Paul Anderson, who was a pilot. He's the one who noted the dream aspect of that place. The NASM down on the Mall is a wonderful place but it's there in the crowded shed of the Garber facility that you really get the sense of that intense dream of flight that took the form of all that aviation hardware piled about.

During my second trip out there our little tour group was brought by the Enola Gay which was still in the midst of being restored. She was up on a workframe and was in pieces. We got to poke our heads up into the bomb bay. We were also admonished not to touch the aircraft itself due to the oils and salts present in our skin and the ultimate effect it would have on the metals.

I have to say though, that I lingered to let the tour move on and then quickly reached out and put hand on the machine. Just below the mission markings.

Some day soon I'm going out to the Hazy and spend days just drinking that place in.

Madoc said:
Some day soon I'm going out to the Hazy and spend days just drinking that place in.
Click to expand...

You will not regret it. I went there with a partially full 512Mb SD card in my camera (which I would later lose on the flight back to Europe ) and that filled up completely in no time flat. Desperately I looked through all the pictures on the memory card, ruthlessly deleting anything worthless, but since I usually get rid of such immediately it was hopeless and I had to buy a new 1Gb card No way was I going to accept not having photos of all the stuff I had not captured yet!

Word of warning though, the last shuttle bus transfer back to Dulles airport departs the instant the museum officially closes, not realising that I went for a comfort break before leaving the building and ended up having to call a taxi.

Another important step in finishing the Museum’s He 219 Uhu (Owl) night fighter has been completed. Recently, the wing was painted and transported to the Steven F. Udvar-Hazy Center in Chantilly, Virginia, for the aircraft’s final assembly. [...]The wing was transported to the Udvar-Hazy Center, and was on view during our recent Open House, but no date has been set for the final assembly of He 219. Before this can happen some major issues have to be resolved—among others, the installation of the He 219’s main landing gear and the reverse-engineering of the aircraft’s antennas, which were lost after the aircraft arrived in the U.S.
Click to expand...

Here is a shot of the He-219 from this past Sunday.

The original query was a looong way back ... but I was surprised that no-one has mentioned that 5-bladed propeller. For those who don't know, this was a NACA-designed propeller fitted to Stinson L-5E Sentinel (44-17939/'LD 939') in 1947.

NACA was investigating the potential for quieter light aircraft at the urging of the CAA, Aircraft Industries Association, and the Aircraft Owners and Pilots Association. The object was to produce light aircraft designs which could operate from more conveniently-located airfields (ie: in densely-populated areas).

A large muffler was also installed - exhausting upwards near the fin. With the reduced propeller tip-speed and engine muffling, noise was reduced from a standard 90 decibels down to 66 decibels. The test were considered successful but such a great degree of noise-reduction was judged unnecessary. 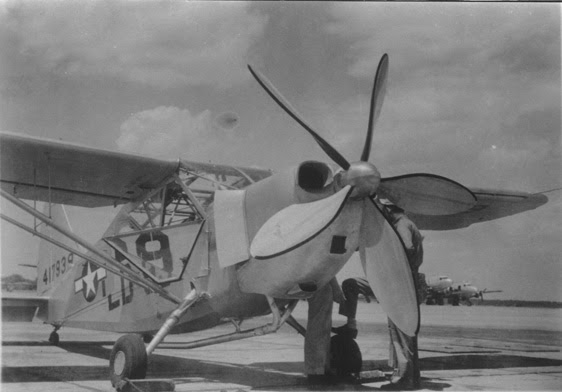 In 1947 NACA (now NASA) funded the development of a quiet airplane. Using a Stinson L-5E airframe, a 96 inch, 5 bladed wooden prop with wid...