It has a complete history of Flight Refuelling Limited's projects and developments. A couple of these have been briefly mentioned elsewhere but I thought a dedicated thread would be useful.

Stirling Receiver
In 1938 the Air Ministry requested studies into flight refuelling for bombers and what effects there would be on performance and payload. In April 1939 a study was drawn up for a reciever conversion of the Short Stirling. Basically the changes were a reception coupling beneath the rear turret, the fuel line then being carried upwards inside the fuselage along the centreline of the roof heading to the inner collector boxes. An hydraulic pump on the starboard outer engine would drive a winch mounted just ahead of the tailplane inside the fuselage. Above this was the operators station. Although the study showed benefits no physical conversion or trials ever took place.

DH.91 Albatross Tanker
A further study was made into converting the DH.91 into a tanker. 1,232 Imp Gallons of fuel were carried in four tanks mounted in the cabin admidships which were interconnected. Ahead of the tanks on the centreline was the hose drum and ahead of that was the hose drum winch which was manually operated with a hose guide beneath it. In the rear fuselage was the contact reel and line-throwing gun firing out of a slot to port. The date on the plans for the Stirling and Albatross projects is 15/5/1939. Eventually this technology resulted in the B-17 receiver and B-24 tanker tested in the USA from April 1943. Plans to build a fleet of these faltered due to the length of time needed for conversions and crew training and the eventual appearance of the B-29.

Lancaster Tanker
At the end of 1943 plans were drawn up for a force to bomb Japan from bases in Burma and in early 1944 it was planned to use the Lancaster as recievers and tankers. The looped system was again used and modified S.30 Empire receiver gear would be used, presumably very similar to the Strirling prokect of 1939.
Three tanker proposals were drawn up for the Lancaster during January 1944. The first proposal had the hose drum and winch fitted at the forward end of the bomb bay, fuel being supplied from No.1 port and starboard wing tanks and two 640 Imp Gallon tanks fitted in the bomb bay. The line throwing gun was mounted in the rear fuselage beneath the dorsal turret on the port side. The contact cable ran externally from the gun to the winch in the forward part of the bomb bay. The second proposal moved the contact gun to the roof of the forward section of the bomb bay which made things much simpler. The third proposal was revolutionary in that the hose drum was mounted at the aft end of the bomb bay along with the contact winch and gun and the tanks were moved forward. It was the first time Flight Refuelling had put the hose drum at the rear of the aircraft. The third proposal was accepted and fifty sets of tanker and receiver equipment ordered for the Tiger Force. By Novmber 1944 the prototype tanker and receiver had flown but by then the war had moved on and nearer land bases to Japan were available.

Not as complete as I would have hoped. FRL established a design department in 1938 under Marcus Langley and subsequently employed Hessel Tiltman as a consultant, so they were not short of capability. Assuming that the FR project numbering system commenced at 1 then this book omits FR1 to FR9. FR5 and 7 are shown in In Cobham's Company by Colin Cruddas and FR8 was described in Flight in April 1939. I posted FR9 here.

Actually these were published between August and November 1945 but worked on before, so they can be considered wartime projects. Flight Refuelling Ltd is the well known company that pioneered inflight refuelling and proposed its use for civilian transport. In 1945 FR designed three long-range...

www.secretprojects.co.uk
I suggest that FR1 to 4, which most probably predate the arrival of Langley, could have covered the various modifications to the Harrow and Empire boats, which leaves FR6, a 1938 project, as an unknown at this point. On the other hand three GA drawings in Langley's 1939 report Refuelling in Flight could be either the 'missing' projects or simply indicative illustrations , however as copies of this are currently offered at silly prices I cannot be sure.
Last edited: May 16, 2019 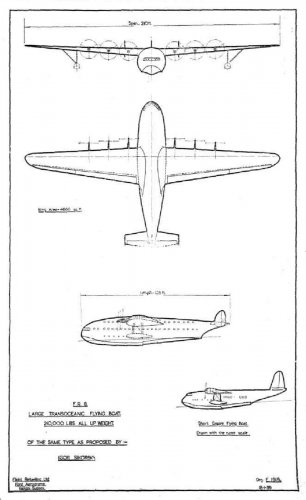 Illustrations from a 1938 Flight Refuelling Ltd report titled Refuelling in Flight by Marcus Langley assisted by Alfred Hessel Tiltman
Fig 1) Typical Air Liner for Refuelling in Flight
Fig 8) Diagram of Flying Boat
Fig 13) Hypothetical Naval Reconnaisance Aircraft
These may or may not be projects in the range FR1 to FR4
The report is for sale on ebay for £300, if anyone is crazy enough to believe that it what it is worth. 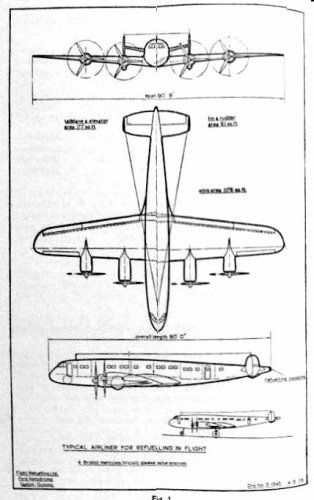 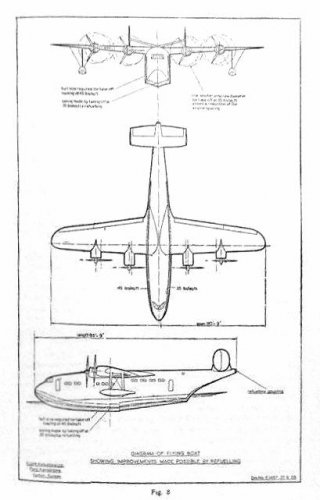 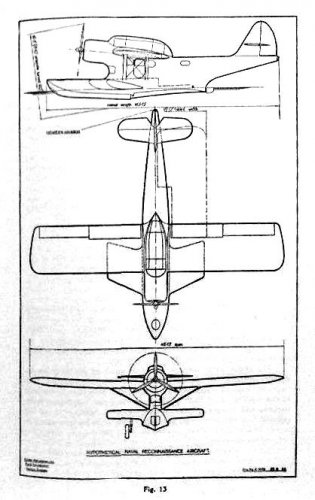 By the way, the FR8 was Flight Refuelling Ltd's re-interpretation of a flying boat described by Sikorsky in a lecture in Oct 1938. It is pretty clear that the aircraft he was describing was the S-45 project, which can be found here.

www.secretprojects.co.uk
Note that in the first post on that thread Hesham has shown the FR8 project GA drawing, which explains why in later posts there were questions asked about why the drawing and model were different.
E

Just to expand a little on the initial post, these are notes I made from the same book ;

There is a recently published book “History of Air-to-Air Refuelling” (which isn’t what it says, but is really a TECHNICAL history of Flight Refuelling Limited).

Here is a summary of what it says about the Tiger Force Lancasters and flight refuelling (there are pages and pages of technical drawings and explanations showing how the system worked) from pages 24 to 34.

In 1942 the US Army Air Corps placed an order for a set of tanker and receiver equipment for a B-24 tanker and B-17 receiver aircraft. These conversions were complete and flight trials commenced in April 1943. The B-17’s range being “increased to 5,800 miles with full bomb load”. It was planned to take off from the Aleutians and land in China. These plans seem to have come to naught because of the time required to convert the aircraft and train crews and the coming of the B-29.

In the “latter part of 1943” there were plans made for the RAF to bomb Japan from bases in Burma. By 1944 it was decided that these were to be Lancasters equipped with the pre-war looped hose system (as were the B-17 and B-24). In January 1944 three different designs had been prepared, the third of which was adopted. In this the hose-drum and equipment was placed towards the front of the aircraft and the fuel supply consisted of two 640 imperial gallon (2,880 litres) tanks in the bomb bay.

50 sets of equipment were ordered for development and training. It was then intended to convert a total of 500 tanker and receiver aircraft to mount the long-range operations.

Originally the force was to be called “The Long-Ranged Force”

The prototype tanker (PB.972) and receiver (ND.648) aircraft had both been successfully flown by November 1944.

Not only were the two bomb bay tanks available, but also the Port and Starboard Inboard wing tanks (580 gallons [2,880 litres] in each)

The average fuel transfer rate was “better than100 imperial gallons (450 litres) per minute”.

“The trials for the Tiger Force operation were carried out with the prototype Lancaster tanker PB.972 and receiver ND.648, using the equipment described, and it proved that refuelling could be carried out at an indicated airspeed of 160 mph at any reasonable altitude, over or in cloud and at night, there being no difficulty in illuminating the receiver’s hauling cable.

Then, due to ”progress made in the Pacific Theatre” the whole programme of the Tiger Force was cancelled.

The book later (page 39) states that post war that it supplied the US with sufficient equipment to convert 92 KB-29M aircraft to tankers and seventy-four B-29s and fifty-seven B-50As to receivers and implies that the 43rd Air Refuelling Squadron used this equipment in achieving their air-refuelled non-stop around-the-world flight between 26th February and 2nd March 1948 (???)

The first 39 pages, and a few later pages, can be read on Google books here:

This is a unique account of the development and operational use of air-to-air flight refuelling since its early beginnings in the USA and the UK to the equipment that is in use today. The author draws upon his life-long career as senior design engineer with the successful British company...
books.google.co.uk

Schneiderman said:
The first 39 pages, and a few later pages, can be read on Google books here:

This is a unique account of the development and operational use of air-to-air flight refuelling since its early beginnings in the USA and the UK to the equipment that is in use today. The author draws upon his life-long career as senior design engineer with the successful British company...
books.google.co.uk
Click to expand...