While digging through some USAAF R&D files at NARA last week, I found an intriguing report about what appears to have been the first instance of a guided air-to-air missile shooting down another aircraft. The USAAF was considering the idea of a "high speed ramming aircraft" to shoot down bombers. As a proof of principle, a PQ-12A target drone was fitted with a 500 lb warhead. It was radio-command guided by an accompanying UC-98 Bobcat utility aircraft. The target was a PQ-8 target drone. During the trials in 1943 (no date specified in the report), the UC-98 flew the PQ-12A towards the target and then detonated the warhead by remote control once the two aircraft were near each other. Although this proved the concept, the target drones were too slow for actual combat use. This was the forerunner for the JB-3 Tiamat AAM program.
A

The AAF converted two PQ-12A for guided missile tests. Besides the one used for the AAM test, another was configured with a camera as a demonstration of a TV guided "controlled powered bomb as a follow-on to the General Motors AT-1 aerial torpedo and the subsequent Castor conversions. Here's a photo of one of the PQ-12A with some normal PQ-12 in the background. 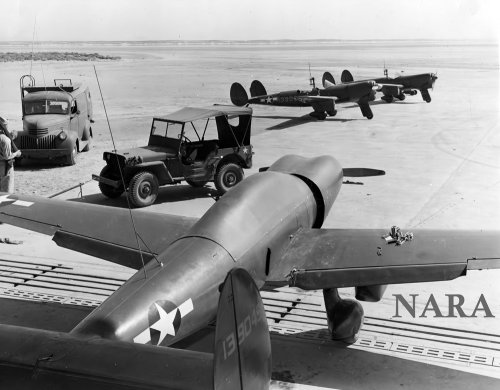