This was intended to replace the Perry class on the building slips from 1984 onwards (the last of the latter were planned [pre-Reagan] to be completed by 1982). It was intended as an extremely austere 'ASW only' frigate, originally to be based on the short-hull Perry design but with the half the cost of an FFG-7. In service it would have been operated by the Naval Reserve Force, primarily in 'support of mercantile convoys'. However, someone in the Pentagon got the idea that the Navy could save even more money by basing the design instead on the FTH (Frigate, Training, Helicopter) concept that was being looked at in the second half of the 1970s. In this form, it would have been little more than a towed array tug & helicopter platform. On other forums, it has been compared to the pre-Falklands Type 23 design, but with even less armament and equipment. The Navy seems to have settled on a final design by 1980, but detailed design work was paused in 1981 by the new administration and not resumed, being replaced a year or so later by a new program intended to provide a much more capable FFX for the regular navy as well as the reserve. Unfortunately I haven't been able yet to find any illustrations or drawings of either the originally Perry derived design nor the FTH derived one.

Despite much hard work, this Reagan era FFX in turn was displaced (alongside other programs such as the DDGY) in early 1989 in favour of the 'Battle Force Combatant' (BFC), which had the ambitious aim of replacing all frigates, as well as non-Aegis destroyers and cruisers, with a single multipurpose design. The BFC was part of (indeed arguably the cornerstone) of the 'Revolution at Sea' effort.
P

Very interesting and appreciated thanks Grey Havoc
I've always found it sad that the U.S Navy has never replaced the Perry class!
I'm looking forward to more on this subject!!

In 1984, during the electric drive full scale update effort, NAVSEA initiated exploratory design studies on a 1052-class frigate replacement. Small Water plane Area Twin Hull (SWATH) designs had long been known for exceptional stability in heavy seas. The FFX study carried monohull and SWATH variants, in this case 25 khp/shaft, and dictated that a common baseline machinery plant be used in both platforms. An electric propulsion system which more or less represented a composite of the best features of the near term systems produced under the full scale update was adopted for this purpose.

The SWATH lower hull space limitations dictated use of a high speed ac motor and gear. Subsequent to a series of technology tradeoff studies, propulsion derived ship service (PDSS) was added to form an integrated electric system. Also, a much more stringent acoustic requirement was placed on this propulsion system than had been encountered in any of the previous surface ship electric drive efforts.

The FFX effort was eventually canceled (the combination of requirements resulted in excessively large ship designs), but not before it substantially influenced the technical requirements and procurement specifications for the advanced development of an Integrated Electric Drive (IED) system. The IED contract, which was awarded to General Electric Co. in November,1988, was directed at the 25 khp/shaft SWATH platform complete with acoustic requirements. A single machine was to serve as both generator and high speed, geared motor for the SWATH and as generator for a monohull application., while an option was included for development of a direct drive 50 khp motor as the need arose.

The generator/motor was a four-pole, dual 3-phase, synchronous machine with direct liquidcooled stator and air-cooled rotor. The generator application drove the machine rating of 22.187 MVA at 3600 rpm. The solid state" multi-mode" frequency converter (MMFC) was only rated for single engine cruise condition. At full power the generator and motor could be operated synchronously. The MMFC was a load commutated dc-link converter with SCR based rectifier and inverter bridges. An alternative soft switched pulse width modulated inverter was also designed and partially built, but not completed due to funding and program re-direction. The integrated electric aspect was provided via a PDSS generator system driven from a power-take-off gear.
Click to expand...

On a side note, via HP&CA, an interesting 1981 SNAME paper on problems with the Perry class & potential alternatives to procurement of further units: http://www.sname.org/HigherLogic/System/DownloadDocumentFile.ashx?DocumentFileKey=c7fdc41e-7ca6-4788-a754-6c7901eba1a8

I came across this a year or two ago. I own a copy of "Ships and Aircraft of the U.S. Fleet", the 14th edition (published in 1986) to be exact, and it mentioned something called the "FFX: Advanced Design". It says the following;

"In the mid-1980s the Navy began the design of an advanced frigate (FFX) for construction in the 1990s to replace the Knox and previous frigate classes. That effort, however, was canceled in 1986 by Vice Admiral Joseph Metcalf, the Deputy Chief of Naval Operations (Surface Warfare), because of the large size of those designs.
A smaller frigate (FFX) intended specifically for NRF service was planned by the Carter Administration in the late 1970s, but was not built, nor will the long-gestation surface effect ship frigate (FFGS) be built".

"A low-level Navy design effort to build a multi-purpose frigate for construction in the 1990s was canceled in April of 1986 because of dissatisfaction with the efforts to date. Those efforts had produced preliminary designs of some 7,000 tons for a monohull ship and 9,200 tons for a SWATH (Small Waterplane Area Twin-Hull) design.
The SWATH configuration would have been approximately 300 feet in length, in some version, could accommodate the V-22 tilt-rotor aircraft."

I personally think the Carter-era FFX is a different design from the SWATH/Monohull version, but that is just me speculating. GlobalSecurity has this drawing, depicting the monohull and SWATH variants. Although I am not sure what the origin of these drawings is. Note that massive sonar dome for a planar array.

A friend of mine gave me this excerpt from Friedman's US Destroyer book, pretty much confirming what I had already known, but it goes more in-depth about the actual design: 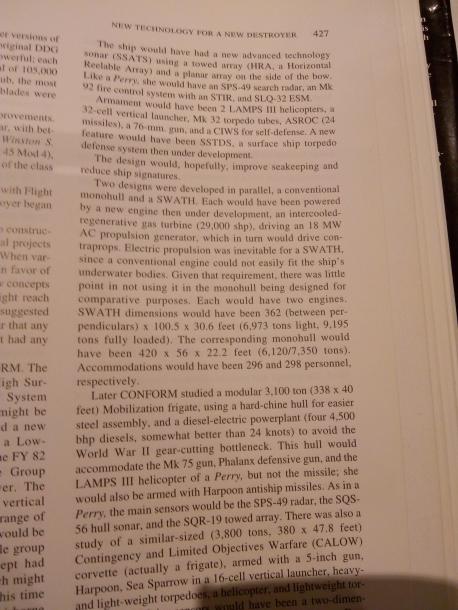 Then another picture says it started out as a towed array barge, and steadily grew in size, again, confirming what we already know. The program was then canceled in favor of the Battle Force Combatant, an ambitious proposal to replace pretty much every escort ship in the fleet. So I guess you can't say the USN didn't try replacing the Perry, it seems they tried and failed multiple times.....
Share:
Facebook Twitter Reddit Pinterest Tumblr WhatsApp Email Share Link