This turned out surprisingly good after I royally screwed up the Variable Geometry mechanism inside my Cat.

Yesterday afternoon, I took out the Kitech F-14D from my stash and started to cut sprues and happyly glued everything in sight. After seeing all the mobile parts turned to plastic goo, I dismantled everything and wondered, "What if...the Tomcat came back to life as a fixed-geometry, forward-swept wing fighter and started anew.

Since it was supposed to be a diversion while the missus is away for the weekend, it had to be a quick build, and I dispensed with the cockpit, which suited me fine, cuz I hate cockpits!, so I resorted to the "black canopy" method.

There I go with the backstory, I have no script so I will improvise:

In 2022, the F/A-35 Lightning II was a matured product, a successful airplane at what it was designed to do, but hopelessly handicapped when confronted with the long saga of Sukhoi Flankers and their descendants. The Allies kept searching for a magic design that would allow them to overcome their type's shortcomings, but the only aircraft capable of doing that with a great advantage was the F/A-22 Raptor, a land-based fighter.

Then, in 2024, a young Aeronautical Engineer, Bud Shasperton proposed the idea of resurrecting the F-14 Tomcat, with "a few modifications" to provide the fleet with a decent, carrier-borne scort fighter/interceptor.

What resulted from all these efforts was something completely different, yet similar in appearance. Enter the F/A-14W.

The -14W retained te same airframe, but had a new fixed, forward-swept wing, actively controlled by a FBL (Fly by light) system. This configuration gave the -14W an extraordinary agility in combat, and excelent handling in all flight regimes.

The wing was entirely based on the previous design, but lacked the Variable-Geometry actuation system, a heavy and bulky device. In its place, Shasperton designed a simple central wing box, with fuel tankage, and two pivots to allow the wing to be folded in the F-14's classic fashion for shipboard stowage.

The engines were derivatives of the F/A-22's but equipped with 3-D nozzles, and the same capability to supercruise.

Thanks to the removal of old technology equipment and systems, the -14W had a greater fuel capacity, and normally, "travelled light" with a regular fuel load, enough to carry every mission demanded from it. When full, and equipped with external tanks, the new Tomcat was capable of reaching impressive ranges. And with the aid of Air refuelling, could be airborne for an eternity.

The adoption of the new wing allowed the installation of six new weapons pylons, which afforded the -14W an impressive weapons load capability, with up to 16 weapons stations plus the enhanced 20 millimeter Vulcan cannon.

With this new weapons carriage capacity, and increased range, it was tempting to use the -14W as an air-to-ground attack fighter. So the modifications to the airplane included that as well.

The -14W achieved tremendous success at the Battle of Australia, when the Sino-Furisian Forces attempted an invasion of the Nation-Continent. And is a very appreciated asset in the Allied fleets. 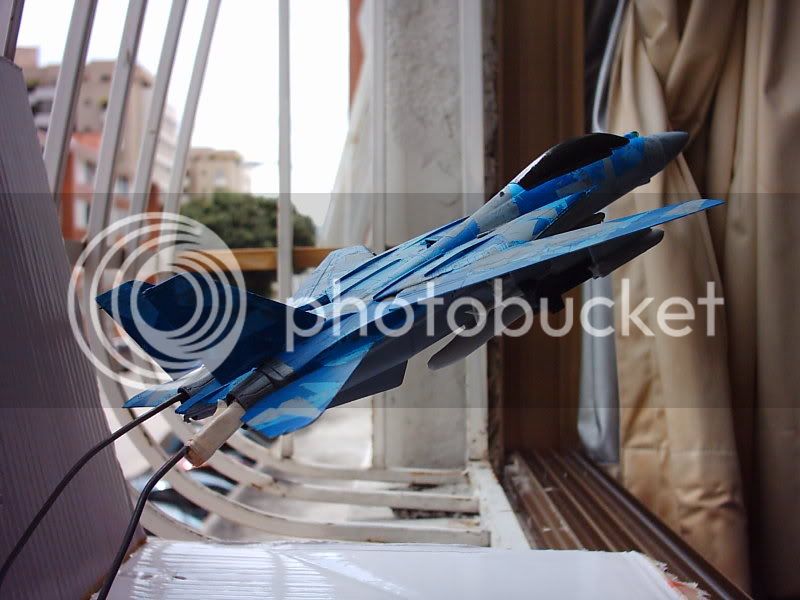 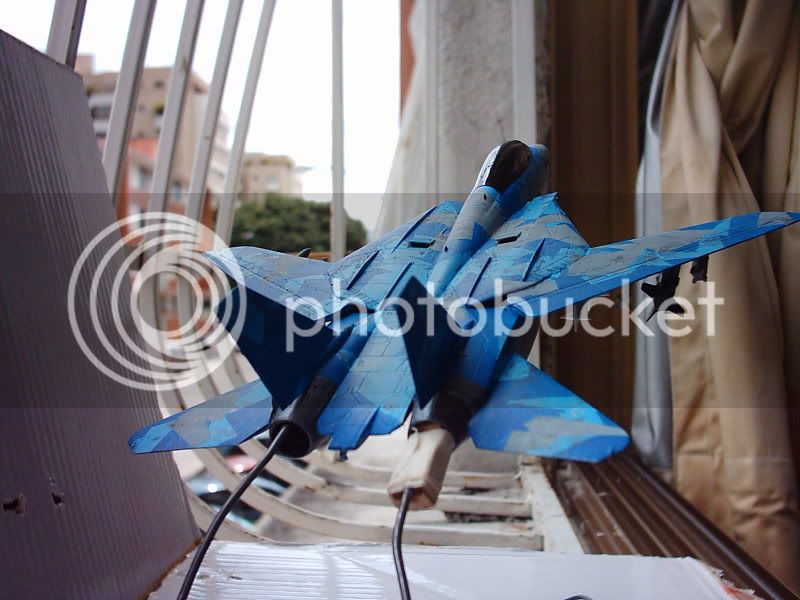 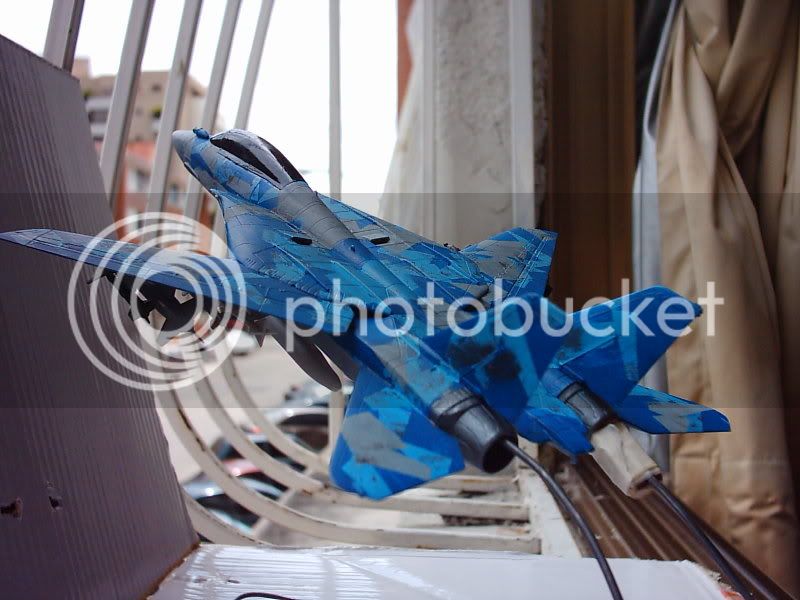 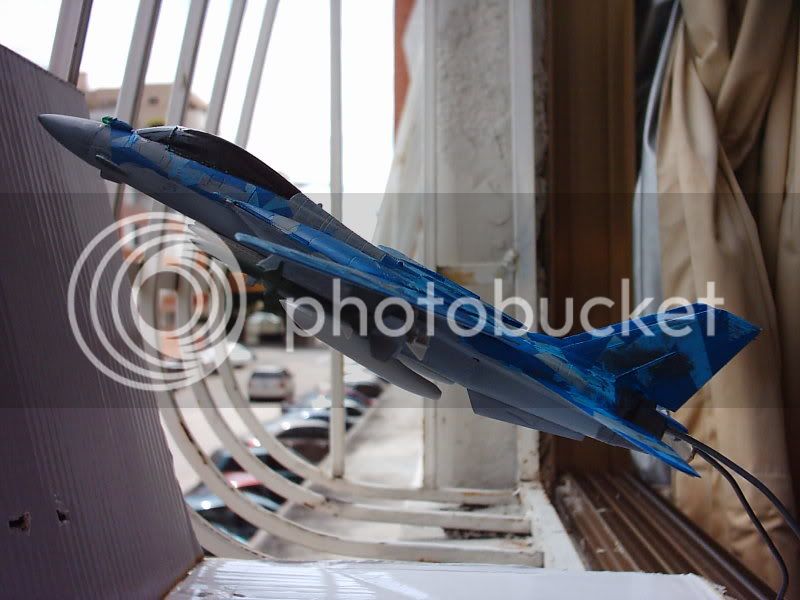 Showing off, note the IRST bulb in front of the canopy 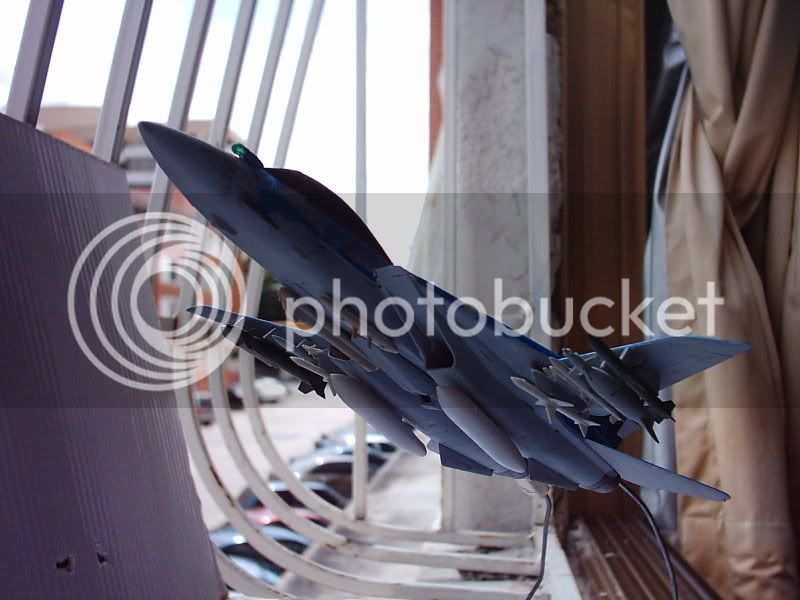 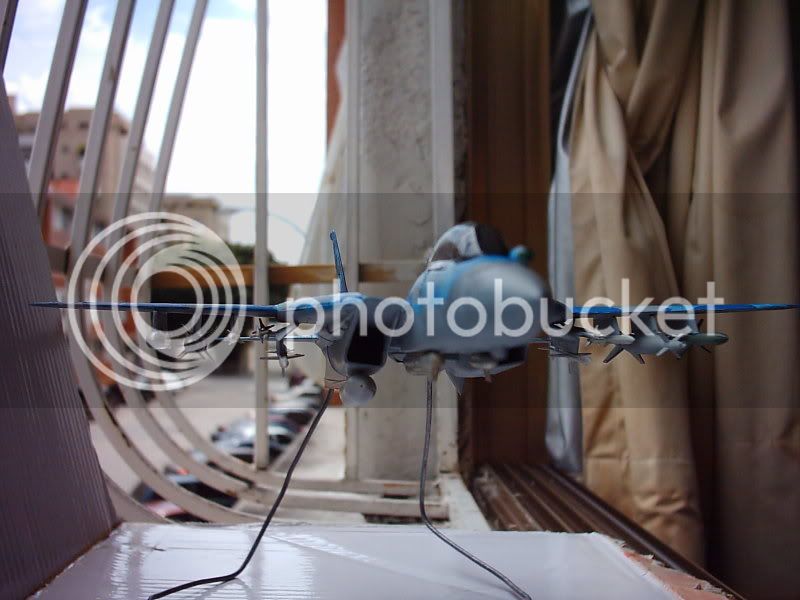 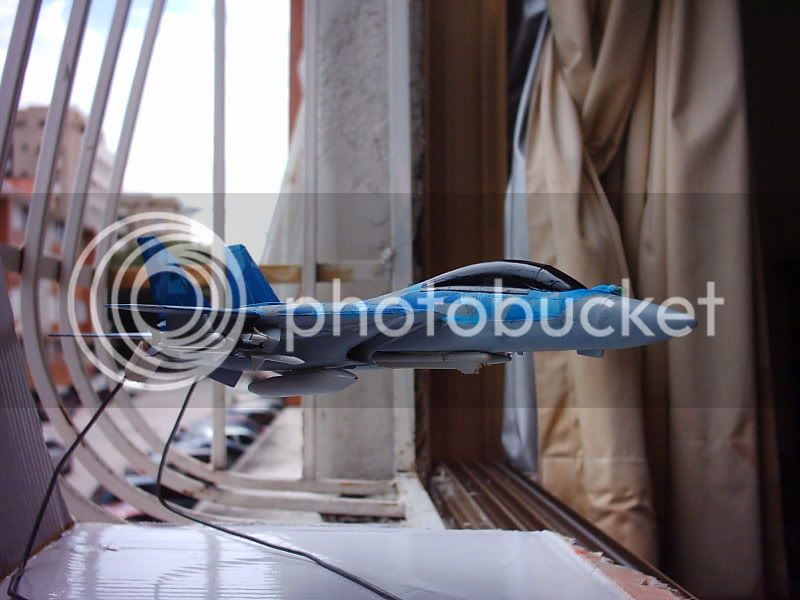 Top views, showing off the camo and weathered surfaces, for repeated excursions through the Mach and sustained combat operations 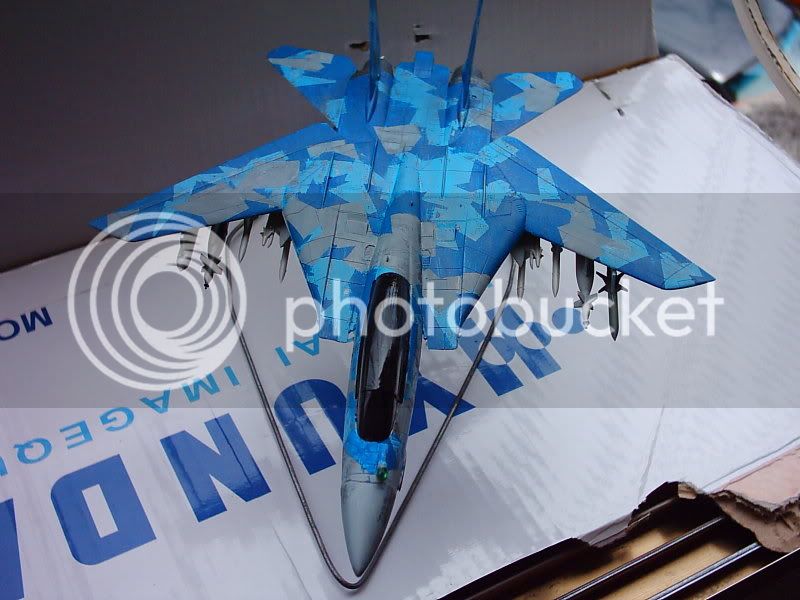 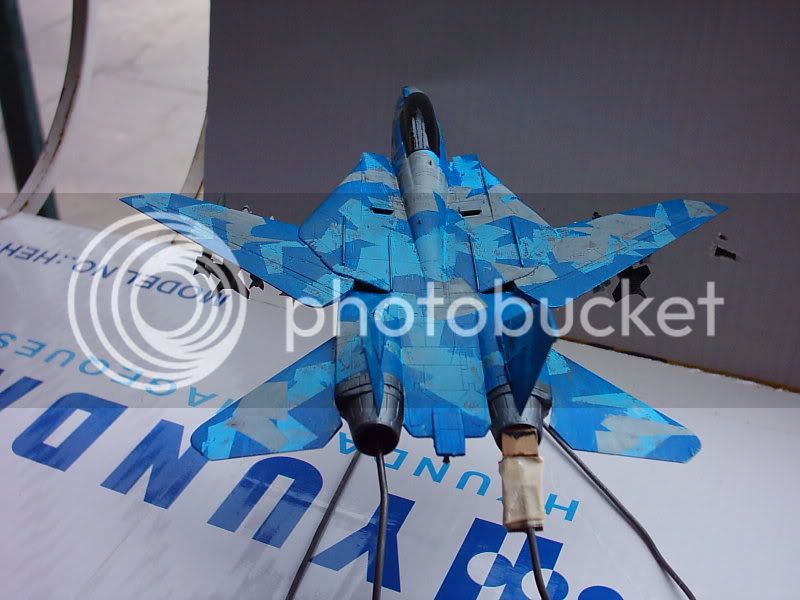 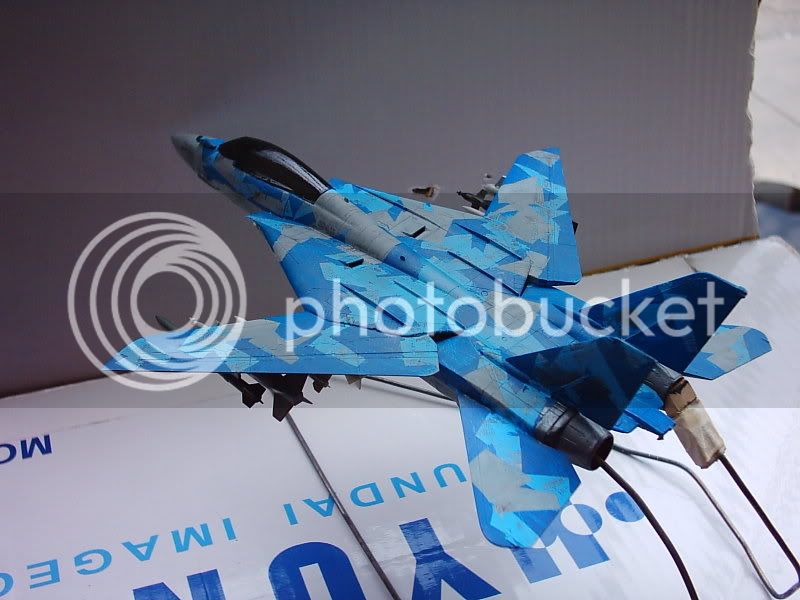 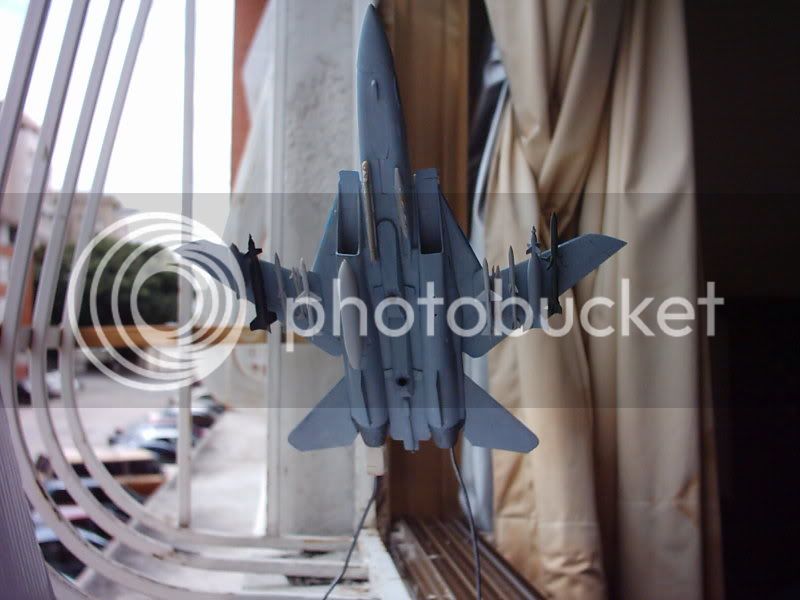