Comprehensive article on this topic from the contributors over at NASA Spacefight forum. I offer no opinion on the matter and ask you instead to read the article.

There seems to be two separate issues with this does it or doesn't it work and what is the theory behind it. I suspect at this time the first is far more important than the second.
F

Make of this article what you will.

However, he has now decided that it would be better to focus on putting EmDrive on to unmanned aerial vehicles, with the view to eventually use the technology in the automobile industry to create feasible flying cars.

"Our aim at the moment is not to necessarily go for these space applications, because they will take so long to come to fruition. So what we've decided as a company is to forget space, and to go for terrestrial transport business, which is huge," Shawyer told IBTimes UK.

"The logic is, if you can lift a vehicle reasonably gently with no large accelerations, then you can manufacture the air frame using much lower technology than would be used on an aircraft."

Shawyer says his firm, Satellite Propulsion Research Ltd, is currently designing a drone that has no propellers or wings, and it plans to carry out the first test flights powered by EmDrive microwave space propulsion in 2017.
Click to expand...

There has been so much nonsense written about this topic it's not funny. So it's nice to find a couple of reasonable pieces written about it.

Well... many people got into that.

There was this Rex Schlicher's radiating antenna patented device. Tested.
I remember seeing a demo from Stavros Dimitrious too. Quite unconvincing to me.
Oh, and Claude Poher's Universon theory with claimed propulsive applications and extensive patent description (Poher was a very influential French Space Agency - CNES individual)

Still, part of this debate on theoretical and applications grounds, seems to be rooted in the so-called electromagnetic momentum Abraham-Minkowsky controversy, and I'll let you do the homework on that. This concept showed up quite late (it was first described in 1904) before it populated today's classical EM theory with some misunderstanding and huge consequences. There is also this Graham and Lahoz (Canada) careful experiments from the early 1980s.

The Abraham minskowski controversy was recently settled (to the best of my knowledge) by a german scientist who essentially demonstrated both expressions of the EM momentum were actually the very same thing from distinct perspectives / assumptions. It just took a 100 years to understand this before stepping closer (i.e. with better theoretical clarity) into the EM momentum propellantless propulsion debate.

BTW, an interesting paper is going to be delivered at the next IAC congress in Israel by a couple of very smart guys on a related topics.

This by no mens endorses EM drive, which I 'd really LOVE to see working.

Article that sums up the latest progress by NASA's Eagleworks on their research into this topic.

Dr Rodal recently posted on the NASA spaceflight forum that NASA's Eagleworks after a very lengthy peer review process have had a paper accepted for publication in a peer reviewed journal.

I include this article merely because it includes the relevant reference links.

It goes without saying that this paper could just as easily invalidate the whole thing as prove a positive, so I wish the coverage would stop assuming automatically that it must be a positive result.

Anyway this is a better article that least gives the name of the relevant journal.

The peer reviewed paper is to be published in December.

This conference in regards to the EM drive is currently taking place. Videos will be posted up later on.

The new Eagleworks peer reviewed paper has now been published on the AIAA website.

Is new talk of interstellar drive too good to be true?

Final version of NASA EMdrive paper confirms 1.2 millinewtons per kw of thrust which is 300 times better than other zero propellent propulsion

After reading your and White et.al.'s AIAA article, Cambridge University astrophysicist recants and now says that he would like to see the EM Drive tested in Space.


I’ve been pretty critical of this experiment from the get go, and I remain highly skeptical. However, even as a skeptic I have to admit the work is valid research. This is how science is done if you want to get it right. Do experiments, submit them to peer review, get feedback, and reevaluate. For their next trick the researchers would like to try the experiment in space. I admit that’s an experiment I’d like to see.
Click to expand...

Aside from solar sails what other space propulsion is there that doesn't use propellant?
F

Now that the EmDrive has made its way into the peer-reviewed literature, it falls in range of Tau Zero’s network of scientist reviewers. Marc Millis, former head of NASA’s Breakthrough Propulsion Physics project and founding architect of the Tau Zero Foundation, has spent the last two months reviewing the relevant papers. Although he is the primary author of what follows, he has enlisted the help of scientists with expertise in experimental issues, all of whom also contributed to BPP, and all of whom remain active in experimental work. The revisions and insertions of George Hathaway (Hathaway Consulting), Martin Tajmar (Dresden University), Eric Davis (EarthTech) and Jordan Maclay (Quantum Fields, LLC) have been discussed through frequent email exchanges as the final text began to emerge. Next week I’ll also be presenting a supplemental report from George Hathaway. So is EmDrive new physics or the result of experimental error? The answer turns out to be surprisingly complex.
Click to expand...

Aside from solar sails what other space propulsion is there that doesn't use propellant?
Click to expand...

Aside from solar sails what other space propulsion is there that doesn't use propellant?
Click to expand...

You do realize that ions are the propellant in an ion thruster?
F

Part 2 of the analysis from Centauri Dreams.

Flyaway said:
Part 2 of the analysis from Centauri Dreams.

Just read part two of the analysis, I think that they've done a good job on looking it over and I would agree that the possibility of misreading the results has to be eliminated before you can call this thing proved or otherwise.

This video makes some interesting suggestions as to what might be going on.

Now a team of physicists have put forward an alternative explanation - it turns out the EM drive could actually work without breaking any scientific laws, if we factor in a weird and often overlooked idea in quantum physics - pilot wave theory.
Click to expand...

A new paper published in The Journal of Applied Physical Science International makes the argument that what we're missing is pilot wave theory - a slightly controversial alternative interpretation of quantum mechanics.

Researchers José Croca and Paulo Castro from the Centre for Philosophy of Sciences of the University of Lisbon in Portugal suggest that not only could pilot wave theory explain the mysterious behaviour of the EM drive, it could help to make it even more powerful.

"We have found that applying a pilot wave theory to NASA's EM drive frustum [or cone], we could explain its thrust without involving any external action applied to the system, as Newton's third law would require," Castro told ScienceAlert via email.
Click to expand...

Basically, pilot wave theory says that an object radiates a wave field, and it is then pulled or attracted to regions of that field that have higher intensity or energy density. In that way, the wave field is actually 'piloting' the object, hence the name.

Through modelling, the team showed that a sufficiently strong and asymmetrical electromagnetic field could act as a pilot wave. And that's exactly what the EM drive generates.

The team is now considering building its own experimental set up to study the phenomena and has invited anyone interested in the project to get in touch.

In the meantime, the NASA Eagleworks team continues to test out its device. And there are also groups looking to test the EM drive in space - or according to some rumours, already doing so - which would really show once and for all whether it works.

There's a lot we have yet to learn about the mysterious EM drive and it's a topic that continues to divide the science world. But whether or not it ends up being the future of space travel, at least it's teaching us more about the physics that govern our world.
Click to expand...

A new study from the University of Lisbon claims that a particularly overlooked theory in quantum mechanics called the pilot wave could explain a working EM Drive. However, there's much to be discussed about the viability of this assumption.
Click to expand...

Meanwhile, there's a nano satellite up, that is supposed to test an electric sail some time this year: https://en.wikipedia.org/wiki/Electric_sail .
It will be just for measurements and de-orbiting but the concept could work for travel too.
F

By the looks of it & going by this article we should soon see the back of the so called EM Drive.

This is about the most interesting thing from the article. I feel sorry for him, if that wasn’t what science is all about, having to expend all that time and effort on something he knows going into doesn’t work.

Jose Luis Perez Diaz in Madrid, Spain, and Martin Tajmar in Dresden, Germany, are carrying out the experimental side of the project. Tajmar confirms that he plans to publish two papers in February 2021, one on the “normal” microwave EmDrives and the other on the laser-based EmDrives. On the experimental side, Tajmar is still working on eliminating every possible source of error.

“We are still improving our balances and testing continues, “ says Tajmar. “In particular we are working on further reduction of magnetic field interactions with the environment, which was the major side-effect that we discovered in previous testing.”

When asked whether he might have an alternative explanation for the apparent thrust seen in previous tests, Tajmar only says to “Wait for the papers...”
Click to expand...

Pretty damming this section of the article.

Brice Cassenti, an expert in advanced propulsion systems at the University of Connecticut, goes with the general view that the EmDrive does not seem plausible because it violates the law of conservation of momentum.

“Only the electromagnetic waves emitted by the conical antenna can provide a momentum change, that can provide a force, and the force is several orders of magnitude too small,” Cassenti told Popular Mechanics. He believes the EmDrive’s enduring popularity with DARPA is because of the promise it offers.

“Many enthusiastic individuals want to believe it is a method that can be used to escape the constraints of known physical principles on space propulsion systems and open up humanity to voyages to the stars,” says Cassenti.

Cassenti believes it is important to explore new and challenging concepts, but given the infinite variety on offer, he prefers those with the backing of known physics. “In my opinion, it will always be better to invest engineering efforts in existing avenues that satisfy known physical principles and gradually build up science in new avenues for engineers to explore,” says Cassenti.
Click to expand... 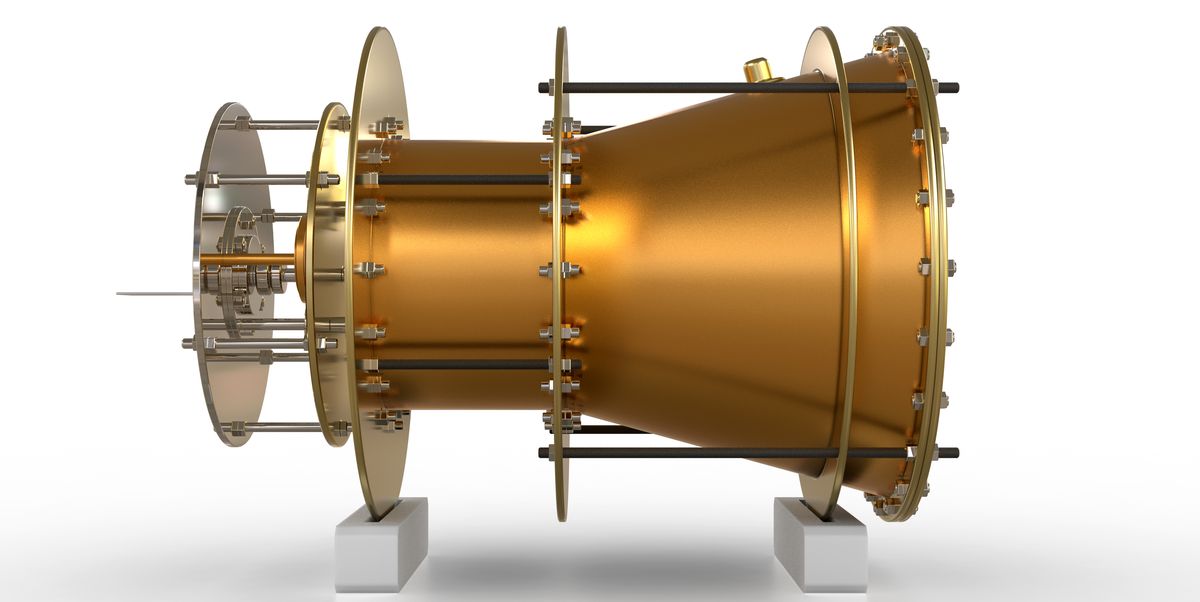 More than 20 years after its introduction, the EmDrive is still being tested in labs around the world, including DARRA. But the controversial thruster's do-or-die moment is quickly approaching.