They are a bit Scratchy anyone got better?

Interesting photo found in a pile of old photos at a local bookshop. There's also a T291 photo if anyone is interested. Dated June 1969, copyright Harry Naef.

I think its a low wing version of the TA 501? Its just called "Alpha Jet" on the nose.

There's an artist rendering of the E-650 in Le fana de l'aviation, July 2004 (they explain the background of the ACF program, particularly the lack of competitors to Dassault in the ACF... first time it happened since 1910 and fundation of militayr aviation in France )

Thank you my dears for explanations.

The E650 mockup still survives. I saw it years ago in the small aviation museum at Villingen-Schwenningen in southern Germany. Not sure if it's still there.

My German's pretty rubbish but it looks like its not on display any more.

You're right, it's in storage. Very unfortunate, since i know of very little places where original mockups survive. Come and think of it - i'm going to post a thread on that.

The E 650 was at the "Luftwaffe Museum " in the 80' ( then at Uetersen near Hamburg ,now at Gatow near Berlin )
Right side of this picture (part of a poscard I got at Uetersen )

Interesting, MBB and Sud Aviation set up in december 1969 a GIE Eurotrainer (like Airbus) for this program.

Dornier P375 is described in Flight International, 14 Dec 1967. Unfortunately seems to be missing from website.

Collaboration in a more concrete form (or more accurately, in wood and metal forms) is to be seen in Hall C. where two of the three Franco-German subsonic trainer projects exist in coy juxtaposition as full-scale mock-ups. The first is the E.650 Eurotrainer, proposed jointly by Snias and MBB (Messerschmitt-Bolkow Blohm) with French design leadership. Alongside stands the Alpha Jet, by Dornier and Dassault-Breguet, in which the leader is Germany. The Eurotrainer, in green and brown camouflage, is a low wing design with a high tail, while its counterpart, finished in white, has a shoulder wing and fuselage-mounted tailplane. Both have been designed with private money; government support does not begin until the contractor has been selected.

Both aircraft are twin-engined, and designed to take either the Snecma Larzac of 2,464lb. 10.9kN thrust or the General Electric J85-GE-4 rated at 2,950lb, 13.1kN thrust. The French and German Governments each have a requirement for 200 aircraft, and one of the stipulations in entering the design contest was that a firm in either country would have to team with a partner from the other. Both are designed around a combined trainer/light-strike role (designation TA on the fin of the Alpha Jet denotes training and attack). The winner will replace the venerable Magister in France, but its adoption in Germany will signal the beginning of a new training philosophy for that country. For some years fight crews for the G A F have been trained in America, beginning on Cessna T-37s and graduating to Northrop T-38 Talons. While certainly helping to offset the costs of maintaining American troops in Germany, the forces of nationalism are beginning to press for a "homegrown" product. More to the point, training in clear American skies is hardly a suitable preparation for fighting in proverbially poor European weather.

A model of a similar project, the Type 291 by VFW and Fokker, demonstrates the thoughts of this now-combined Dutch-German firm. This, too. would have twin Larzacs or J85s. but in view of the political constraints mentioned above in connection with the Franco-
German projects, its realisation (at least in response to this competition) appears remote.
Click to expand...

THE NEW DESIGNATION E.650 now used for the Franco-German trainer proposed by Snias (Sud-Nord-Sereb) and Messerschmitt-Bolkow-Blohm aircraft division (Flight, January 29, page 171) was given when the joint project teams completed the design phase shortly before the end of last year. This project is based on the MBB Type 462 and the Nord SN600. It will be powered by two Snecma-Turbomeca Larzac engines, have a speed range lying between Mach 0.2 and Mach 0.9 and be able to operate from unprepared strips. Weapon load for eventual ground support missions will be about 3,360lb, 1,524kg, and the all-up weight will probably be about 11,200lb, 5,080kg. The two seats will be in tandem.

Another proposed Franco-German trainer has now appeared on the scene, making three all told. This is the VFW T291, shown in model form in the photograph on this page. Like the others, this would replace the Fouga Magister and Lockheed T-33 types.

Newcomer on the European military jet trainer scene, VFWs T291 proposal has a shoulder wing layout, its structure being designed for afterburner powerplants (two Snecma Larzac 02s or two J-85 CE4s) so that operation at low supersonic speeds is possible.
Click to expand...

a supercritical wing with Alphajet.

Models of basic and advanced versions of Dornier's proposed DoP375 Universal Trainer designed with the aid of a computer to formulate the handling characteristics of any aircraft about all six axes of freedom in all flight phases. The area-ruled fuselage is common to both, but wing plan-forms distinguish subsonic and supersonic versions; the latter, below has longer engine nacelles to accommodate afterburners on its Bristol Siddeley BS 358 turbofan engines. The Universal Trainer is in the project study phase at Friedrichshafen
Click to expand...

Unofficial artist drawing of a single-seat Alpha-Jet. The free space would have been used for extra fuel and ECM equipment.
From Flug-Revue 01/1976, page 2?.

The picture comes from the 15th June 1969 issue of Aviation Magazine International...... 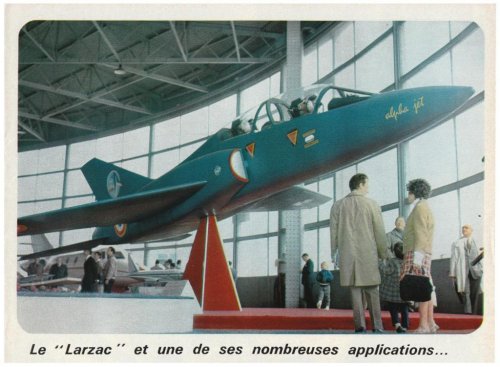 Dear Boys and Girls, here is in article in French about the Dornier Alphajet "projects"; I do not know if all of the designs are Dornier's (the article isn't clear to me)......

The article comes from the 15th February 1969 issue of Aviation Magazine International......

Dear Boys and Girls, here is an artist's impression with a caption in French of the Bréguet Br.126 Alpha Jet "project"......

The picture comes from the 1st June 1969 issue of Aviation Magazine International......

Good find, richard. Thanks. Are in the text any designations?


It could be interesting to compare those 7 Dornier proposals and the 7 Dornier/Breguet proposals shown in the book :Der Alpha Jet: Amazon.de: Bernd Vetter, Frank Vetter: Bücher ( just click on the cover to get the 7 three views )

a supercritical wing with Alphajet.