The Euclid space telescope is coming together
09/07/2020
72 VIEWS
0 LIKES
ESA / Science & Exploration / Space Science
ESA’s Euclid mission has reached another milestone on its journey towards launch. Its two instruments are now built and fully tested. These have been delivered to Airbus Defence and Space in Toulouse, France, where they are now being integrated with the telescope to form the mission’s payload module.

Euclid consists of a 1.2-metre mirror telescope that is designed to work at both visible and near-infrared wavelengths – the latter being just longer than the red light humans can see. The telescope will collect light from distant cosmic objects and feed it into two instruments.

The Visible instrument (VIS) and the Near Infrared Spectrometer and Photometer (NISP) will run in parallel, recording data simultaneously from whatever portion of the sky the telescope is pointed at.

Euclid’s mission is to measure the shapes of more than a billion galaxies, and the accurate redshifts of tens of millions of galaxies across more than one third of the sky. The redshift is an effect caused by the expansion of the Universe. It stretches the wavelength of light emitted by distant galaxies; the further away the galaxy, the more extreme its redshift. The galaxies in Euclid’s survey will span 10 billion years of cosmic history, and allow scientists to investigate the mysterious dark matter and dark energy that are thought to dominate the Universe.

The VIS instrument will handle the precise measurement of galaxy shapes by taking the very best images of distant galaxies that it possibly can. To do this, the instrument uses a mosaic of 36 CCDs, each of which contains 4000 pixels by 4000 pixels. This gives the detector a total of about 600 megapixels.

“The design, development, manufacturing, testing and calibration of the VIS instrument over a dozen years to a stringent specification has been a challenge,” says Mark Cropper, VIS instrument Lead and Professor at the UCL Mullard Space Science Laboratory, UK.

“We are immensely proud of what the VIS Team has achieved to bring this project to its culmination. That the final performance exceeds our expectations is a tribute to their expertise, dedication and professionalism.” 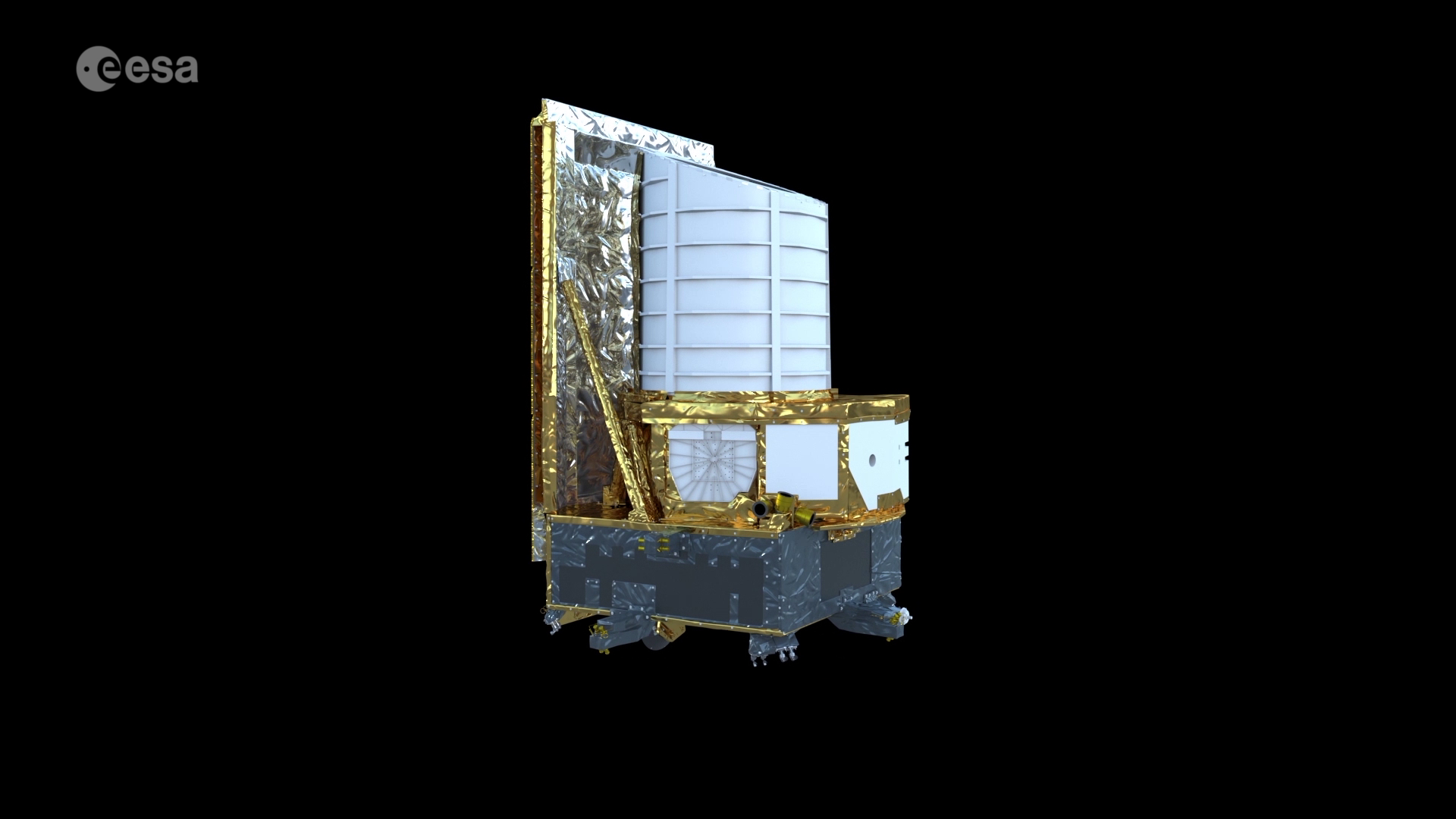 The Euclid space telescope is coming together

ESA’s Euclid mission has reached another milestone on its journey towards launch. Its two instruments are now built and fully tested. These have been delivered to Airbus Defence and Space in Toulouse, France, where they are now being integrated with the telescope to form the mission’s payload...
www.esa.int

ESA plans to launch this telescope in 2022. Even though the Euclid space telescope is in development yet, it already may be considered an important achievement. I hope that its launch will go well and engineers will achieve their aim. The understanding of dark energy and dark matter is essential for the future of space exploration.

Our @ESA_Euclid is ready for the extreme environment of space!

ESA is now one step closer to unveiling the mysteries of the dark Universe, following the coming together of two key parts of the Euclid spacecraft – the instrument-carrying payload module and the supporting service module.

On 24 March, over a dozen engineers gathered at Euclid industrial prime contractor, Thales Alenia Space in Turin, to carefully attach the two main parts of the Euclid spacecraft together. This task required such extreme precision that it took a whole day, followed by two days of connecting electronic equipment and testing that Euclid’s instruments still work.

“It was really exciting to see the spacecraft coming together and get one step closer to seeing the mission become a reality. I almost feel like we have united two family members,” says Euclid Assembly, Integration and Testing engineer Hans Rozemeijer.


Provided by Airbus Defence and Space, Euclid’s payload module houses a reflecting telescope to capture and focus light from distant stars, as well as two instruments to record this light – the VISible imager (VIS) and the Near Infrared Spectrometer and Photometer (NISP).

Together, the telescope and instruments will image billions of galaxies with unrivalled accuracy to help astronomers better understand how they have evolved and clustered into cosmic structures over the last 10 billion years. This will give us clues on the nature of the enigmatic dark matter and dark energy, the two main drivers of the expansion of the Universe.

Euclid’s instruments were integrated onto the payload module at the end of 2020. During 2021, the complete module successfully passed intensive testing under simulated space conditions to check that the telescope and instruments work as expected.

The service module is equally as important. It contains computers to control the instruments as well as all the essential parts that Euclid needs to function, including subsystems to control the orientation of the spacecraft, propel it through space, distribute power, communicate with Earth, and handle data transfer.

To connect the two modules together, engineers used a crane to lower the 800-kilogram payload module onto the service module via six attachment points. The team took great care to make sure that these points matched up very well, as a poor contact could induce stresses that damage the structure or deform Euclid’s 1.2-metre telescope mirror.

“We had to make sure that the flatness of the service module closely matched the flatness of the payload module at the connection points to reduce the loads on the telescope as much as possible,” explains Hans. “We were targeting a difference of less than 50 microns at every point. It’s not like a piece of Ikea furniture that you can hammer into place – this task required extreme precision!”

To put this into perspective, 50 microns – or 0.05 mm – is the diameter of a thin human hair. Before attaching the two modules together, the assembly team checked the smoothness of the connection points with a laser and used very thin spacers called shims to even out the surfaces where needed.

“The Euclid spacecraft is truly complex and during the past months all the people involved in its integration were asked to be highly performant in meeting challenging schedule and operations. Let me thank the team of Thales Alenia Space and our industrial partners for the remarkable job done in full synergy with ESA representatives to reach this important milestone,” says Paolo Musi, Director of Science Programs at TAS.

In April engineers will attach Euclid to its combined sunshield and solar panels. The sunshield will shade the payload module from the Sun’s intense radiation, helping the mission perform to the very best of its abilities.

Once the sunshield is connected, the high gain antenna will be added and then Euclid will be complete. The finished spacecraft will measure about 4.5 metres tall and 3.1 metres wide. After that Euclid will be tested as a complete system and prepared for launch from Europe’s Spaceport in French Guiana.
Play
$video.data_map.short_description.content
Euclid animation - 360 degree view
Access the video 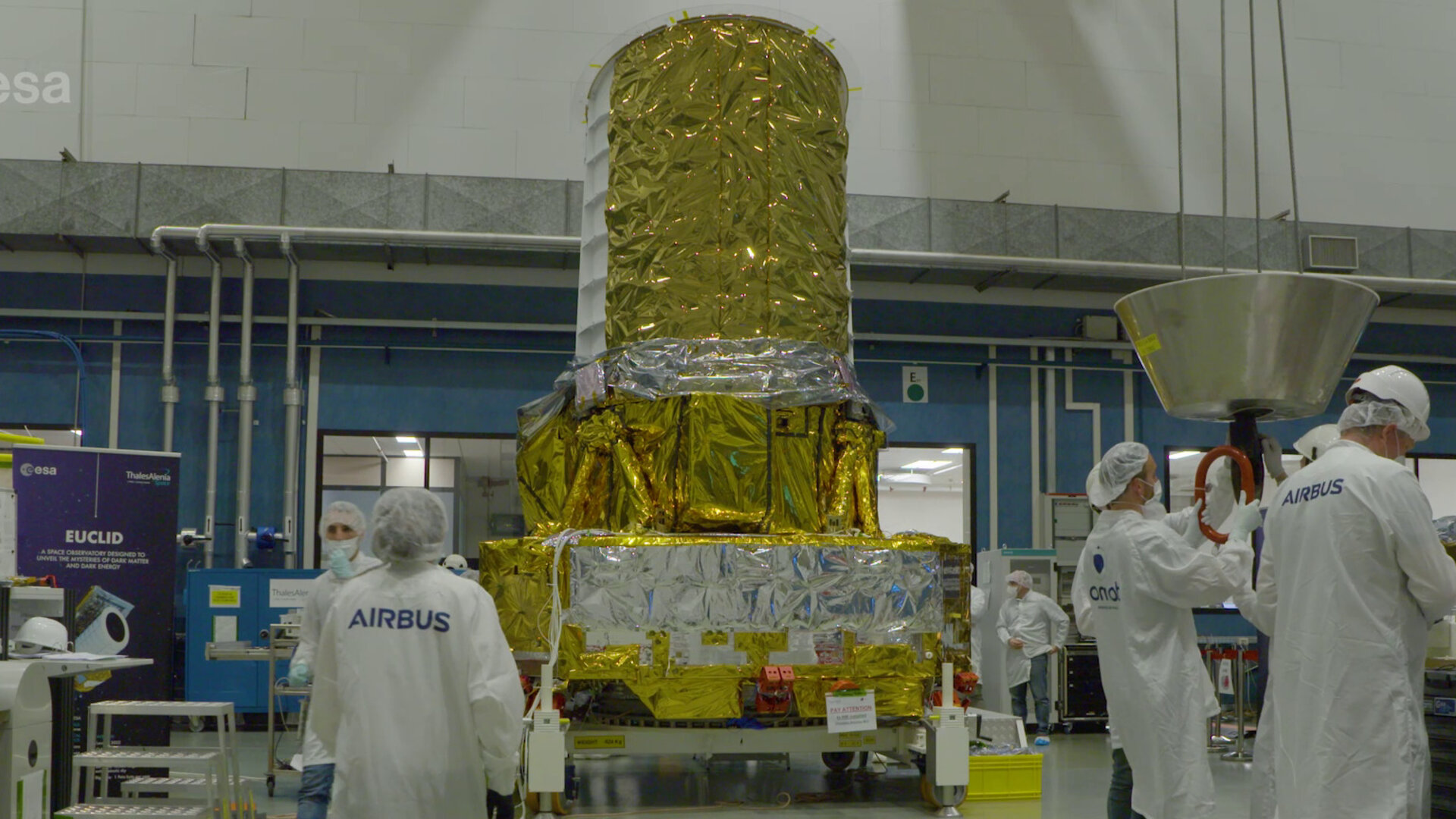 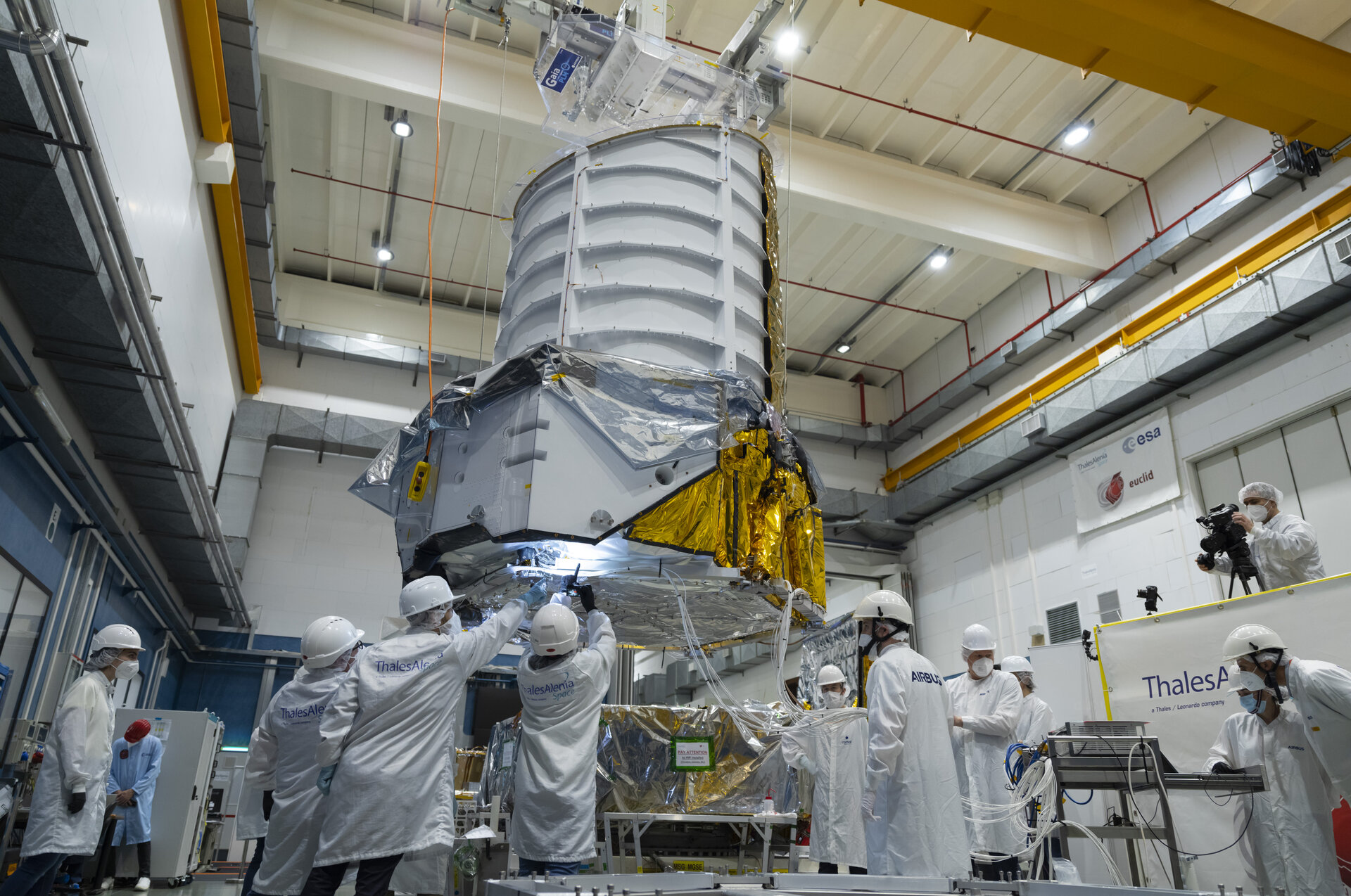 ESA is now one step closer to unveiling the mysteries of the dark Universe, following the coming together of two key parts of the Euclid spacecraft – the instrument-carrying payload module and the supporting service module.
www.esa.int