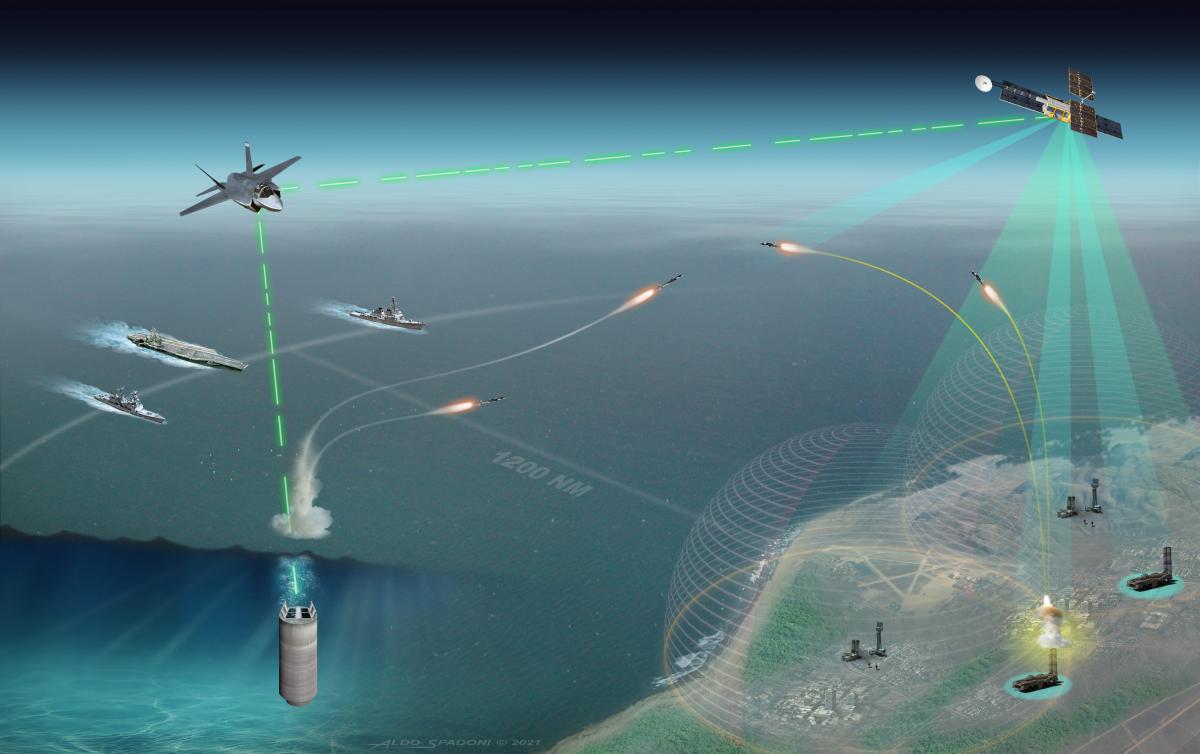 The effector payload module, as envisioned by the Strategic Studies Group in 2009, could achieve distributed lethality at a fraction of the attendant cost of additional hulls.

By many accounts, SSG XXVIII in 2009 was the last group to issue a landmark exposition of future warfighting concepts, one that rationalized the employment of unmanned systems across a range of Navy warfare communities.

One such concept that merits reexamination in an era of great power competition is the effector payload module (EPM). The EPM was envisioned as a deployable, submerged, serviceable, conditioned, hibernating multiuse womb that would hold in readiness a variety of sensors or weapons that could deepen warfighting capacity in the early phase of an intense exchange with a great power competitor. To borrow from Vice Admiral Thomas Rowden's description of distributed lethality, EPMs would permit the Navy, when operating offensively near China’s declared first island chain, “to ‘spread the playing field,’ providing a more complex targeting problem” while creating more favorable conditions to project power where required.

In the 2009 study, the SSG provided only the sparest description of an EPM. Consistent with that year’s study theme of unmanning to disaggregate, and disaggregating to penetrate hostile antiaccess, area denial environments, they proposed a "separation of weapons across the domains into multiple readily deployable launchers," named effector payload modules. The SSG’s investigation did not go deeper than a graphic illustration and a suggested weapon load, inviting further speculation as to how an EPM might be constructed.

Assuming Standard Missiles (SM)-3 and -6 as the preferred multiuse weapon load, single missile canisters grouped in a truncated four-canister version of the standard eight-canister module of the Mk-41 vertical launcher system, would establish the baseline configuration for an EPM magazine. This quadruple canister package would be joined around a central uptake shaft for rocket exhaust gas management. The girth of the quadruple pack might be extended only slightly to accommodate a launch sequencer unit, motor control panel to exercise authority over moveable hatches and drains, and programmable power supplies.

A means for remote activation and launch would require an extendable antenna, receiver, and processor. A launch-control unit would be positioned remotely, perhaps shipboard or airborne and could be relayed through overhead means, with connectivity to the EPM’s antenna. The four-canister arrangement would be encased in a watertight aluminum shell surrounding the outside dimensions of the EPM, acting much like a spar-type buoy. The spar buoy shape would best mitigate the heave and roll in an open ocean emplacement, providing the optimum shape for "stability in a deep-draft, slender-body design," and the shell itself would enclose enough volume to allow for slightly positive buoyancy of the EPM. A ventral compartment containing rechargeable long-life batteries would help stabilize the EPM in an upright position.

A mooring anchored to the sea floor might be the optimal design for fixed emplacement, however may narrow deployment to ocean depths of 1,000 feet or less because of a finite limit on the length and strength of the mooring line. This could constrain mooring options in the western Pacific Ocean to those areas where the undersea geography is predominated by ridges or plateaus, subjecting the EPM and its mooring to stronger currents. A slack mooring might be preferred, with a primary consideration being the length of mooring line required. In this case, "the mooring line, chain, and shackles hang under their own weight relying on the reserve positive buoyancy" of the EPM to support them.

EPMs would most likely be inserted in the western Pacific before hostilities occur, with indications and warnings of an imminent threat, and in the time remaining before the airspace and seaspace surrounding probable deployment areas becomes contested. The SSG, in its study, suggested sea surface launch from Wasp-class amphibious assault ships or San Antonio–class amphibious transport docks, whereby a floating EPM could be towed out of the well deck by support craft and released. An option not considered by the SSG would be a less obtrusive deployment from a littoral combat ship (LCS). An estimate of mission bay volume inside an Independence-class LCS suggests as many as ten EPMs could be stored in readiness in the mission bay for deployment by crane out of the stern door of the ship. Ten EPMs loaded with SM-6 missiles could be emplaced in submerged position containing as many as 40 missiles in ready magazines. For covert deployment in contested areas, the SSG recommended considering ejecting EPMs from the payload tubes of Virginia-class submarines. This would necessarily be slower and a more deliberate process than a surface launch.

In every situation, the life of the EPM is a consideration, particularly as it relates to battery life and seakeeping. Design provisions could be made for recharging by passing ship or submarine if longer duration required. More likely, EPMs would be recovered within a few months by the same means they were deployed. If an EPM were discovered by a possibly hostile entity before its use, further provision in the design could permit flooding or detonating when a tripwire is actuated. Once deployed and in place, however, the question for operators is when and how best to exploit the capability.
Click to expand...