These drawings can be found on the site Dutchsubmarines.com, albeit in multiple segments. The cargo submarine concept is a throw back to the WWI German concept - perhaps even the later the later "milch cow" u-boats? I do have to wonder if this design was prompted by the Dutch experience in the East Indies, where land bases were lost to the Japanese so quickly that the utility of the Dutch submarine flotilla was severely limited. Did the Dutch intend to rebuilt their East Indies submarine flotilla after the war?

The triple hulled design was eventually produced as the Dolfijn class, which in turn was replaced in production by a variant of the American Albacore design.

The unbuilt 1,125 combat submarine, 1,600 cargo submarine and the final Dolfign class are all represented in the below attachments.

Roodbaard1958! said:
The design 2086 dated from 2 September 1952 of a submarine with standard displacement of 1.000 tons. Watch especially the flag on the conning tower/sail, which resembled the Brazilian. I have the impression that is the late 1930s design The drawing can be downloaded using this url: https://hdl.handle.net/21.12113/3C5C082EA5084B4DBAAE04FCCB6A7443
Click to expand...

Drie-Cylinders Duiken Dieper by KHL Gerretse and JJA Wijn, Van Soeren & Co 1993, tells the story of the Dolfijn-class.
The authors state that the 3-cylinder submarine was the brainchild of designer MF Gunning. He spent most of WW2 in London, after being caught in Portugal when the Netherlands were overrun. He spent much of his time in close cooperation with the UK Admiralty, where, during the siege of Malta, the use of submarine freighters was considered to supply the island. Gunning developed his 3-cylinder concept from German designs with two cylinders stacked on top of each other. The two lower cylinders did away with the need for ballast in conventional designs, placing batteries and machinery there, thus creating more useful volume for cargo, as well as providing protected fuel storage between the three cylinders. There was some interest from the UK Admiralty, but having their hands full with producing conventional submarines, the Admiralty did not proceed with 3-cylinder subs. Gerretse and Wijn do not mention any earlier work on 3-cylinder designs.

I therefore doubt your excellent find is directly related to 1930s designs. However, I would be thrilled if any 1930s 3-cylinder designs were to surface, proving me wrong.
Last edited: Nov 29, 2021 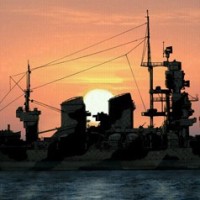