do anybody know what is the experimental "flying disc" shown at minutes 19:18-19:22 of this video by Jane's journalist Nick Cook, please?

I have made 3 stills from the video:
- the disc is dropped:

- two opposite jets start and cause a rotation of the disc:

- the jets stop and there is a small explosion, with black smoke: 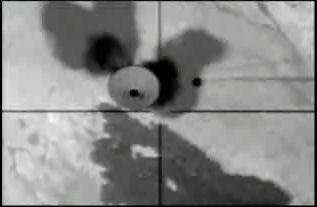 The PEPP Aeroshell was created to test parachutes for the Voyager mars landing program. To simulate the thin Martian atmosphere the parachute needed to be used at an altitude more than 160,000 feet above the earth. A balloon launched from Roswell, N.M. was used to initially lift the aeroshell. The balloon drifted west to the missile range where the vehicle was dropped and the engines beneath the vehicle boosted it to the required altitude where the parachute was deployed. The tests were conducted in the summer of 1966. NASA. The Voyager program was cancelled, and replaced by the much smaller Viking project several years later.

Later, NASA used the Voyager name for the Voyager 1 and 2 probes to the outer planets--these had nothing to do with the Mars program called Voyager.

There is one PEPP Aeroshell left over, at White Sands Missile Range, New Mexico.

Dear Flateric,
thank you very much for the precise and quick answer, I knew I would have found excellent information in this forum!

I have just a furher question: why do the two jets cause a rotation to the PEPP Aeroshell? Was it a malfunctioning that happened just during the filming of that video, or was it an intended effect, maybe for gyro-stabilization?

it was intended effect
Googling will give you the answer

Thank you very much, you have been as fast as a lightning!