I have a section of the cylinder block of the 710. Let me scan it in.

Here is the DZ 710 from page 131 of Luftwaffe Secret Projects: Strategic Bombers 1935-45 by Deiter Herweg and Heinz Rode 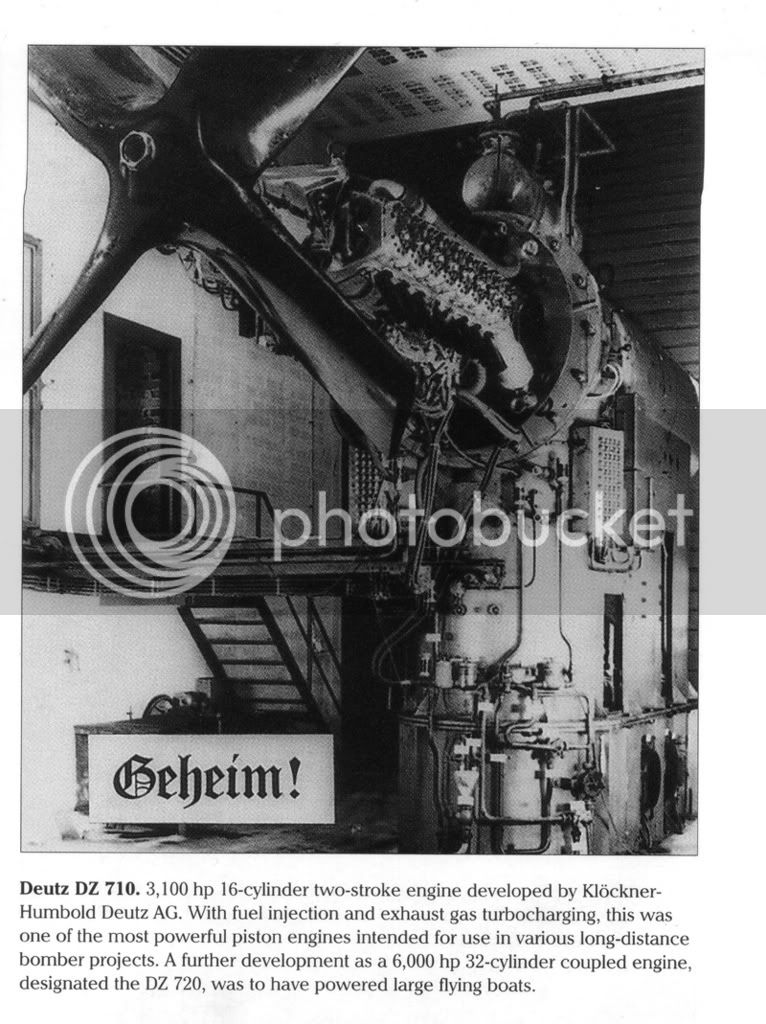 thank you, Nick. It was impressive indeed. I have that book, but I was trying to see something new. I guess it`s a hard job to find such photos of this experimental powerplants.
W

the latest edition of "Flugmotoren und Satrhltriebwerke" also shows images never seen by me on the Deutz Dz710 and Dz 720. Excellent.
T

Not sure why this is not in propulsion but note the pictures here.
B

New to me... did it have any influence on the Nomad?
T

Napier started Nomad in 1944 so unlikely that they were aware of German engine... they had the Sabre in production and their pre-war Culverin/Cutlass (licence-built Jumo 3/4A) engine experience to call on.
Whether the team that in 1945 worked on Nomad I knew about it I am not sure... the US were the ones to reach KHD and get the engines to US to help their hyper engine programme. The likelihood is they knew when the simplification redesign programme got underway in the early 50s resulting in the Nomad II. I wonder what the US published in their intelligence reports?
All this technology went into the Deltic marine and railway engine; Napier, with the Admiralty's help, solved problems that Junkers encountered when they looked at the Deltic form for the Jumo 223 before settling on a rhomboid form with four crankshafts!
There are some larger pix here, Run it through Google translate if language is unfamiliar!

I have always found the KHD engines to be very interesting. Since tartle discovered those photos on the gkmo site, I decided to put together all I have on the Dz engines (link below). My fingers are crossed that I got the info correct. If it aids the discussion, feel free to copy the info to this thread.

Great stuff!
I like to think of these discussions as provocations to do that bit of work I have been putting on hold for several years/decades.
The feedback people give is so useful to do stuff I thought only I was interested in!
So I hope people who view can leave some feedback to encourage us all!
P

A big thank you to WJPearce for information on the Deutz engine proects.

Hmm - the radial reminds me of this:

Thank you all. I'm glad others appreciate these odd things that have been almost lost to history. I agree with you tartle, I find this forum very informative and inspirational.

I found one more.

Here goes a stallion from the KHD stable (original drawing).

Intended for 4000hp, this is most probably the version slated to be optimal at 6000 metres. It was the Dz 710`s "daddy", a twin 12 cylinder boxer two-stroke gasoline engine with a turbosupercharger per cylinder bank. Later it was changed to 16 cylinders (Dz 710) and then to diesel.
A radial with six banks, much like the Jumo 222 was considered too.​
It`s published in
"125 Jahre Motorenfabrik Oberursel – 1892-2017", published in 2017 by Helmut Hujer of the Geschichtskreis Motorenfabrik Oberursel (GKMO). Helmut very kindly permitted to post this image, and I strongly recommend this book (in german) to those who love engines.

thx for the hint. Do you have additional information regarding the mentioned six bank radial aero engine? Besides the Deutz 710 / 720, were there other aero or tank engines in concept phase?
W

nothing more on that six-bank radial but the mention, and that the Dz700 was considered as a tank powerplant.
B