So i have been reading up on the dh Vampire and its variants. When i tried looking up info on the Mk.7 variant i could not find much except sources which acknowledges that there isnt much information on it. Anyway i didn't think too much of it and moved on to other variants etc. However when i looked into the Mk.50 (Vampire FB.50), aka the J 28B in Sweden, i happaned to stumble across this when i read the Swedish air ascociation book about the J 28 Vampire. According to that book, when Sweden signed the order for the Vampire Mk.50 (name of contract: contract 15/MA) on the 19th of December 1947, it specified the ordered type as the Vampire Mk.7. The book continiues this however by saying that the Mk.7 was just a projected variant that never entered production. However after that it says that the Swedish Vampire Mk.50 was based on the Vampire Mk.5, Mk.6 and Mk.7.

Here is a snippet from the book for those who can understand Swedish. 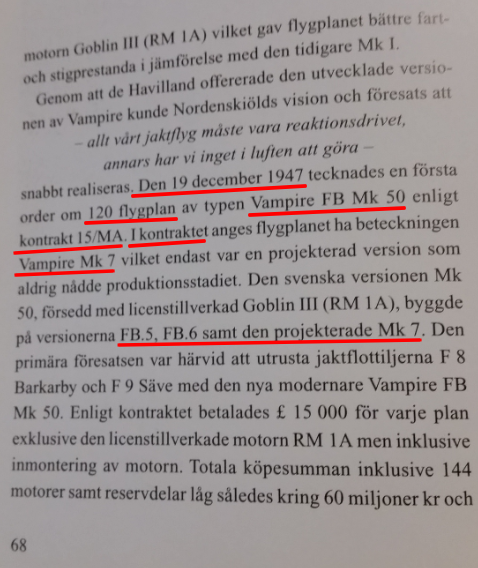 The book History of the de Havilland Vampire, by David Watkins (Fonthill, 2013), states;
"In 1948, Sweden also placed an order for ground-attack FB 50s fitted with Goblin 3 engines, and based on experience gained from the Vampire FB 5/FB 6 and the projected Vampire Mk 7, de Haviland built 310 of the type under the Swedish designation J28B."

The FB.5 was the standard ground-attack RAF Vampire variant with the 3,100lbf Goblin 2.
The FB.6 was an FB.5 with the 3,300lbf Goblin 3, one FB.5 was converted and later were this mark was built for Switzerland - confusingly not receiving an export designation! Other F.6s built for India, Iraq and Italy were designated FB.52s.
The Mk. 7 would also have had the Goblin 3 engine but was not proceeded with.
The FB.8 was single conversion with a Ghost engine, quickly abandoned in favour of the Venom.
The FB.9 had the Goblin 3 and an air conditioning pack for overseas use.

My hypothesis is that the Mk.7 was intended as a production FB.6, presumably there might have been some refinements based on operational experience with the FB.5, indeed it could be argued that the FB.9 was the Mk.7 but with air con added.
The Swiss FB.6s were never marked with an export designation, which is odd (perhaps because when ordered in 1949 local licence-production was not a requirement?), it seems likely they would have been identical to the FB.52. So there probably was very little difference between an FB.6, 50 or 52 beyond local radio fits.
Share:
Facebook Twitter Reddit Pinterest Tumblr WhatsApp Email Share Link