An artist's stylized concept of a land-attack missile destroyer, showing a ship with a very small RCS, a large vertical-launch missile battery, and two 155-mm long-range guns (one aft of the superstructure). Such a design would be a major departure from previous surface ships, which have substantial RCS and infrared signatures. The DD 21 is shown with conformal radar and communication antennas. (United Defense)
Click to expand...

Projectiles fired from an electromagnetic railgun will travel up to 290 miles in less than six minutes, exiting the atmosphere before hurling into their target at a velocity of 5,000 feet per second. The force of the impact will obliterate targets without an explosive aid.
Click to expand...

Distributive Aperture System:
Initiate:
(U) For Surface Ships, the Navy will launch a technology program (FY02 through FY06) for a ship based Distributive
Aperture System (DAS) Infrared Search and Track (IRST) for transition to DDX, CGX, and CVNX. The staring IRST system
will enable a passive self-protection capability for U.S surface ships. The system will address the need for low
radar cross-section sensor for surface naval ships. The system will provide 360-degree staring panoramic view and
awareness at-sea and in port of the surface, air, and asymmetric target set. Each module of the staring system will
consist of focal plane arrays, anemorphic optics, stabilization, and modularization techniques. The ship’s combat
center will control the DAS through a central computer high-speed processor. The DAS, consisting of eight modules
for surface combatant ships will vary based on the size of ship. It will provide surface ships with a 360-degree
panoramic staring view on the horizon to line of sight, and be able to detect, declare, and track air contacts and
surface contacts within 2-3 seconds. The sensor modules will also be able to pan its view downward to view the
surface from the ship to line of sight for in port counterterrorism awareness. DAS will address the surface naval
ships needs for a passive fighting and in-port security ability. The Navy will demonstrate a three-module prototype
with a high-speed central computer in FY06. It is critical to demonstrate the technique to seam stitch three sensors
panoramic view.
Click to expand...

A lineup of alternative hull forms considered for SC-21. These are not all designed to equal capabilities. The two ships to the top of the image have fewer VLS cells and no VGAS (the little bright circles near the superstructure in the lower two ships)

SC-21 COEA Concept 3B1 "Littoral Combatant". This concept was chosen to be moved forward into the next stage of production (the DD(X) program), and is now the Zumwalt-class destroyer. This drawing is from Norman Friedman's U.S. Destroyers: An Illustrated Design History (Revised Edition), and is dated around 1995, right after the SC-21 programs started. The "VGAS" it mentions is the "Vertical Gun for Advanced Ships", and was ultimately developed into the AGS. It can be seen here in this poorly scaled image I posted below. Note everything except the barrel would be below the deck, and it would take up the same space a 61/64-cell Mk 41 block. It could only fire guided shells. I believe the radars it mentioned where later developed into the SPY-4 and SPY-3. 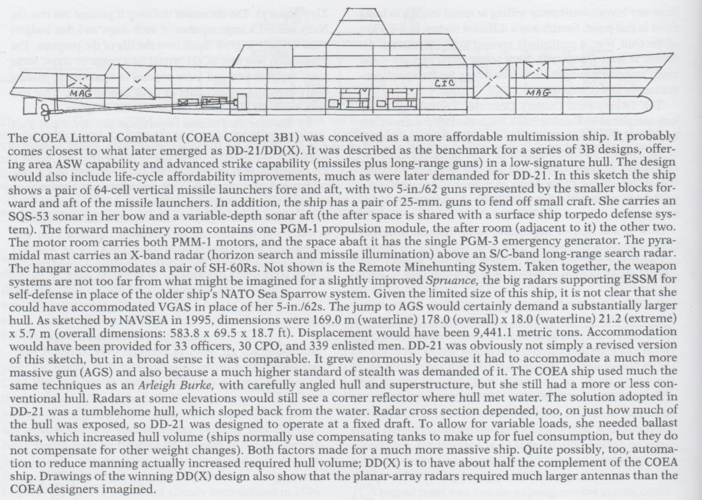 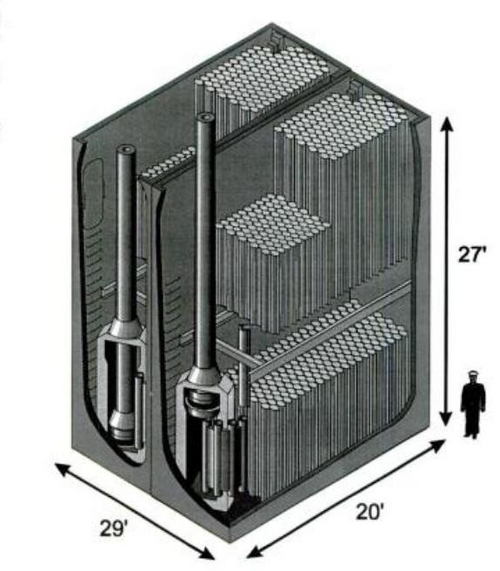