This is a new one to me. I've searched the forum and could not find much if anything on it, so I am posting a new topic dedicated to the Convair 660, a short-haul twin-jet. (Please remove or combine with another appropriate topic, if it already exists). The model photos (and artistic rendering) of the Convair 660 below were posted today by the on the Flickr Commons by the San Diego Air & Space Museum (SDASM) Archives. It appears as described as a DC-9/737/F-28 competitor, with even a "combi" arrangement illustrated.

As per the 7 December 1967 Flight International (Pg. 932) http://www.flightglobal.com/pdfarchive/view/1967/1967%20-%202342.html :
AFTER a lapse of several years, General Dynamics are making another effort to get into the commercial aircraft manufacturing business with an entirely new type. Airlines are being canvassed for their opinions of the projected Convair 660 for up to 88 passengers and powered by two Rolls-Royce RB.203-1 Trents and designed for short-haul markets at present being tackled by the Fokker Fellowship/ Fairchild Hiller F-228. According to details published in the Interavia Airletter and reproduced here, the 660 promises to have a greater payload-range than the similarly powered Fairchild Hiller F-228 and, despite higher permitted operating weights, an equally good airfield performance is claimed. An unusual over-wing engine location is chosen that should have the advantages of reducing wing bending moment yet be fairly high off the ground without requiring a long undercarriage and imposing a high-level floor. The forward cantilevering of the engines gives rise to a fairly lengthy tail arm and so the large door for freighter versions would be aft of the wing.
CONVAIR 660 DATA
Powerplant: two 9,7301b-thrust Rolls-Royce RB.203-1 Trents.
Dimensions: span, 85ft 7.7in; length, 82ft; height, 31ft 4in; wing area, 815 sq ft; wing sweep (i chord), 19.5°.
Weights: gross, 62,500lb; max landing, 61,500lb; max zero fuel, 53,000lb; equipped empty, 35,750lb.
Accommodation: max seating, 88 at 34in pitch six abreast; total under floor volume, 580 cu ft.
Performance: FAR take-off balanced field length (ISA, s.l., g.w.), 4,400ft; FAR landing field length (ISA, s.l., max land wt), 4,200ft; payload-range, see diagram.

** Here are the photos - Larger versions are available at the links provided below **
http://www.flickr.com/photos/sdasmarchives/22683145958/in/ 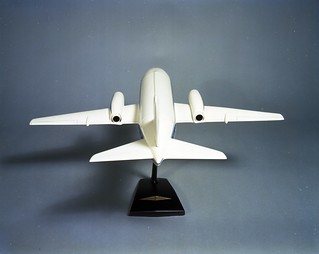 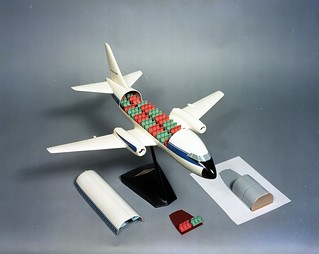 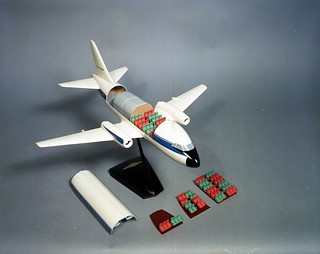 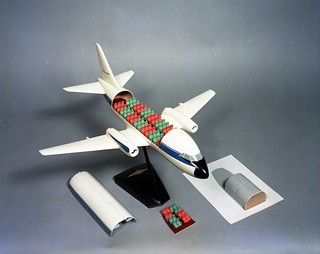 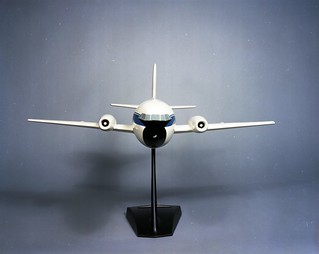 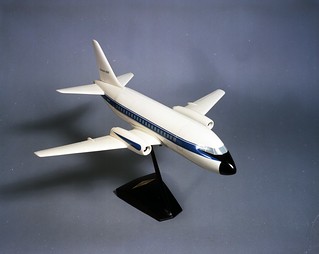 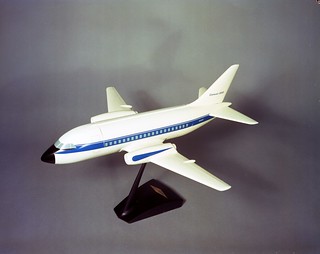 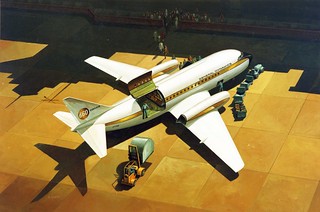 What for a cute Aircraft !
really sad it went not production.
S

Thanks a lot Boxman for bringing this to our attention.

There's a 3 page article about it in :

Interesting design. I wonder if this had the stretch potential to compete with the 737-200.
M

This is interesting, I would have thought that they wouldn't have been looking into building airliners that far down the road. A real shame this one wan't built. It would have been a fitting replacement for the Convairliners.

Here's the GA of the Convair 660, taken from an issue of Air International, unfortunately I haven't kept the reference!
As an aside, I was thinking that this could have stemmed from the Model 60 design from the late 1950s/early 60s

I'm guessing that the engine layout was driven by the perceived need to keep the fuselage close to the ground, which seems to have been a big consideration in most of the contemporary airplanes in this class (B737, DC-9, BAC111, Caravelle). I wonder if it turned out to be that important to the operators - how many airlines served airports where they couldn't afford to provide an airstair and cargo belt?
Contemporary Soviet short/medium range airliners (Tu-104,TU-124), designed to serve famously austere Soviet airports, sat much higher off the ground (of course this owed something to features inherited from bombers, with different loading/unloading modes).
Boeing has been paying for catering to this requirement for years with increasingly heroic measures required to allow growth of the 737. Operators of the Convair 660 probably would have had to accept the additional cost of providing earplugs for passengers.
Share:
Facebook Twitter Reddit Pinterest Tumblr WhatsApp Email Share Link