I have a list of designations that have not changed on my computer for some time. I am sure there must be more types I am missing. Its very frustrating because an online search for the name CASA brings up so many Spanish property websites! Add in C.A.S.A. and many sites interpret the full stop (period) as a wild card character !!

Construcciones Aeronáuticas SA (CASA) was founded by José Ortiz-Echagüe in 1923 and began work on a factory in Getafe in May 1924, building Breguet aircraft under license. CASA built a second factory in Cadiz in 1926 to construct a licensed copy of the German Dornier Do. J Wal seaplane. During the Spanish Civil War the CASA Getafe factory was located in the Republican zone. It was moved to Alicante, another opened in Sabadell. At the end of the war production returned to Getafe. After the Spanish Civil War, CASA opened a new plant in Tablada in Seville.

CASA was one of the original members of the Airbus Consortium with France, Germany and the United Kingdom in 1972. From 1999 known as EADS CASA with the organisation integration into the EADS group.

CASA I [1929] Built the first aeroplane designed exclusively by CASA, the CASA I.

CASA 1.133 Jungmeister [1936] This was a single-engine, single-seat biplane of wood and tubular steel construction and covered in fabric. Version of the Bücker.Bü 133 advanced trainer as the E.1 in Spain.

CASA 352 A license-built version of the Junkers Ju 52/3M Tri-motor with BMW 132 radials built under licence by Elizalde SA. At least one had an indiginous Elizalde engine fitted in the nose.

• CASA C-101EB-01 An initial Spanish Air Force order for 88 machines was placed, a dedicated trainer version designated C-101EB-01 by CASA and E.25 Mirlo ("Blackbird") by the air force. The first aircraft entered service on 17 March 1980.
• CASA C-101BB-02 A combination attack/trainer with an uprated engine designated bought by Honduras, Chile, which bought four aircraft and received parts for another eight assembled locally by ENAER. All Chilean BB-02s were designated T-36 Halcón ("Falcon").
• CASA C-101CC-02 In 1983, CASA flew a dedicated attack version ordered by Chile. Only the first example was built in Spain, with the remaining 22 machines built by ENAER. This variant featured an engine upgrade and increased fuel capacity and was designated A-36 Halcón ("Falcon").
• CASA C-101CC-04 Similar aircraft to the C-101CC-02, for Jordan.
• CASA C-101DD Demonstrated by CASA in 1985, with improved avionics and Maverick air-to-ground missile. No sales interest or orders.

CASA C-102 [1977] Military trainer aircraft designed in Spain in 1977 but never actually built. It was a conventional all-metal monoplane with a T-tail, fixed tricycle undercarriage and side-by-side seating for the pilot and instructor.

CASA C-201 Alcotán [1946] Developed from a design started by Instituto Nacional de Tecnica Aerospacial Esteban Terradas as the INTA-20 design. A low-wing 10 passenger aircraft. Fitted with two 450 hp radail engines for use as a military transport and navigational trainer. The idea was to use Spanish engines. The CASA continuation of the project led to a tail wheel design with the option of two Armstrong-Siddeley Cheetah or Elizalde (later ENMASA) Sirio S-VII-A engines.

CASA C-209 Super Azor Pressurized airliner project with two Napier Eland engines. Design carried on by Hamburger Flugzeug Bureau in Germany as the HFB-209 when the Spanish Government decided they could not afford to proceed with the CASA design. Se also http://www.secretprojects.co.uk/forum/index.php/topic,2062.0/highlight,hfb-209.html

CASA C-212 Aviocar [1971] A turboprop STOL medium transport twin-engine aircraft designed and built in Spain for civil and military use. C-212s are also produced under licence in Indonesia by Indonesian Aerospace, formerly called IPTN but now known as IAe. The Aviocar name was dropped when CASA joined the EADS group. Available as the Casa C-212-100, 200, 300 and 400 base airframe from which there are a number of sub-variants. 26 March 1971 saw the prototypes first flight.

CASA C-213 Development of the CASA C-212 with a pressurised cabin. Two turboprops.

CASA SF-5A [1965] Single-seat fighter version of the F-5A for the Spanish Air Force; built under licence in Spain by CASA.

CASA SF-5B [1965] Two-seat training version of the F-5B for the Spanish Air Force. Built under license in Spain by CASA.

CASA SRF-5A [1965] Single-seat reconnaissance version of the RF-5A for the Spanish Air force; built under license in Spain By CASA.

CASA AX [1986] Transonic attack aircraft, one EJ200 egine without afterburner. Design included some stealthy features. Work started on the AX in 1986 and ended the development phase four years later.The first flight was due in 1992 with the first series aircraft operational in 1996. Plan was for 72 aircraft as a Northrop F-5 replacement to complement Eurofighters in the Spanish Ejército del Aire. CASA tried to find cooperation at MBB and Dassault. The AX very first concept was twin engined.

CASA ATX Advanced fighter trainer project. Project was funded by the Spanish Government for the feasibility study which started in 1989. The role of the ATX was to supersede the F-5 from 2004. It was to be powered by F-404 or ET2000 or similar engines.

CASA C-3000 Twin engine passenger transport similar in configutation to the Saab 2000 civilian short haul turboprop. Project was cancelled in 1994 due to the fact the market share was negligible.

I'll see if I can add something
S

As a person mainly specialized in American aircraft, and then Japanese, Soviet and British aircraft (all of which represents quite a lot already!), I am highly admirative of the fact that you have lists for so many different manufacturers and countries, Cy-27... A tip of the hat to you!
C

Two examples made by CASA.

There was also one CASA (Dornier) Do.R Super Wal, christened "Numancia", the first aircraft built by CASA built by CASA's seaplane factory in Cádiz.
After that, a total of 27 Do.J Wal were built according to http://www.airbusmilitary.com/Company/CompanyHistory02.aspx
(Other sources give slightly different numbers.)


Cy-27 said:
CASA I [1929] Built the first aeroplane designed exclusively by CASA, the CASA I.

The designer of the CASA III was Luis Sousa Peco. (There was a mistake in the Wikipedia entry.) I've never heard of the CASA I or CASA 1933 model, and I'd be interested to know the source. José Aguilera Cullel was main engineer at the CASA works. All references to a plane designed by Sousa and Aguilera seem to correspond to the CASA III.

Same remark Hesham, I'd like to know the source for the CASA I, II, IV, V.

The history page by Airbus Military says that "the company started working, in 1928, on the development of its own first light-plane prototype called the “CASA-III”, as it was the third of a series of concepts, with the others having been discarded."
http://www.airbusmilitary.com/Company/CompanyHistory02.aspx
This might imply that there were CASA I & II unbuilt projects, but it does not say anything of their characteristics.


here is the source; http://1000aircraftphotos.com/Contributions/Visschedijk/8390.htm
C

hesham said:
here is the source; http://1000aircraftphotos.com/Contributions/Visschedijk/8390.htm
Click to expand...

Thank you Hesham.
I've also found this page:
http://html.rincondelvago.com/industria-aeronautica-y-espacial.html
It mentions CASA VI, VII and X but I wonder how reliable it is.


and of course they are real designs,I displayed before a project to CASA
from 1933,and according to your source,may be it was CASA VII (1933);

Interesting picture, where does it come from?
But I can't see the difference with the CASA III designed by Sousa, like in the picture below.


the source for this project is a Spain magazine.
C

Pictures and information on the CASA III:
http://www.aviationcorner.net/gallery_en.asp?aircraft_type=CASA%20III
Juan Gonzalez says that there were two projects CASA T-1 and T-2, and one prototype of the T-1 was built as CASA I. Then up to 9 CASA III were built.


I know many of them were a projects.
S

From Aeroplano #23, the designations pertaining to the C.207 Azor program:

hesham said:
I displayed before a project to CASA
from 1933,and according to your source,may be it was CASA VII (1933);
Click to expand...

The wooden model is definitely the CASA III. The picture appears in Aeroplano no.22, in an interview of José Aguilera Cullel. The text gives no doubt that "Casa-Sousa" means "aircraft designed by Sousa and built by CASA". In the interview, Aguilera says that about a dozen were made.
Adrien

The CASA X was a cabin version of the CASA III. One prototype was almost completed but construction was halted at the outbreak of the Civil War.
Source: article on the CASA III by Angel Sanchez in Cuadernos de Aviacion Historica no.4.

can you give this CASA aircraft a name? 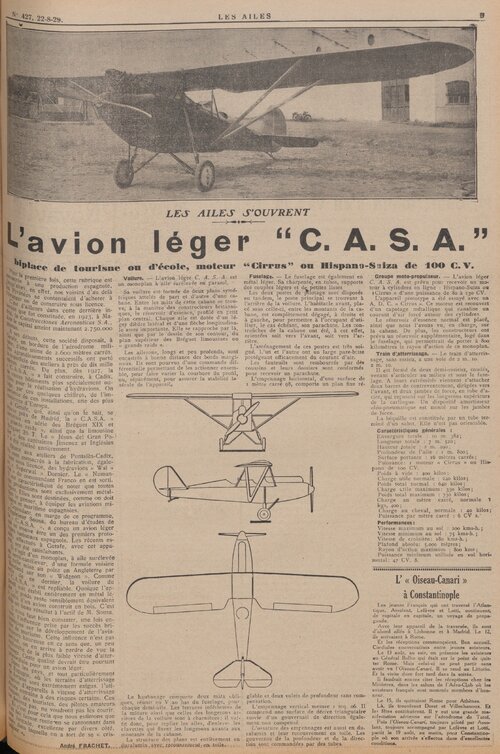