Being unfamiliar with WW2 projects, what is this tailless Consolidated Vultee bomber (?) design?

Tailless Twin-Engine Patrol Studies (1943): possibly a proposal for a PV-1 and PV-2 replacement won by Lockheed with its P2V Neptune.

Heh - I haven't opened my copy of that yet!

Interesting. Never come across this project before.

This might be old news by now but ... according to Alan Griffith (aka ACResearcher), there were at least three proposals for Consolidated flying wings. The first was a Sept 1941 twin-engined bomber wing a 130 foot span for the USAAC. This variant was later pitched to the US Navy as a "so-called 'Patrol Bomber', Consolidated designation P5Y1". Consolidated was quite persistent with their 'P5Y1". A 1944 brochure for a "Performance Report Two Engine Patrol Landplane Tailless Type" appeared on eBay"

"Another variant was to have a wingspan of 134 feet with a gross weight of 90,000lbs. This version was tested in GALCIT wind tunnel in 1943." This would be the version illustrated here.

According to Claus Reuter (The Development of the Heavy Bomber 1918-1944, page 61), the final, 180 foot span concept was to have each of four buried turbocharged tractor engines driving its own counter-rotating propellers through extension shafts. This bomber would have been highly loaded but control on landing was to be aided by full-span flaps and retractable horizontal tail surfaces.

A bit more ... attached are specs and a three-view drawing from that 1944 brochure from eBay.

Powerplant was to be twin Pratt & Whitney R-4360 Wasp Majors but span is listed as 147 feet (whereas Alan Griffith suggested that this was to be based on the 130 foot span Army bomber's airframe).

More images of that project:

And the four-engine variant:

A splendid painting by Daniel Uhr: 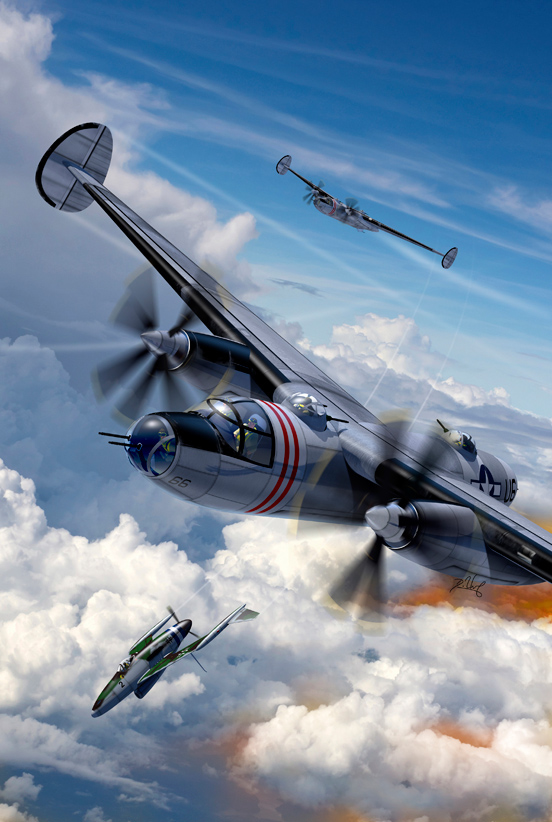 The artwork by Daniel Uhr is the cover art from American Secret Projects: Fighters Bombers and Attack Aircraft, 1937-1945 by Tony Buttler and Alan Griffith, Crecy Publishing Ltd, Copyright 2015. I worked very closely with Daniel as he created this beautiful rendition. As one who is extremely pleased to be able to occasionally freehand a straight line I can only be in awe of folks who can come up with such art.

I have a substantial amount of information on these Consolidated tailless bomber projects in my collection, including the document to which Apophenia refers above as well as a number of NACA test results, proposals to the military, etc. I will be going into depth on these aircraft in a future publication.

I suppose that be unsterstood that Tailess formula for Bombers was highly problematic .
I

Hi is there anymore information on this aircraft, thanks

Ian Allen said:
Hi is there anymore information on this aircraft, thanks
Click to expand...

From Convair Advanced Designs volume one.

It would be good for you to mention the author of these books, in this case my friend Bob Bradly - an excellent researcher and a fine gentleman.

I will say I found a tremendous amount on all these aircraft in various archives before I met Bob, but he generously shared his wisdom with me on a number of projects.