On another forum (http://sussexhistoryforum.co.uk/index.php?topic=16410.0), there is an interesting topic concerning Worthing resident George Clout's Air-ship of 1904. It comprises mainly an article which appeared in the Worthing Gazette of 3 August 1904. The article includes what appears to be a photograph of a model of the projected air-ship (although the article describes the subject of the photograph as 'his serial machine'). It's of poor quality but it's reproduced below. The article elaborates upon the photograph of George Clout's air-ship in the following terms:

'From the photograph it will be seen that above the car are two wings, or aerial planes, measuring thirty feet from tip to tip; and these revolve above the operator’s head, and immediately over the petrol motor which supplies the motor power. These are designed to lift the car from the ground and sustain it in the air. There are two propellers driven by the same motor, and one of these is attached to each wing, their purpose being to drive the machine in a horizontal direction; but it can be propelled forward independently of these by altering the balance of the car. The angle of the wings can be regulated while flying, at the operator's wish, to meet the atmospherical conditions. Affixed to the rear of the car is a tail for steering the machine in any direction. By a simple contrivance the frame of the car can be enveloped in descending, thus converting it into a parachute some thirteen feet in diameter, a provision the value of which will, in case of derangement of the mechanism, be immediately recognised.'

The air-ship appears to have been some form of helicopter. Mr Clout said that the projected full scale air-ship was to have a framework composed of light steel tubing and wood and when fully equipped would weigh about 350 lb. Mr Clout goes on to say that by the use of aluminium or some other light metal the weight could probably be reduced by one-half and also greater rigidity would be imparted to the frame.

It is said that the air-ship was the result of thirteen or fourteen years' study of the problems of aerial navigation on the part of Mr Clout (whose daytime job was that of a plasterer). Mr Clout also said that during his prolonged experiments he had become acquainted with many and varied designs for airships, but he had seen nothing yet that promises success. He added that he had a quiet confidence in his own invention, which led him to put forward its manifest claims in the hope that it would enable him to continue his investigations into the mysteries of flight.

It seems that the Worthing Gazette published another article concerning Mr Clout's air-ship a year before that extracted above but I haven't seen that article.

There is not much on the internet concerning Mr Clout's air-ship. The little that there is comprises http://flyingmachines.ru/Site2/Crafts/Craft29531.htm, https://helicoptermaintenancemagazine.com/article/dinosaurs-and-giant-butterflies-1493-–-1907-legacy-leonardo-davinci and https://sites.google.com/site/stingrayslistofrotorcraft/clout-helicopter and a marginally better photograph of it. Does anyone else know anything more about Mr Clout's air-ship project?

It seems certain that this was never more than a project, and its only tangible evidence was the model, as within two years George Clout was dead. In November 1905 he travelled to Montreal and from there to New York. It was en route from there to the UK that he died and was buried at sea in May 1906. 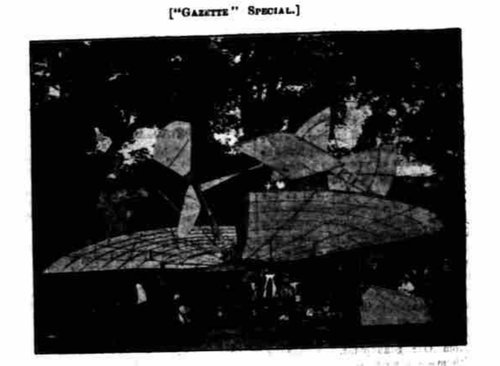 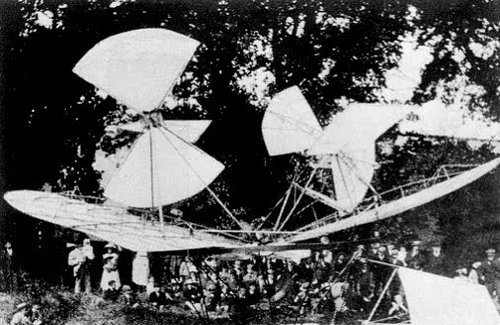 In British Aircraft Before the Great War, Goodall & Tagg, they say that Clout applied for a patent for the machine "A Mechanical Air-Ship" in 1903, No. 13 075/1903, and this is indeed noted in the Aeronautical Journal. However I cannot find any patents in his name.
Last edited: Nov 2, 2019
A

The article can be downloaded from the British Newspaper Archive, but for those of us outside of the UK, you'll need to first get past their horrendously expensive paywall.

George Clout's flying machine had also been profiled in "Scientific American" - March 24, 1906 (link here). The text appears on pg 253, the photograph at the bottom of pg 254.

"A distinctly novel type of ﬂying machine is what may be called a revolving aeroplane apparatus. This is shown at the bottom of the next page. It consists, as may be seen, of two triangular wings inclined somewhat with the horizontal, and suitably mounted on rollers on a circular track. The track is supported upon a framework of steel tubing, within which the operator is supposed to sit. Mounted upon the wings are two propellers which are driven by belts from a motor placed at the base of the wings and also mounted on the same frame with them, the idea being that the wings, driven by the propellers, will revolve rapidly and lift the machine in a vertical direction.

After it has attained the desired height, the operator can tilt it by moving his body toward the rudder, and thus can cause it to move forward as well as rise. A parachute can be carried within the circular frame and opened in case the machine falls. The photograph is of a model constructed of oak, bamboo, canvas, and steel tubing for the purpose of showing that the machine could be built on a large scale. The wings are 30 feet across and they have a periphery of 27 feet. The rudder was about 7 feet long and the propellers about 10 feet in diameter. The total weight of the machine was in the neighborhood of 300 pounds, and it was fitted with a light air-cooled gasoline motor of 3 3/4 horse-power, weighing some 50 pounds. This machine is the invention of an Englishman, Mr. George Clout, whose present address is 234 West 14th Street, this city [New York]. He has spent some ﬁfteen years working out this idea and is desirous of interesting capital for the purpose of building a practical machine along these lines."
Click to expand... 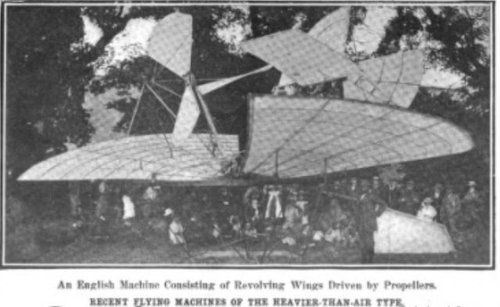 The helicopter is described as a "model", which today would be akin to saying that it was a proof-of concept demonstrator.

Thank you, Schneiderman and Paul. Also being non-UK resident, I will ask a friend who is, and subscribes to he BNA archive, to source the 1903 Worthing Gazette article from that.
Last edited: Nov 3, 2019

Below is the article which appeared in the Worthing Gazette of 12 August 1903. It suggests that Mr Clout was prescient concerning the principles of aerodynamics, particularly those of rotary wing aircraft. 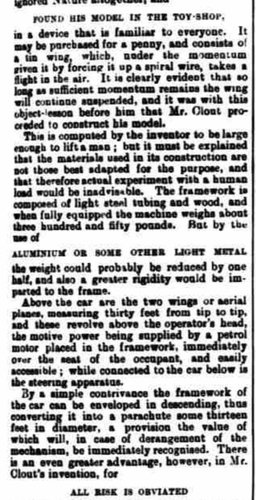