This Italian factory designed some biplane trainers.[/size]The following numbers are known: C-1, C-2, SC-4 and SC-5About number 3 nothing known.If you have something about the above mentioned 4 types please let me know, everything is welcome.Jan


for the number 3,it was Caproni/Bergamaschi PL-3 low-wing cantilever monoplane
racer,powered by one Fiat A.59 engine.

Thanks
Yes this was an unlucky aeroplanes special designed for the London-Melbourne air race, but not used for it.


But what about these 4 biplane types?

The other types,first two are well known;


and for the other,I will search about them,I remember that I saw their
pictures in Internet.
J

The last two were later build as Breda.


An other question do you know some one who can help me with the old Italian magazine Aeroplani d'Italia?

The Bergamaschi P.L.3 was designed for the London-Melbourne race, but was one of the unlucky aeroplanes who has not started.[/size]Who can help me with all kind of information/materials concerning this aeroplane?

Google is your friend, Jan. I turned this up in 30 seconds. Cheers, Matthew

I think we most merge those topics;

Thanks so far concerning the P.L.3[/size]But I have difficult one:Who can help me with:Impression of the the fusselage construction, wing construction, landinggear details and the cockpit lay outThanks and have a nice christmas and all the best for 2013Jan

As it says in the wikipedia entry Jan, the P.L.3 had a low wing built entirely of wood, covered with plywood, tapering uniformly both in chord and thickness from wide, deep roots to rounded tips. The tail was conventional, the tailplane set at mid-fuselage with straight swept leading edges and carrying elevators with trim tabs. The fin was triangular, with a rounded rudder ending above the fuselage.
In contrast the fuselage of the PL.3 was mostly of metal construction. From propeller to aft of the wing root the fuselage was a tube of constant diameter, set by the wide chord NACA cowling around its 525 kW (700 hp) licence-built Pratt & Whitney Hornet radial engine (which was designated as the Fiat A.59) which then tapered to the tail. The underlying structure from nose to tail was a rectangular chrome molybdenum steel frame, aluminium covered in front and plywood behind. The low profile cockpit placed the crew at the wing trailing edge. The PL.3 had a conventional undercarriage with mainwheels retracting rearwards into the wing, leaving a small part exposed. (Presumably to allow for a reduction in damage should it force land with wheels up).
Although it never entered the MacRobertson race it was tested by the Regia Aeronautica before finally being scrapped.
All comments in brackets mine. Here's some pics of the P.L. 3. Of note is the first which shows the partial exposure of the main undercarriage wheels. 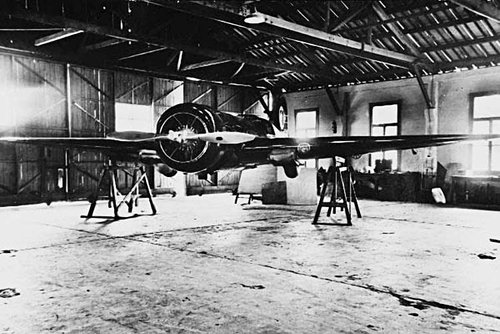 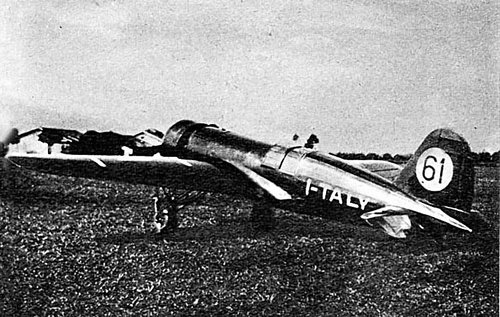 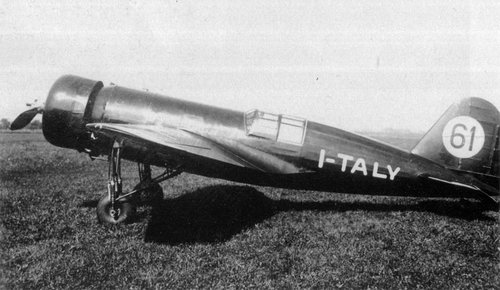