here is a NASA report about strange Canadian tailless glider aircraft,I never saw
like it before and I can't ID it.

Link's not working for me...

I'm sure I've seen it before.
To me it's almost as if it has Burnelli written all over it!

This aircraft was a carry on from previous work done at Westlands in the UK, using some ex-Westlands senior staff, and was known as the Pterodactyl VII. Good summary at http://www.canadianwings.com/Aircraft/aircraftDetail.php?NRC-Pterodactyl-258 . Testing was supported by the RCAF, but as far as I can determine the aircraft was always the property of the NRC, which at the time belonged to the Treasury Board, not the DND. No civil registration or military serial ever marked, as far as I can tell.

Thank you my dears.
S

Thanks a lot for this, Bill!


Bill Walker said:
This aircraft was a carry on from previous work done at Westlands in the UK, using some ex-Westlands senior staff, and was known as the Pterodactyl VII.
Click to expand...

And that's why I hate roman numerals. Why couldn't they just say 8?

Okay, here's some more, from the 'Aeroplane' article...
The project was originally proposed by Professor G.T.R.Hill, of Pterodactyl fame, and Hill made the preliminary studies. Detail design was by NRC staff, under the leadership of G.S.Levy and Thor Stephenson. Professor Hill was British Scientific Liason Officer to the NRC at the time.
The aircraft was originally to be a 1/3 scale powered model, but evolved into a full-size glider.
Construction was of wood, but the wing surface was covered in a laminated plastic layer, to give a smooth surface.
The wing was fitted with rotating tip sections, for trimming purposes, and tip mounted fins and rudders. Two sets were constructed, one with a symmetrical section, the other with a cambered section. Control was via elevons, and split flaps were fitted, hydraulically operated. The tricycle undercarriage was retractable and fitted with brakes.
The glider was first flown by the famous Austrian sailplane pilot, Robert Kronfeld in the summer of 1946. After 30 hours flying, the aircraft was modified; the one piece canopies were replaced with fixed windscreens and sliding canopies, the main wheels were moved aft, to correct the centre of gravity, and retactable skids, to prevent a nose over during a wheels-up landing, were fitted in bulges under the wing leading edge.
Flying behaviour was considered good, although there were problems with flow separation around the separate canopies.
The major problem was that only 20% of a flight was considered useful testing time, along with the fact that a tug and crew were also needed.
After the test program ended, the glider was abandoned in the open, deteriorating until finally broken up in the mid 1950s.

Fantastic! Thanks a lot for filling us in on the last Pterodactyl of the dynasty (which also looks like a twice-remote cousin of the Armstrong Whitworth A.W. 52!).


but that's very strange,in that site we found Pterodactyl MK VIII is different aircraft
even MK VII was also different ?.

The NRC glider was simply called "The Wing"...
The "Pterodactyl VIII" in Hesham's last post is the Short company proposal to the Brabazon Commitee post-war civil transport aircraft studies. This project was equiped with 5 Griffon pusher engines and a "quilted" pressure cabin.

Thank you my dears.

...and was known as the Pterodactyl VII.
Click to expand...

The aircraft was originally to be a 1/3 scale powered model, but evolved into a full-size glider.
Click to expand...

I take the second sentence to mean that the original plan for what became the NRC Glider was to be a 1/3 powered scale model of the Pterodactyl VIII airliner concept, but that this plan was dropped, the aircraft then being built as the NRC glider.

That's also what I think Robin — despite the difference in shape of the wing's trailing edge. Thanks for your comment!

robunos said:
I take the second sentence to mean that the original plan for what became the NRC Glider was to be a 1/3 powered scale model of the Pterodactyl VIII airliner concept, but that this plan was dropped, the aircraft then being built as the NRC glider.
Click to expand...

Can I suggest that this is probably incorrect? The Pterodactyl VIII airliner was the last of the prewar projects by Westland Aircraft and it did not last long. The NRC plane was purely a research aircraft with no immediate follow-up project in mind. It is sometimes referred to as, or confused with, the Pterodactyl VIII but as far as I can tell this appears to be a recent Internet meme with no historical foundation.

Although this artwork carries on with the wrong assumption of the Pterodactyl VIII designation, hope that does not spoil looking at this. 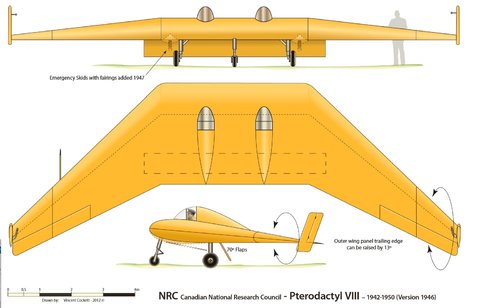 A few thoughts if I may.

The story of the one and only piloted aircraft capable of flying built in the workshops of the National Research Council of Canada (NRC) began in 1942. That year, Geoffrey Terence Roland Hill became the scientific liaison officer between the United Kingdom’s Ministry of Aircraft Production and a Canadian counterpart, the Department of Munitions and Supply.

Fascinated since the early 1920s by the development of tailless aircraft, some of which were manufactured during the 1920s and 1930s, under the name Pterodactyl, this aeronautical engineer obtained from NRC that his most recent concept, a transport aircraft, the Pterodactyl VIII perhaps, be tested in a wind tunnel. At this time, indeed, efforts to maximise the performance of aircraft of various types was sparking renewed interest in tailless aircraft, or flying wings, in the United States and United Kingdom.

In early 1943, NRC considered carrying out Hill’s project using a scale model capable of flying. The British engineer succeeded in convincing it of the usefulness of building a piloted glider to study the flight characteristics of the new tailless aircraft. Since the project did not have a very high priority, the Royal Canadian Air Force (RCAF) was opposed to an aircraft manufacturer building this prototype. The NRC Associate Committee on Aeronautical Research approved in November 1943 the construction of two two-seater wooden gliders that reproduced on a 1/3 scale the transport plane imagined by Hill.

Manufactured in Ottawa, in the NRC’s Structures Laboratory during the summer and fall of 1945, the NRC Glider or NRL (National Research Laboratories) Glider only flew in the spring of 1946, at Namao, an RCAF station near Edmonton, Alberta. Construction of the second glider appears to have been abandoned before it even began. That said, in September 1948, a transport plane towed the NRC Glider from Namao to Arnprior, Ontario, with a few stops along the way - a 3,700 km (2,300 mi) flight that was among the longest ever. With the craze for tailless planes drawing to a close, the glider was put away over the next few weeks, before being scrapped in the mid-1950s.