Hello friends,
surfing on the web I've found a website with some mistery aircraft: (http://s7.invisionfree.com/MARCMAP_Forum/ar/t934.htm)
The aircraft was eventually identified as Brunelli CBY-3 Loadmaster built by Canadian Car & Foundry.
The white star in blue roundel probably says it was a military type, but I'm not aware of a CBY series.
Sometime canadian designations are derived by a corresponding US designation with a C prefix, but I don't believe this is the case.

and of course http://www.burnelli.com/
;D

Thank you, dan_inbox.
Lot of very interesting stuff. I realize that CBY wasn't a military designation, but, after all, the clue that Y could mean "Consolidated" or "Convair" wasn't too far from the reality...
I discovered this forum only recently and I have still to read most of the topics.

The CBY-3 "lifting fuselage" was an evolution of the earlier Burnelli UB-14. Burnelli worked as a designer at Canada Car and Foundry Co. in Montreal and the CBY-3 was built for bush operations in northern Canada. The sole prototype was extensively tested but failed to gain a production contract.

Burnelli had a lifelong career devoted to exploiting the advantages of a lifting body airfoil concept that characterized many of his earlier aircraft designs. His last design, the CBY-3 was manufactured by CanCar in Montreal, but reverted back to Burnelli, when the CBY-3 was unable to gain a production contract. The name of the aircraft, CBY-3, was derived from the name of the three partners involved in its creation: CanCar, Burnelli and Lowell Yerex and “3” from the number of partners involved. Lowell Yerex was a New Zealander who had formed TACA – Transportes Aéreos Centroamericanos (Central American Air Transport) in Honduras in 1931, and joined the project when Burnelli convinced him that the CBY-3 could be used as both a cargo and passenger aircraft.

Originally registered "CF-BEL-X" while still in the experimental stage, this one-off, twin-boom, aerofoil-section fuselage, high-lift airliner garnered significant interest from the industry. "CF-BEL-X" underwent rigorous testing and proving flights designed to show off its potential. Despite a trouble-free test program and glowing accolades from the press and industry observers, no production orders resulted and the prototype was later sold in the US as "N17N."

Moving to Southampton, N.Y., Burnelli remained tireless in his determination to promote his airfoil-shaped fuselage transport planes. In 1955, he adapted the CBY-3 to carry an expedition of 20 passengers and 41 sled dogs, along with their equipment, to the North Pole, but the enterprise was canceled.

The Loadmaster continued to fly regularly as a commercial airliner both in northern Canada and South America; acquired with design rights by Airlifts Inc. in Miami, Florida, it went to Venezuela, and returned to Burnelli Avionics for refitting with Wright R-2600 engines, finally ended its flying days at Baltimore's airport in Maryland.

I hope this helps

David, any idea why the Loadmaster prototype didn't end up with TACA?

Was Cancargo an attempted rebranding for CanCar? Or just for the Burnelli?

Apophenia said:
David, any idea why the Loadmaster prototype didn't end up with TACA?

Was Cancargo an attempted rebranding for CanCar? Or just for the Burnelli?
Click to expand...

First, are you a CAHS member?

I wrote the original article on the CBY-3 in "Flypast", the Toronto Chapter newsletter, when Nes Dobson talked about the CBY-3.

"In late 1945 came the news that TACA was in receivership, and had to drop out of the project. CanCar decided to go about marketing the aircraft itself, and flew CF-BEL-X throughout Canada and Central and South America. While the concept of the aircraft was appealing, the CBY-3 did not generate any orders. In the Spring 1947, the CBY-3 returned to Canada and was re-engined with more powerful 1,450 hp Pratt & Whitney R-1830-94 Twin Wasp radial engines. Unable to secure any passenger airliner orders, CanCar switched gears and decided to promote the aircraft as a cargo plane. CanCar formed a new subsidiary – Cancargo Aircraft – to promote the aircraft, and the CBY-3 was renamed as the Loadmaster. The Loadmaster was flown – again – throughout Canada, mostly in the northern regions, to promote the “bush flying” aspects of the plane. Although the load capability was found acceptable, the Loadmaster’s inability to land and take-off on snow made its operation in these environs questionable. CanCar went as far as to offer the Loadmaster to both the RCAF and the USAF as military cargo transports. While both forces were mildly interested, no orders were forthcoming."

As for CanCar, this is an abbreviation of Canadian Car and Foundry, and while they built it, Vincent Burnelli designed it, so it is generally referred to as the CanCar Burnelli CBY-3 Loadmaster.

BTW, did you know it still exists?

saturncanuck said:
BTW, did you know it still exists?
Click to expand...

New England Air Museum in CT has it on display. It's in serious need of repair, or at least it was as of late 2007.

I'm not a CAHS member so I appreciate these clarifications -- especially the Cancargo Aircraft rebranding that now makes perfect sense.

I guess TACA being in receivership in 1945 explains both why they dropped out of the project and then suddenly pop up again in El Salvador.

I did know that CBY-3 still existed and in sad shape but I didn't know that it was as rough as that!

Apophenia said:
I'm not a CAHS member so I appreciate these clarifications -- especially the Cancargo Aircraft rebranding that now makes perfect sense.

I guess TACA being in receivership in 1945 explains both why they dropped out of the project and then suddenly pop up again in El Salvador.

I did know that CBY-3 still existed and in sad shape but I didn't know that it was as rough as that!
Click to expand...

Yes, it is sad. Mind you, shes in better shape now than when I saw her, as she didn't have her wings attached then. Apparently, she was in limbo over who owned her for years and that's why she deteriorated for so long.

Updating an old thread...here's the latest on the restoration of the Burnelli CBY-3 Loadmaster at the New England Air Museum in Windsor Locks, Connecticut, USA. NEAM is definitely worth a visit as it's one of the best small aviation museums I have ever visited, especially but not exclusively for helicopter buffs as it has many Sikorsky, Kaman and even Doman types given the Connecticut roots of those companies.

I had a chance to visit NEAM yesterday and thanks to a fellow member over at homebuiltairplanes.com, I was able to join a private tour of the restoration facility dominated by the multiyear effort to bring the long-neglected CBY-3 back to life. There are still a couple of years to go but they are making steady progress and I was mightily impressed by the enormous efforts to preserve this unique aircraft even in non-flying condition.

Here are a few pics if of the fuselage (note interesting construction in "roof" closeup), cockpit and instrument panel (note custom gauge for six wing fuel tanks replicated by 3D printing) and landing gear (note massive trailing link). It was quite an experience to walk around inside this plane, which felt more like a little theater than the usual claustrophobic airliner tube.

And here are the left wing and tail assembly including the control surfaces fully restored and awaiting fabric covering. Note too the aluminum-plywood-aluminum sandwich construction of the doors and hatches awaiting reinstallation. The plywood was all rotten and replaced in the process of restoring what had become a derelict hulk. Truly an amazing effort....

And here is a rare color photo the CBY-3, a reduced-quality version of an image from the NEAM web site, itself a scan of a photo which is being used by the museum to help determine the final color scheme of the the aircraft when it goes on display.

The venomous conspiracy nuts haven't completely smashed my appreciation for this plane.
F

Some info on the CBY-3 can be found in a chatty text located at https://ingeniumcanada.org/channel/...-flying-boxcar-the-canadian-car-foundry-cby-3

The CBY-3 has been undergoing a lot more restoration in recent years and it was finally rolled out of the hangar last month. The wings are yet to be finished and attached. Looks fantastic in a fresh coat of blue and silver paint. 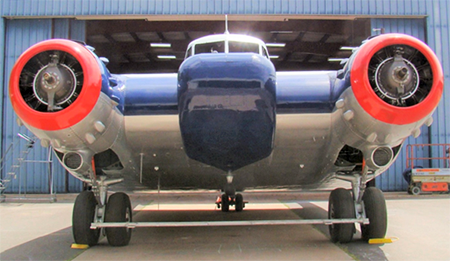 Does anyone know about the CB-43, a military aircraft based on the CBY-3? 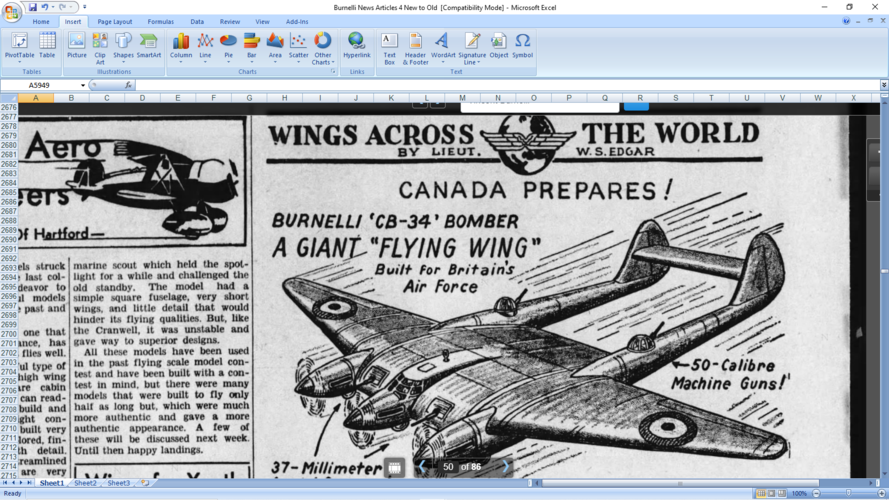 edas said:
Does anyone know about the CB-43, a military aircraft based on the CBY-3? View attachment 654924
Click to expand...

I point you at this page about the numbering... https://www.secretprojects.co.uk/threads/the-burnelli-designation-nightmare.27430/

You might be forgiven for thinking it was French from the cover of Model Airplane News in December 1939.