Two slim-fuselage versions of the Beaufighter,proposed but not built,were
designated Type 158.The would have been the Hercules VI-engined Mk.III
and the Rolls-Royce Griffon engined Mk-IV.

Unfortunately no illustrations found yet.
S

I've looked for these off and on for years. Sometimes extra small details appear (Tony Buttler's book British secret Projects 1935-1950 has a summary) but never any drawings ... ...
I hope someone can find something.

the Bristol "Beaufighter Mk.III" should be the "sports model" version of the "Beaufighter" design! Anybody of you have a drawing or a 3view of this version?
Click to expand...

Anyone had any luck yet? Even an impression of what it would have looked like would be interesting.

A came across the designation "Beaufighter III", too, quite a while ago and without success, too !
But if it's described as a "sports model" and "slim fuselage" version, I can only imagine, that it would
have been a single seat version, as to my opinion, the fuselgae of the Beaufighter already was quite
narrow even in the standard version. Deletion of the second crew member would have allowed to cut
down the rear fuselage and so to use a kind of bubble canopy, maybe while retaining windshield and
parts of the sliding hood, in order to minimise changes to the production line.
IF produced, later a true bubble hood could have be incorporated, as it was the case with the Hawker
Typhoon. But of course, we have long left firm ground now and are walking and really thin ice ! :

A second crew member would be needed to operate the early radar. Tandem seats?
but tis and Jemiba's post are speculative. I keep looking, but haven't found any drawings yet.

"..be needed to operate the early radar. Tandem seats?"

Dehavilland was able to squeeze the radar operator into the slim rear fuselage
of the Hornet, too, but in fact, if a second seat was needed, I cannot see any sense
in changing the fuselage at all. Is there any mention of the Beaufighter III as a night fighter ?
(Sorry, have my books not to hand in the moment..)
S

Some quotes from Wm Green's Warplanes of WWII Fighters vol2 re Beaufighter
"Conceived within a month of the Munich crisis" [29 Sept 1938]
First flight July 17 1939; to RAF squadrons July 1940; first kill (radar directed) Nov 11 1940
"While priority was given to the re-equipment of the night-fighter squadrons with the Beaufighter, a pressing need had arisen for long range day fighters in the Western desert and a number of machines were hurriedly fitted with desert equipment in the autumn of 1940." [chiefly long-range fuel tanks - initially a Wellington tank on the fuselage floor]
Early in 1941 a variant was evolved specifically for Coastal Command for shipping strikes....

"Further attention was given in 1940 to the type 158, a slim fuselage version first proposed late in 1938..." (Beaufighter III)
[The slim fuselage variant at that time (1938) must have been a new fighter fuselage, but an essentially Beaufort fuselage was adopted to save time both by using available components and avoiding redesign. The later 'rethink' was presumably a quest for greater speed, the Beau in its early production versions being rather slower than hoped]

On that time-scale, what else but a night-fighter? The Beau's use as a long-range strike fighter and torpedo carrier generally came later, with the faster Mosquito supplanting it as a night-fighter from 1942 onward.

Whether the Beau's fuselage was "already quite narrow" is a matter of opinion, but the Beaufighter used Beaufort components as far as possible, and in comparison with its contemporaries (Whirlwind, Gloster F9/37, Hampden, FW 187 and the later DH Hornet) it was hardly slim.

You're right, I was wrong, sorry ! I made a very rough measurement and the Beaufighter fuselage
even seems to be wider, than that of the Mossie, which had a kind of side-by-side seating.
I was somewhat misled by the cockpit, but the fuselage widens considerably in the lower part,
giving it a kind of a pear shape. So, of course, a slimmer fuselage would have been possible,
not just one with a lower rear part.
K

The main duty of the backseater in fighter variants of the Beafighter was to change the cannon drums. Without him, the amount of ammunition available to the aircraft would have been severely limited.

But at the time, the Beau III could have reached the squadrons, the belt feeding system for the
Hispano 404 probably would have been available.
S

Much more important for a strike fighter. For a nightfighter, you need to find your target before you fire the guns. Though radar improved rapidly, early interceptions were not easy routine.
K

Jemiba said:
But at the time, the Beau III could have reached the squadrons, the belt feeding system for the
Hispano 404 probably would have been available.
Click to expand...

It was never fitted to the Beaufighter as far as I am aware. They were all drum fed. Even the nightfighters.

Just a thought on the Beaufighter III rear fuselage. The Type 162 Beaumont was to use the Type 158 aft end. Does anyone have an illustration of the complete Type 162?

IIRC, twin fins for the Type 163 are also mentioned somewhere (presumably units like those test-flown on R2268). I assume that these were a later development.

On a semi-related note, does anyone know why the fin and rudder were moved forward on the Type 161?
S

There is a small (2in or so) side and front view of the Bristol 161 (between Beaufighter and Beaumont), and a small photo of the mock-up of the H7/42 slim fuselage Brigand TF 1, in the book on Bristol Aircraft in the Putnam series.
Unfortunately all I have is an old and faded photocopy.

Thanks Smurf. BSP has views of the Type 161 as well. It's amazing what a visual difference is made by moving the vertical tail forward!

BTW, does the 'Beaubomber' concept evolve into the Type 161? Or are they one and the same?

Initially Bristol came up with a recoil operated feed but it was rejected by MAP. A different feed with a compressed air motor was installed on R2055 for comparison with the 60-round drums on R2054. The drum feed was accepted by MAP as a temporary measure for the first 50 aircraft until the belt capacity could be increased from 120 to 240 rounds. The feed completed gunnery trials satisfactorily. Two other designs were submitted by AVRO and Hydran but Bristol's was felt to be better. Free French officers brought examples of the Chatellerault recoil operated feed and this was standardised by MAP as the Mk I feed. Its operation was similar to Bristol's original recoil operated feed but didn't work as well with AP cartridges. As a result the Mk I feed went into service on the 401st Beaufighter in September 1941, a year later than either Bristol feed.

I could not find any other Beaufighter thread, so I decided to post here.
Found on pprune :

An Australian Beau of Bristol manufacture (A19-2) was fitted with Wright Cyclone GR-2600-A5B engines as a precaution against the non availability of the Hercules. Was a one off as the Hercules supply from the UK was not interrupted. Performance was slightly less than a Hercules XVII powered aircraft.
Click to expand... 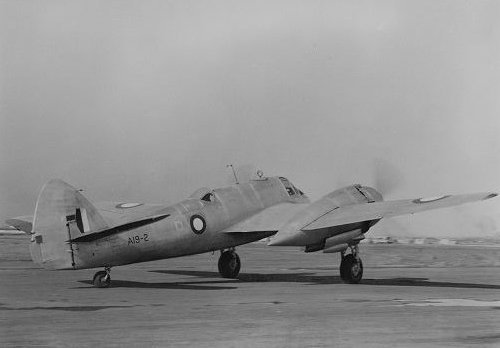 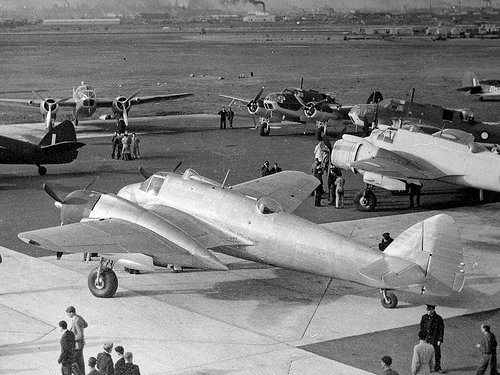