Some interesting VG projects from Breguet. Note the development of a particular VG form where the wing and tail form a locked delta wing planform in full sweep.

The last two images are from US Patent 3,292,881 by Breguet chief engineer, A G Ricard.


although I had the book; Les Avions Breguet 1940-1971,from 2007,but
your drawings are more clearance than the drawings from that book,thank
you. 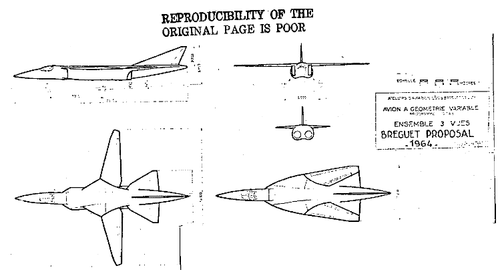 In 1963, the Technical Aeronautics Service requested ONERA to make a general study, both theoretical and experimental, on variable sweep design, and simultaneously requested the Breguet Company to undertake a preliminary design study on a multipurpose combat aircraft (Fig. 41). Shortly thereafter, a similar study was requested of the Dassault Company, which was to be followed by an order for a single-engine experimental prototype from this company, the Mirage G, in October 1965. This aircraft made its first flight 25 months later, and a large part of the flight envelope was explored in the following 2 months (beginning of 1968). The unquestionable success of this program and the speed of its execution demonstrate the solidity of a prototype policy based on experience gained with previous aircraft: in developing a new concept (variable sweep wing), the Dassault Company had actually reused most of the elements already tested in flight on the Mirage F2 fixed wing experimental aircraft (same PW-TF-306 jet engine, same fuselage with already qualified side air inlets and nozzle, and virtually identical pivoting horizontal stabilizers; see Fig. 8).
Click to expand...