What did the Type 3 requirement call for? From the information in that photo, I assume it was the requirement that lead to the Comet.

Wyvern said:
What did the Type 3 requirement call for? From the information in that photo, I assume it was the requirement that lead to the Comet.
Click to expand...

The title is the answer,I asked for the contenders ?!.

According to Key Aero:

According to the same article, aircraft like the Avro Tudor and Handley Page Hermes were part of this requirement. The requirement was split into 3A and 3B, for transatlantic and medium range routes, respectively, with 3A being designated for the Tudor and eventually, the Brabazon. The Comet also began to form part of the requirements.

Unfortunately, I couldn't find much about the unbuilt contenders, although I do remember that Avro tried to license produce the Constellation at this time, and it would have fit the requirements. Subject to hesitation, repetition and deviation from the outset, even the most generous soul would shy from claiming that the Brabazon Committee — experts tasked to recommend the best way forward for the development of British commercial aircraft after World War Two — had proven a success. On...

Richard Payne's Stuck on the Drawing Board is your friend.

Then recast as a medium/Empire route type (1,000nm stages).

For Type 3 Payne has: Avro 693, Armstrong Whitworth (unknown AW number), Airspeed, Miles X14 and X15.
693 won but BOAC declined to order two jet airliners and so was cancelled in favour of Comet.

Paywall has come down on the 'Airliner History' article.

Grey Havoc said:
Paywall has come down on the 'Airliner History' article.
Click to expand...

Really? It's still available for me, and I haven't even subscribed.

Could be a glitch with my browser triggering it, I'll try again later.

I wonder if the Scottish Aviation entry was the so-called Concord project that was to use a Liberator wing mated with a new fuselage. 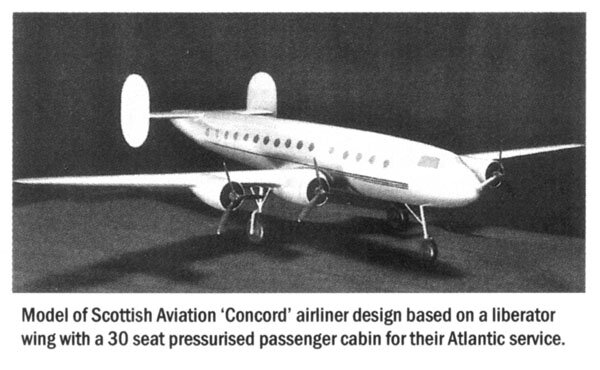 Luckily I am a subscriber to the Key Aero site so I can pass on the following:
Although Wyvern was partially correct in mentioning the Hermes, it was in fact the predecessor to that design, the Type 64, which had been offered from Handley Page. The Bristol entry was probably taken from the studies that led to the Type 167 Brabazon, although the early design used pusher props and had a butterfly tail a la Fouga Magister, Beech Bonanza, et al. The Brabazon itself, of course became the Type 1 proposal, without any competition. As far as the Tudor was concerned Avro ended up with a two-pronged approach whereby the Tudor I was fulfilling the Type 3A spec, whilst the Tudor II was expected to meet the Type 3B spec. In addition, to add to the confusion, it was also offering the Lancastrian. Yet two other possible aircraft that could be seen as Type 3A aircraft, in their original concepts, were the Blackburn Clydesdale and the Saro SR.45 Princess.
A

VictorXL188 said:
I wonder if the Scottish Aviation entry was the so-called Concord project that was to use a Liberator wing mated with a new fuselage.View attachment 661590
Click to expand...

They should have called it Liberation - LIBERator + ConstellATION

These specifications were not handled in the same way as pre-war due to the priority of military projects. They were never put out to tender but sent directly to companies that the MAP judged to have spare design capacity. They kept a firm hand on the activities of all companies and would penalise those that were deemed to be underperforming or in other ways failing to follow MAP instructions. However some companies did indeed carry out very preliminary work on designs to meet Brabazon Type requirements, or what they guessed those requirements to be. So your list of companies that tendered to 6/45 is not correct; it was simply awarded to Avro with just unofficial speculative ideas from the other two. Anything from the other companies you list would be even more speculative. However.......6/45 was abandoned and the requirement totally rethought, the Bristol Type 175 was then selected.
Last edited: Jul 27, 2021
F

The HP64, as a converted Halifax, was included in the recommendations of the Brabazon Committee under 'Converted Types'. These were considered as quick-to-develop stopgaps until the 5 new Types were ready for production. The Committee estimated 6 months to design, make and test a prototype (Halifax flying surfaces and new 40 passenger fusleage) and a further 6 months to prepare jigs and tools for production. They were somewhat deluded

Hesham: is tongue in cheek with the Q: did others Bid Type III? Which Type III? There were many.

Brab proudly stated in the Lords after Tudor was grounded that “my Committee never Approved Tudor”. Nor anything else. He had no Budget. Minister of A/c Production, Cripps, did. So, wef 8/8/44 did Lord Swinton (RAF/FAA “boss”, 7/6/35-12/5/38, funding the Expansion Schemes), as new Minister of Civil Avn, “owner” of BOAC). They, not Brab, decided who would do what. Other Ministers meddled. RAF “boss” SoS/Air Sinclair 28/8/44 requested Brab to address flying boats, helis, “private a/c”, cargo: only Bristol T.170 was funded R.Higham,Speedbird,Tauris,14,P60.

Brab's job was to gaze into Peace and guess who might want to pay how much to fly where. We might forgive him for being deluded (?2,000 civil Yorks!).

Cripps job was to put Brab's 5 Types into industry “without impairing the war effort”. He obtained delegated Authority 25/2/43 for modest Study spend on each, so the first award by Bristol East's MP was to a firm failing to make a simple adaptation, Buckingham, of a well-established small twin. He could not put Type 1 to proper people - Avro, HP, Shorts, V-A, who were all trying both to build Heavies NOW! and to evolve Supers for the Pacific.

He decided he could bring Avro into Type III Study 6/43 for XX 687 Civil Lincoln; he also ordered 2 prototype Silver Stirlings, 29/9/43, because he had bought Shorts 23/3/43, had declined all Super Stirlings, so had to find something for them to do.

Brab split Type III 11/43, the above as medium-range IIIA, and longer range IIIB, which Cripps placed as Study, Avro XXI 689, because UK+Canada had agreed, at 12/10/43 Commonwealth Conference on Air Transport, to collaborate to repel Pan Am, post-War, with the Howe-Balfour Aeroplane, named by Conference Chairman Lord Beaverbrook (1940 MAP) “Tudor”, 19/1/44. He insured with Study, 11/43 for a Civil Halifax scheme, HP.64.

After highly fraught UN Air Transport discussions, Chicago, 11-12/44 Swinton by 12/44 extracted orders for 79 Tudors for BOAC, Qantas, S.Africa (Howe, visionary Minister for Reconstruction...and Everything), had fled to (to be) C-4M).

So, OP, no. Formal invitations to tender were offered to no-one. Miles tried hard to interest Cripps in blended X-craft, so he diverted them, 10/43, onto Experimental supersonic M.52.

Post-War story is too long for here, culminating in T.175 Britannia as both Medium Range Empire and Long Range Empire: others, including Bristol's seniors and betters, were invited for those, Bristol competing with themselves with licensed Connies.

Ministers were, ah, courageous in doing all this when we were, in early-1943, not investment grade. I have met 1st. Lord Brabazon's son. I have a sense of affinity with his Committee: appointed with great expectations, unrealised (the ladies of my family are of much the same opinion re. me).

Brabazon was working with one hand tied behind his back from the start. The timeframe for Committee 1 was far too short, starting before Christmas and expected to deliver late Feb, and had to be carried out with MAP and AirMin staff exclusively and in secret. He was able to send out a very generalised questionnaire to the SBAC to be forwarded to selected companies, but this, too, was rushed and the answers provided little real guidance. BOAC were hardly consulted at all, although they did write a broad-brush view on what sort of post-war services may be required. The Committee's first report was drafted and rewritten several times in the closing days before it was submitted. In truth there is not much substance to it, most a continuation or pre-war thinking. Clearly, a great deal of lobbying then followed: Bristol's view on Type 1 at some variance with Brab and BOAC thinking, Avro pushing for Lincoln-based airliners sort-of to Type 3, Airspeed essentially re-writing Type 2. The flying boat boys, aghast at the lack of any marine aircraft amongst the Types, pushing for a civil Shetland and more. Brabazon was quick to more or less disown the process, which is fair as he was not the decision maker, and spoke many times in the Lords that the whole thing needed to move faster.

From this British book.