Always a fan of low cost, low powered aircraft that seek to bring flying within reach of ordinary folks, here is one of my favorites, the Boulton Paul P.41 Phoenix.

Intended as an inexpensive private aircraft to undercut the DH Moth, it first flew in 1929 as an all-wood "proof of concept" demonstrator with the cranky ABC Scorpion. The next year the single prototype was revised to production standard as the Phoenix II with a new welded steel fuselage, revised landing gear and a Salmson AD9 radial. Note the very simple constant-chord wing and the all-moving, interchangable horizontal and vertical tail surfaces with a horizontal (not vertical) fuselage endpost to allow the stabilizers to attach directly to the fuselage. 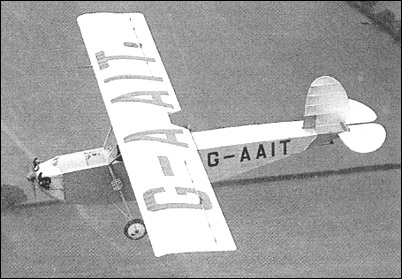 Despite reportedly docile handling, the lack of a truly reliable, low-cost engine (something more powerful and reliable than the ABC but cheaper than the Salmson) killed production hopes. Just a few years later, J.A. Prestwich started license production of the 40 hp Aeronca-JAP J-99 (E-113-C), which would have been perfect, but by that time Boulton and Paul had lost interest in little planes for private pilots.

The wonderful Richard Riding book, Ultralights: The Early British Classics, has a nice little chapter on the Phoenix. Wikipedia has quite a bit and I have attached a page from the FLIGHT online archive.

A slightly different view from Alec Brew "Boulton Paul Aircraft", with the caption mentioning a problem,
that may have been another reason for the lack of enthusiasm.

True enough, though in my opinion that caption is a bit unfair as any high wing or biplane aircraft will appear to have shockingly poor visibility if you deliberately take a photo from the "blind spot." We are not used to seeing photos from that angle, certainly not air to air, since normally the pilot would want to keep the photo plane in sight at all times. I don't see how the pilot's view in the Phoenix is substantially different than other high-wing, tandem-seat lightplanes that are flown solo from the rear seat, notably the enormously successful Piper J-3 Cub and its forebears.
Share:
Facebook Twitter Reddit Pinterest Tumblr WhatsApp Email Share Link