Patents acquired by established aircraft manufacturers occasionally illustrated the claim using drawings of ‘real’ aircraft projects rather than generic concepts. One such example is GB429948, a scheme for a composite aircraft from Boulton Paul in late 1933. The bomber in the illustration is clearly a project that the company had under development that year as the text includes specific details of the aircraft, not actually relevant to the patent claim.
When Air Ministry specification B9/32 was issued the Disarmament Conference was still in session and one article under review was a limitation in the empty weight for bombers. Although it was obviously counter to the intent means were sought to enable a light aircraft to carry a heavy load, and a composite arrangement was one possible solution. B-P suggested that the bomber would be the lower component of the composite with the upper being a light aircraft with large wing area that served to aid the heavily loaded bomber into the air. B-P’s main proposal to the specification was the conventional P.70, a militarised development of the P.64 Mailplane, while for the composite they suggested a monoplane with retractable undercarriage. There are no indications that the project was taken further, either as part of a composite or as a conventional aircraft.
From the patent:
Span 63ft
2 x 650 hp engines
Max speed 250mph
Loaded weight 15,000 lb
Military load 1500 lb
Crew 3
Drawing cleaned up and gently modified from the original.
A later patent amended the design as a twin-boom to allow for a tail turret to be added 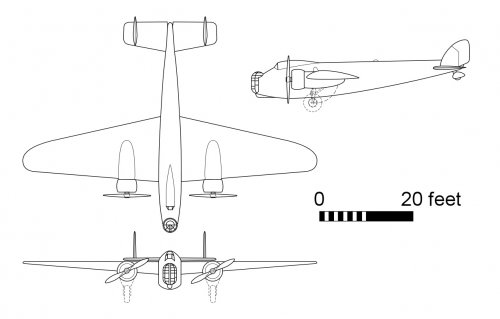 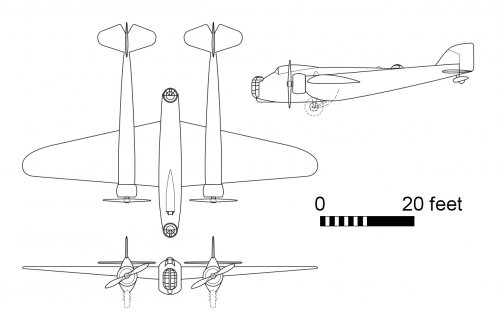 Really nice : seems be a version monoplane of Boulton Overstrand.
Last edited: May 6, 2019

Yes, it would have been designed around the same time as the Overstrand and appears to make use of the same nose turret. There is a long history of shared design features for John North's aircraft and projects so there is a distinct 'house style'. He may have been wise to have pursued this monoplane design rather than stay with the more generic Overstand, P.70 and P.80 biplanes.
Last edited: May 6, 2019

I agree this design may well have been a better choice than the Overstrand in the longer term. It is certainly an interesting design and shows what could have been possible.
The twin-boom version would seem to have relatively limited arcs of fire for the tail turret, but shows that even by 1933 turrets were being considered as useful for aft-facing gun positions as well, rather than just being a solution to the slipstream issues with front open ring mounts.

I haven't seen the full text of spec. B.9/32 but I understand that a rear gun was a requirement and front gun encouraged. The B&P nose turret had only a small degree of rearward coverage. The twin-boom looks like a quick and dirty attempt to incorporate a full rear turret, although I agree that the arc or fire would have been restricted. Had North continued his the basic design he would have ended up with something intermediate between the Hampden and the Blenheim, filling a gap that wasn't really there.

Surely Vickers Welligton and Handley Page Hampden were better than this version monoplane of Overstrand .

Yes, by a wide margin

airman said:
Surely Vickers Welligton and Handley Page Hampden were better than this version monoplane of Overstrand .
Click to expand...

I would say yes.
This of course is an early design and a patent design rather than a formal submission. With a similar size to the Hampden its not beyond possiblity that a version with a couple of decent 900-1,000hp Bristol Pegasus engines that it would have been competitive with the Hampden and the prototype Vickers Type 271 'Crecy', K4049, before it was redesigned to become the Wellington we know.

I think that the weakness for further development was the use of the bulky Overstrand turret. No doubt B&P realised this as for spec B3/34, for a somewhat larger bomber, they came up with the far more advanced P79 with all-new turret designs.
Share:
Facebook Twitter Reddit Pinterest Tumblr WhatsApp Email Share Link