A Chinook with wings?

Abstract : The US Army Aviation Systems Test Activity conducted the Phase II technical evaluation of the Boeing-Vertol Model 347 winged helicopter during the period 3 through 11 April 1972. The Model 347 winged helicopter, a derivative of the CH-47 transport helicopter incorporating a variable incidence wing with normal acceleration load-sensitive flaps, was tested at the contractor's facility near Philadelphia, Pennsylvania. The evaluation was conducted to determine the improvements provided by addition of a wing system to a transport helicopter. Compliance with the provisions of military specification MIL-H-8501A was determined. Evaluations of the variable incidence wing system and the retractable landing gear system were also made. With the wing in the hover position, out-of-ground-effect hover performance of the Model 347 winged helicopter was similar to the unwinged aircraft. Both the winged and nonwinged Model 347 helicopter could hover out of ground effect using less power than could the CH-47C. Level flight performance at a heavy referred gross weight (54,000 pounds) was improved over both the nonwinged helicopter and the production CH-47C. Addition of the wing to the Model 347 helicopter did not significantly change the generally excellent handling qualities reported for the nonwinged version of the aircraft. The strong longitudinal stability exhibited by the aircraft reduced pilot workload in maintaining trim airspeed and pitch attitude. Only minimal trim changes in all control axes were required when transitioning between climbs or descents and level flight. (Author)

Anyone seen any pictures?

It has been repainted and is in far better shape than it looks in these pictures.

Eh, helicopter with the tilt wing?? What is the reason for that? I mean - is the air flow so important, that it is more valuable than tilting mechanism, additional weight, less structural integrity, etc... ?
E

If you tilt the whole wing, the structure and mechanism isn't that complicated, comparatively, and it works for the benefits the wing gives you in cruise.

Matej said:
Eh, helicopter with the tilt wing?? What is the reason for that? I mean - is the air flow so important, that it is more valuable than tilting mechanism, additional weight, less structural integrity, etc... ?
Click to expand...

Indeed the air flow is a significant issue. The downwash of the rotor driven air onto the wing is very undesirable. If you note most attack aircraft have very small wings that are used more for weapon storage than lift. The Russian designers seem to be less concerned than western designer though (Mi-24 and Ka-50/52). Large wing area under the rotor systems requires more power to conduct vertical take off. By tilting the wing of that size there is a significant decrease in the power required for the helicopter to take off and land.

Great, if unnatural looking, pictures. Doesn't seam to be much clearance between the front rotor and the wing 'hump'.


Woody said:
Both the winged and nonwinged Model 347 helicopter could hover out of ground effect using less power than could the CH-47C.
Click to expand...

Why would it (winged and nonwinged) use less power in hover? Were there other modifications?

Certainly the aircraft with wings will take more power than one without. For this particular aircraft I would note that it also has a four bladed rotor system, vice the normal three bladed system. I do not know if the aircraft had more installed power than the CH-47C which would also account for improved lifting power.

You wrote perfectly. I was querying the DTIC article I originally posted. Why if the aircraft had better performance even without the wing did it not get adopted as the new CH-47? I didn't even notice the 4 blade rotors which brings me to another thought: I guess it depends on size and spacing but I believed that 3 blades per rotor were the most for a tandem helicopter. Is there an upper limit? How many did the XCH-62 have?. Maybe they could try ones like on the Superstallion ;D.

At least, this project got as far as building a technology demonstrator
(from Aviation Week 1974_1-13)

from Flightglobal;here is a compound Chinook

The Model 347 was a CH-47A with a stretched fuselage, hydraulically-controlled lift-wing mounted above the center of the fuselage, and four-blade rotors. It served as a technology demonstrator in 1970 for the Army's HLH program.

It also had a small gondola for the winch operator that retracts into the belly, just behind the cockpit.

Photos below from Ray and the USAAM archives:

I find it interesting when I see helicopters with wings.

Obviously, they don't contribute to the VTOL capabilities of the aircraft; are they usually placed there to improve lift in forward flight and therefore possibly increase range? Admittedly, I don't know much about helicopter aerodynamics when compared to fixed-wing aircraft.

short version is yes, if you can unload the rotors by supplying wing lift, you can delay issues due to advancing blade drag and retreating blade stall, the bane of rotors. You can increase speed (a little bit) and improve your lift-to-drag ratio (more range).

Thanks for the pictures!

NASA study into possible use of the Model 347 as a civilian transport.

Not sure about changing it now.

The link in Post #1 is dead but I've found the following;

I've also attached a couple of reports that may be of interest.

Some oral history from a Vietnam Vet; apparently the 347 couldn't autorotate, but the additional rotor blades provided a smoother ride.

Following the Fire Bucket mission, you will hear a short tape I made from a 45 RPM record (remember those?) that the Boeing Vertol company put out [at 14:09]. After first tour in 68-69 with the 147th Hillclimbers, I returned to Rucker to become an 1P, Flight CDR, and then Assist Branch Chief of the Multi-Engine Branch at Hanchey AHP. During this time, Boeing was at the test board at Cairns AAF testing a lot of concepts on the CH47 to include a model called the Boeing Vertol 347. They took an A model CH-47 (as I recall) and cut the fuselage at a factory splice and made it about 4 feet longer. They cut the aft pylon off and raised it 30 inches and put back on. They then added two 4-blade rotor heads. The cockpit had really nice airliner seats with armrests (!), it had a retractable landing gear, and two new L-11C engines to top it off Lots of other ‘goodies’ on it too. Later they added a wing on each side to let it fly like a fixed wing at high speeds and to unload the rotor heads for straight and level flight. There was only one catch I was told… The beast could not autorotate. If it went down it went in like a F/W. Can you picture this thing? Well, anyway.., we use to meet with the Boeing engineers who would come and ask us what we wanted on a new bird, etc….. All we asked for was a second FM which hurt their feelings, as they wanted some fancy. (I think Chinooks have 2 FM radios today.) One interesting feature of the 347 was that with a 4-blade head, the rotor RPM was considerably lower than the A,B, and C models. As a result it was quieter, and it was pretty fast. However it just could not pick up anything with all this “stuff’ hung on it and the 347 was strictly a test vehicle.
Bob Patterson
(BlackCat 3 from 8-71 to 72 )
Click to expand... 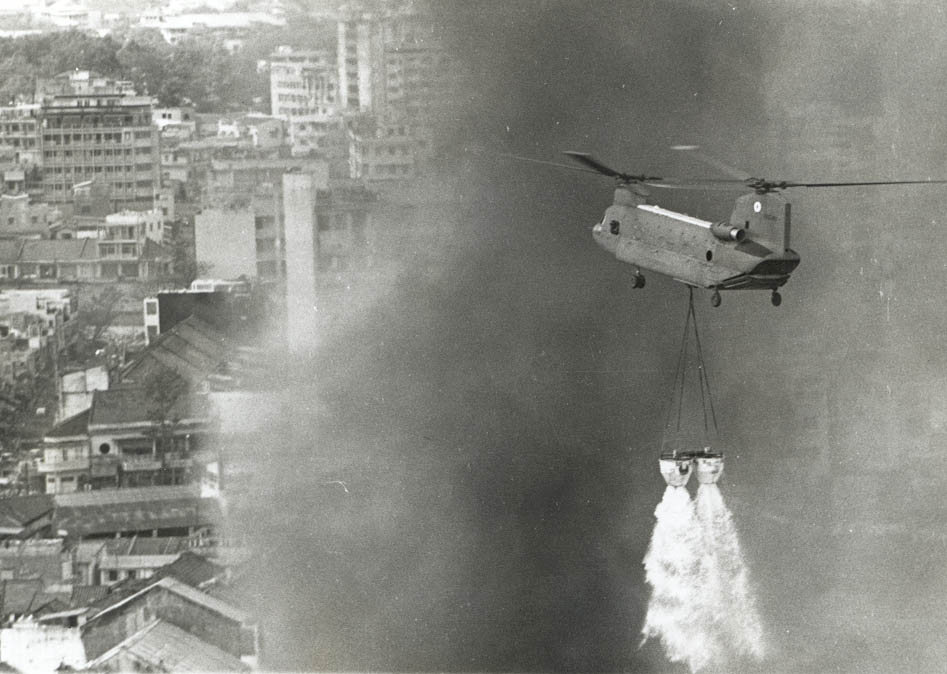 Also, the story of what might have been the first water drop by a helicopter on a fire